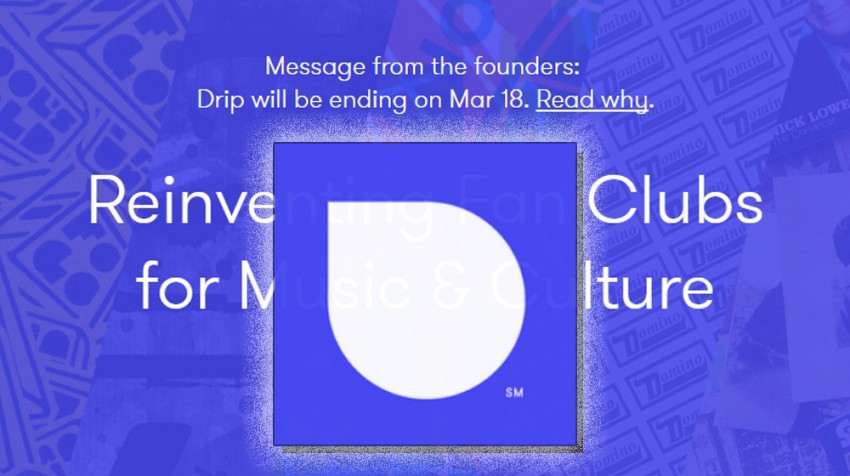 In an open letter published on Medium, the founders of the Drip music subscription service announced the music platform is closing on March 18.

News of Drip — a niche service that allowed fans to subscribe to indie artist communities — shutting down after just five years of it launching is a huge blow for many independent artists, labels and musical entrepreneurs.

The service which was affiliated with a number of independent labels and artists like Stone’s Throw, The Bunker, Mad Decent, Dirtybird among many others, was born out of a desire to generate revenue and support from music consumers to the artists directly.

“Fans joined these communities; they paid their favorite creators directly; and they got access to high quality, often rare and exclusive music plus more,” explained the company in the open letter announcing the service’s closing.

“From live events and guest list spots, to one-on-one hangs and exclusive products, we were constantly inspired by the types of interactions that Drip encouraged,” the company said in the post on the official company blog. “Some fans even landed jobs at the labels and others were signed as a result of being discovered in the platform,” founders Sam Valenti, Miguel Senquiz and the Drip team revealed in the post.

However, even after generating “millions of dollars” for artists in direct support from fans around the world, it seems that was not enough to keep the service open.

“At the top of the year we took a hard look at Drip, our future and the various routes we could take to get there. Between timing, funding, and everything needed to realize this future, we made the decision that now was the time for Drip to come to a conclusion,” wrote the team.

Sad as it may be to see the Drip music subscription service close up shop, it is worth noting that the direct-to-fan platform that sought to cut out the middle man by creating a subscription model where artists and labels could sell music content directly to fans had its work cut out for it from the start.

Creating a platform that helps artists profit directly from the music they produce online has been an ongoing challenge. This challenge has seen other players in the digital music space like SoundCloud adopt measures like opening up revenue sharing programs with its member artists, but the digital music industry has yet to see any real breakthrough with these business models.

Fortunately, though, independent artists, labels and musical entrepreneurs still have other options for engaging with fans and managing their careers. Alternative options to explore include direct-to-fan platforms like Nimbit, Bandcamp and ReverbNation, as well as streaming services like Pandora, Spotify and Beats Music.

Moreover, Drip revealed in the post that the company is committed to doing right by its creators and paying them in full before the platform takes a final bow.

Drip music subscription account holders have until March 18 to export their music and data. On March 18, 2016, the website will shut down and you will no longer be able to login or use your Drip account.