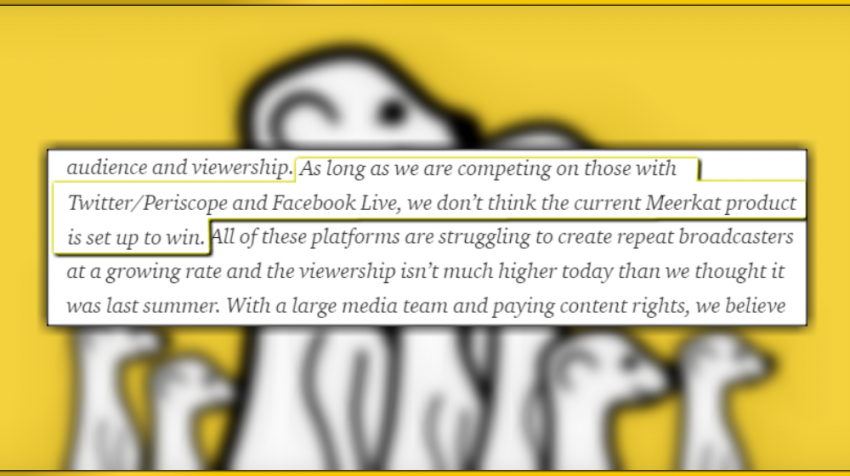 Meerkat — the live video streaming app — is throwing in the towel on live streaming. About a year ago, the startup was a favorite at South by Southwest (SXSW) festival, where the festival-goers were entranced by how easily they could use their smartphones to broadcast live video over the Internet.

However, even with the good reception, Meerkat’s case was a David versus Goliath story from the very beginning.

After garnering lots of buzz at SXSW, Twitter cut Meerkat’s access to its “social graph,” effectively making it harder for users to find and connect with their friends and followers on Meerkat’s service. To make matters worse, Twitter bought Periscope — a Meerkat competitor – reintroducing it as its own live streaming platform. And to make an incredibly competitive landscape even tougher, Facebook, the world’s largest social network, also launched its own live streaming service — Facebook Live.

Facing such odds, Meerkat truly didn’t have much of a choice other than to pivot to something new — or cease to exist. In a memo to investors, Meerkat’s CEO Ben Rubin says, “It’s hard to believe it’s been almost a year since we first launched Meerkat on Product Hunt. It has been quite a whirlwind and we have seen and learned a lot. The year started on a high note with the rapid explosion of live video, the excitement of SXSW, and the launch of Twitter’s Periscope. But over the year, it became rougher waters — mobile broadcast video hasn’t quite exploded as quickly as we’d hoped. The distribution advantages of Twitter/Periscope and Facebook Live drew more early users to them away from us and we were not able to grow as quickly alongside as we had planned.”

Given the challenges, Rubin is now transforming Meerkat into something other than a live video video. He, in fact, hinted at a new spin on the concept that focuses on streaming to smaller groups of acquaintances, family members and friends.

“We found the best Meerkat moments happened when people who knew each other (either in person or online) came together live and interacted in real-time,” Rubin said. “We saw this in the conversations when the threads would go on and on and on. We especially saw this in cameo when broadcasters were able to see their audience and interact in a more human way, people passed around the camera for a campfire chat session.”

The details about this new venture are still sparse, but Recode speculates that the new service will more likely resemble Skype or Google Hangouts than a broadcasting feed, connecting people who know each other as opposed to connecting total strangers.

Meerkat hasn’t yet disclosed when it will launch the new product, but it’s something those interested in the networking potential of live video will want to watch.