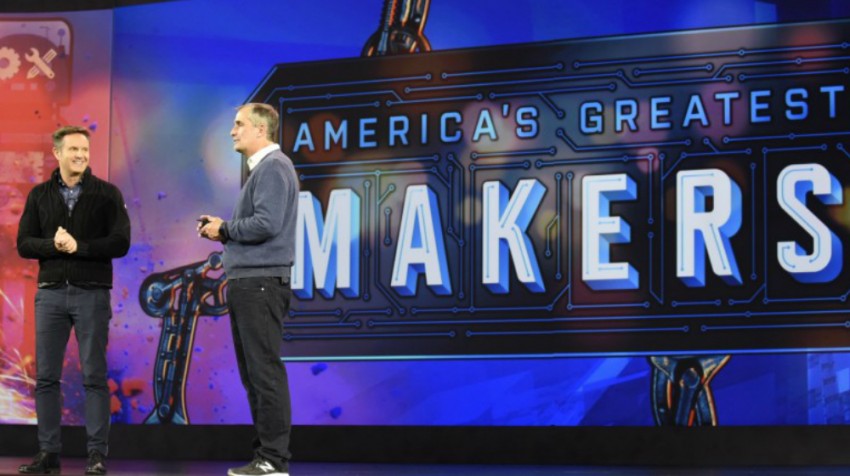 Who doesn’t enjoy a unique television show — one that goes beyond mere entertainment to offer useful business ideas and life lessons, and drive business results that matter? Mark Burnett, six-time Emmy winner and producer of “Survivor,” “Shark Tank,” “The Voice” and “The Apprentice” has a new television show coming this Spring called “America’s Greatest Makers.”

The Making of “America’s Greatest Makers”

“America’s Greatest Makers” is an unscripted reality TV show documenting makers taking a product to market. The show aims to come up with the next big thing in wearable tech and smart connected devices by pitting 24 teams of makers from across the country that fly to Los Angeles to pitch their latest game-changing technology in a head-to-head competition for a huge cash prize.

Intel CEO Brian Krzanich announced to the crowd at the Intel Developer Forum in San Francisco last year that his company, Burnett’s United Artists Media Group and Turner Broadcasting System are collaborating to produce the forthcoming show, and will award $1 million grand prize to the winner.

Casting submissions for the show have already concluded. The submissions consisted of a written application, small video describing the product idea and the prerequisite fine-print signatures. If you’d like to stay in the loop on some of the wacky and brilliant innovations already submitted, you can follow the #americasgreatestmakers on Twitter.

It is worth mentioning also that contestants were not excluded from casting considerations if they didn’t already have a working product. Producers are banking on this allowance to create some interesting drama on the screen as contestants experience the rigor, highs and lows of product creation.

The show will also include speed pitches to tech industry experts among them Intel CEO Krzanich, truTV’s co-host of “Hack My Life” Kevin Pereira and business and financial expert Carol Roth, Turner Broadcasting said in a press release.

Although only one team takes home the grand prize, “the reality is that everyone on the show is a winner,” Roth told Small Business Trends. “From the resources that they receive, to the community connections that they create, to receiving exposure for their products to millions of people around the world, every single competitor ‘wins’ on many levels.”

The Premier of “America’s Greatest Makers”

The season premier of “America’s Greatest Makers” series comes to TV Tuesday, April 5, 2016 at 9:00 P.M. ET/PT and will run on TBS Network along with digital episodes that will be available between the more traditional linear TV episodes.

Steve Fund, Intel’s chief marketing officer, has also hailed the “powerful stage” offered by the collaboration of Turner Broadcasting and Burnett, and the potential of what amounts to a nationwide talent search and innovation showcase.

The show is part of Intel’s global initiative to inspire ideas and fuel innovation.