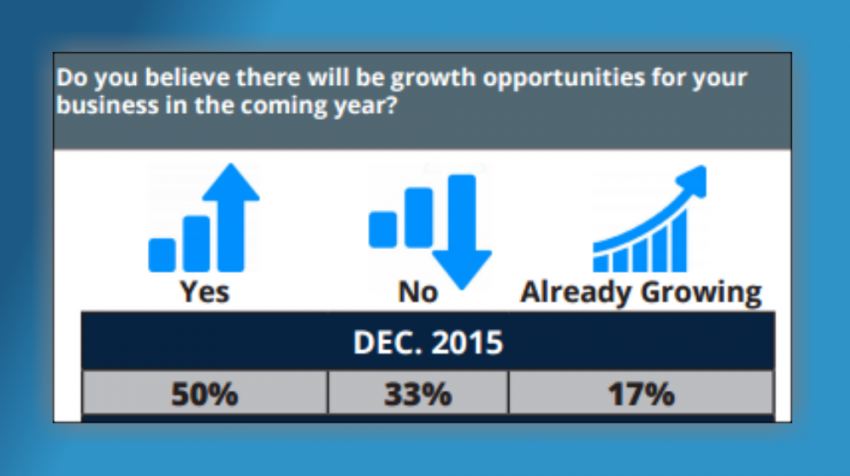 A full half of small business owners see growth opportunities in the next six months, while 17 percent say they are already seeing that growth.

Only 33 percent say they see no immediately growth opportunities ahead. That’s according to the most recent survey by the National Small Business Association.

According to the National Small Business Association’s 2015 economic report (PDF), nearly 75 percent of small business owners surveyed are confident in their businesses — the highest percentage recorded in the last four years. However, there was a relatively less positive outlook among the small business owners on the overall economy than even six months ago.

About 32 percent of the respondents in the NSBA economic report said that the economy, as compared to six months ago, is worse; whereas in July 2015, that number was 28 percent, when asked to compare it with the previous year. The survey also highlighted that 58 percent of business owners were projecting a flat economy in the next 12 months.

Interestingly, when these small business owners were asked if they thought that the present-day national economy was better off than what it was 5 years ago, around 53 percent gave a positive response.

When asked in the NSBA economic report what they would see as the most imminent challenge to future growth, 49 percent cited economic uncertainty, closely followed by cost of health insurance, decline in customer spending and regulatory burdens. The volatile stock market is being seen as one of the major reasons of the slight negative outlook among these small business owners.

NSBA President and CEO Todd McCracken says, “While small-business owners are more concerned with the economy, we’re seeing modest improvements in hiring, employee compensation and access to financing. This dichotomy is not surprising giving the recent stock market volatility and rhetoric surrounding the 2016 election.”

Although there is an increase in small business access to capital, one in four small firms are still unable to to access the capital they need, the report says. However, the percentage of firms with access to capital is still pretty high at 73 percent. About 57 percent of these firms were able to improve employee compensation over the last 12 months. And 60 percent plan to do so in the coming year. Both these percentages are at an 8-year high.

NSBA is a 65,000-member organization advocating on behalf of U.S. entrepreneurs for the last 75 years.