With Right Side Ads Gone on Google, Was it Disaster as Predicted? 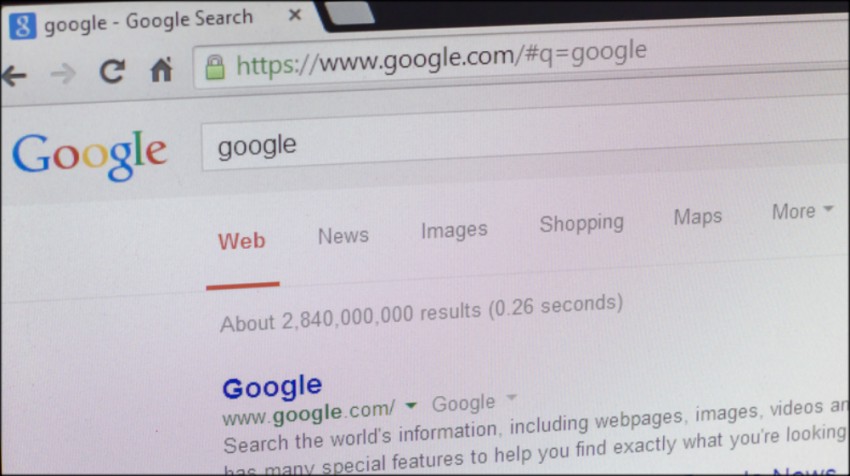 It’s been about a month since Google confirmed the death of right sidebar ads for desktop search results. Immediately following the change resulting in right side ads gone from Google search results, a hot topic of rampant speculation throughout the search industry was how much CPCs would skyrocket. 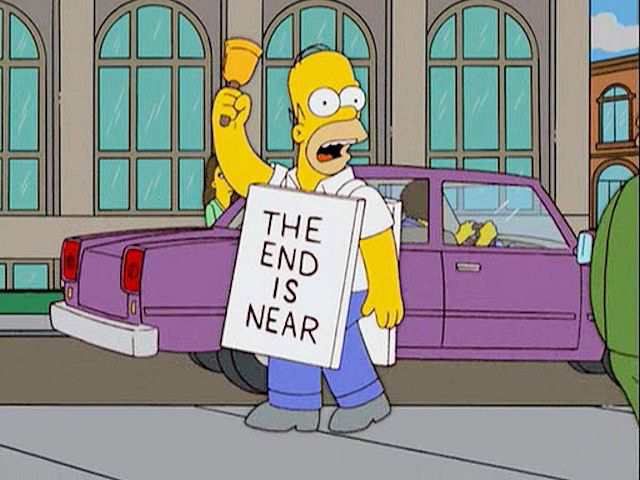 Here’s just a sampling of comments on the change with right side ads gone, from Search Engine Land’s Facebook page:

Even Perry Marshall cried “DANGER,” calling it the biggest Google AdWords shakeup in more than 10 years and warned: “Your strategy for Google AdWords is going to totally change.”

Well, now it’s nearly a month later, and the data actually shows a very different story — and by different, I mean the same. Very little has changed.

What HAS and HAS NOT Changed With Right Side Ads Gone

We’ve updated our proprietary data on the effects of the SERP shake-up (see full details on our data sources at the end of this post).

Click-Through Rates (CTRs) are Up 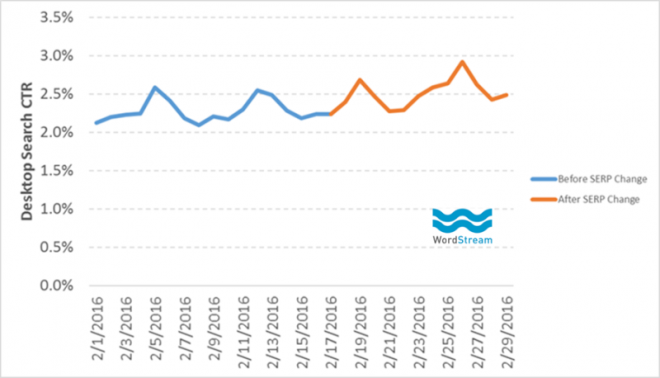 As the data from thousands of WordStream accounts spanning all industries shows, click-through rates (CTRs) are up. No real surprise here.

It was expected that having a fourth spot above the organic results would mean more ad clicks. The surprise, as I discussed last month, was that the ad in the third spot, not the fourth, got the biggest boost from the new desktop SERP layout.

Here’s one dire prediction I saw on Twitter: “No right side ads = hello 3x increase in CPCs.” Many marketers feared less ad space would result in CPCs going through the roof.

Well, this is why smart marketers don’t base their strategies on predictions. Because the data tells the actual story: 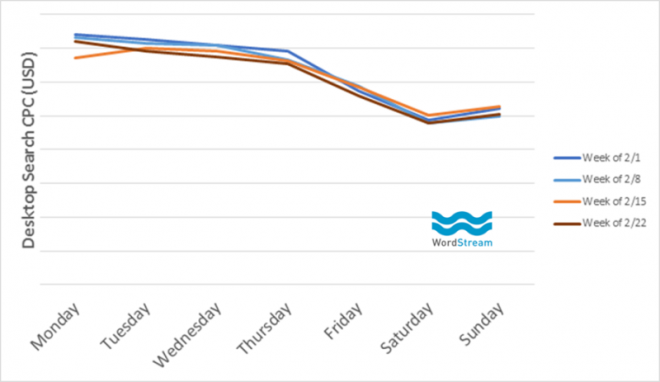 If anything, costs per click have gone down some with the right side ads gone, as shown in the chart above.

More good news for PPC marketers: click volume, for the most part, has been steady. There have also been some modest wins: 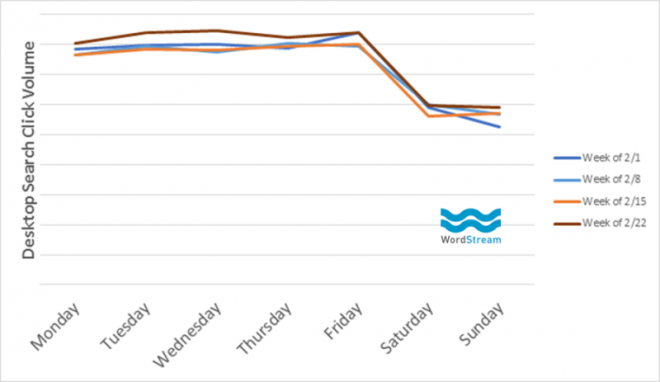 So we’re looking pretty good, right? CTRs are up, and clicks are mostly constant. Does that mean impressions are down?

Before the change, it was possible for searchers to see up to 11 ads per search results page. Now, with right-side ads gone on desktop, Google users will see no more than seven text ads.

So yes, this change has resulted in a decline of ad impressions. The loss of desktop impression share mostly affects those who appeared in the eighth position and lower: 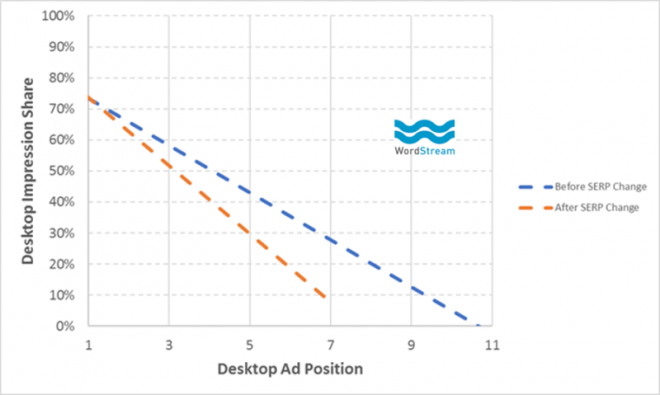 Although this chart may look kind of catastrophic for those below position 7, it really isn’t a huge change. Why? Because positions 8 to 11 made up a mere 0.2 percent of all desktop impressions: 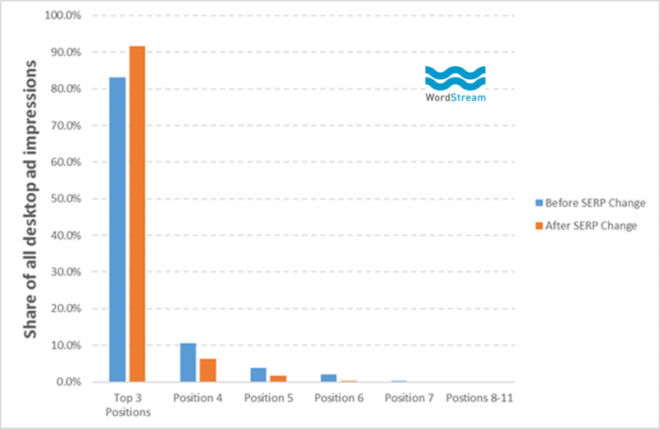 A Quick Note on Averages

There has been some noise lately about how averages don’t tell us anything useful for strategy in PPC because every advertiser is different. I disagree. As long as you’re using proper math — checking the sample variance and standard deviation for your data set to make sure the variance isn’t too high — averages can tell you a lot, because the vast majority of advertisers will fall into the standard distribution. More on this here.

Anatomy of a “Loser”

Every change to the Google SERP has winners and losers. If a win in this case means higher CTRs, lower/steady CPCs and steady/more traffic, what does a “loser” look like?

In an effort to provide a thorough analysis, we set out to find examples of accounts that truly suffered as a result of Google’s removal of right ads from the desktop SERP.

It wasn’t easy. After poring through tons of accounts and data, however, we finally managed to find an interesting example from the financial industry. So let’s take a quick look at the “struggles” of one advertiser.

Prior to the change, they had an average position of 8.6 on desktop. After the new SERP rolled out, they got killed, losing 80 percent of their desktop impressions:

But here’s where it gets interesting. Their CTR more than doubled:

As a result, the advertiser only lost 15 percent of their desktop clicks, which fell from 26 to 22:

Also interesting is that this advertiser saw CPC increase from $0.53 to $0.69:

But wait! It gets even more interesting, because their average position went from 7.5 to 4.3 after the change.

So, overall, not a terrible deal for this “loser.” This advertiser is now paying $0.16 more per click, but it’s for vastly more valuable space on the SERP.

The fact that an advertiser with an average position of 8.6 didn’t get wiped out — especially considering Google eliminated ad positions 8 through 11 from the SERPs — is of major significance.

What does it mean? Well, it leads me to believe that Google is sharing the impressions a little bit, as opposed to using a “winner takes all” approach.

Don’t Believe Everything You Read on the Internet

Okay, so here’s what we now know about what was overhyped as the most dangerous change Google has ever thrown at us:

Finally, it’s important to remember that this change is exclusive to desktop. Regardless of how you spin the numbers, it’s clear that desktop is becoming less of a focal point for Google: 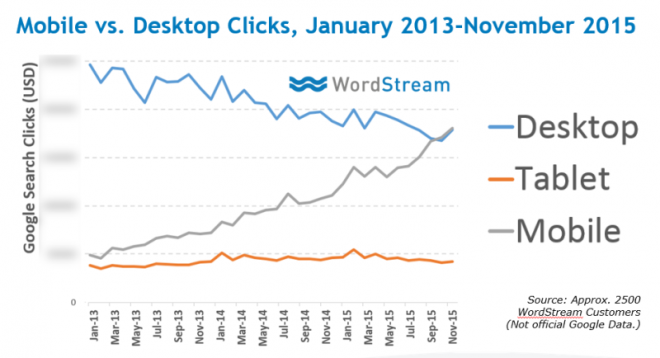 Remember, brave search marketers: The only thing we have to fear is uninformed speculation. Don’t panic whenever Google changes something. Be patient. Collect and analyze your data. React smartly.

This wasn’t the first huge change we PPC marketers have lived through. And it definitely won’t be the last!

This report is based on a sample size of about 2000 client accounts representing small businesses and medium businesses (SMBs) in all verticals in English-speaking countries worldwide (including the United States, Canada, UK, Ireland, Israel, Australia, and New Zealand), advertising on the Google AdWords search network (desktop only) in the date ranges indicated on the charts.