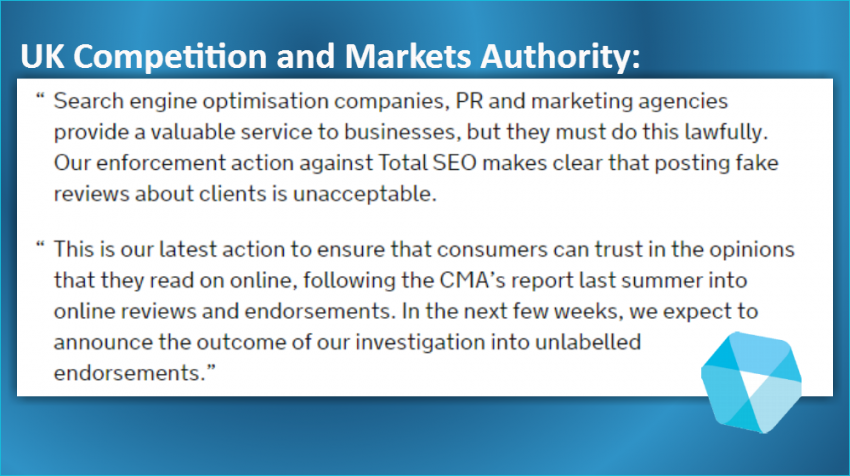 When consumers read online reviews of a product or business, such as those on Amazon, it is often difficult to figure out which reviews are legitimate, and if they should trust any of the opinions that they read online these days.

The situation is not helped by companies and marketers going out of their way to post hundreds of fake online reviews with the view of unduly influencing consumers’ buying decisions.

During its investigation, the CMA said it had found that Total SEO, a search engine optimization (SEO) and online marketing company, had posted hundreds of reviews on behalf of 86 small businesses, ranging from car dealers and mechanics to landscape gardeners and other tradespeople, across 26 different websites.

Total SEO has co-operated with the CMA’s consumer law investigation and escaped a financial penalty. However, the SEO company has been ordered to remove the fake reviews it has already posted and will suffer the additional humiliation of having the CMA writing to its client base to caution them about the company and the illegality of asking firms to write reviews on their behalf.

“With more than half of people in the UK using online reviews to help them choose what to buy, they are becoming an increasingly valuable source of information. Fake reviews can lead to people making the wrong decisions and fair-playing businesses losing out”

Back in the U.S., the New York state attorney general’s office caught 19 companies in 2013 for offering to create fake reviews after an undercover investigation in which employees from the Attorney General’s office posed as the owners of a Brooklyn yogurt shop that was trying to up its online ranking. The 19 companies identified  by the investigation agreed to cease manipulating sites like Yelp, and were forced to pay more than $350,000 in fines.

Authorities persistently warn companies against unfair or misleading business practices, such as falsely representing themselves as consumers.  These activities, they insist, hurt both consumers and fair-playing businesses. The CMA says companies in the UK found guilty of posting fake reviews can receive a heavy fine or, in some cases, see its directors given a prison sentence.

Individuals who write and post fake online reviews, or who blackmail business owners or companies with threats of posting negative reviews about them, can also find themselves in hot water. As recently as October 2015, Amazon sued 1,114 users it identified during an investigation conducted by company representatives who attempted to buy fake reviews from gig site Fiverr.

Similarly, William Stanley (a.k.a William Laurence, William Davis, William Harris and Bill Stanley) was this year sentenced to 37 months in prison after he was found guilty of threatening to write negative reviews and comments about the Dallas-based mergers and acquisition firm Generational Equity unless he was paid.

The court also ordered Stanley, who was initially recruited by the firm for SEO services and reputation management, to pay $174,888 in restitution to a dozen victims.

“Search engine optimization companies, PR and marketing agencies provide a valuable service to businesses, but they must do this lawfully. Our enforcement action against Total SEO makes clear that posting fake reviews about clients is unacceptable,” Arora added.