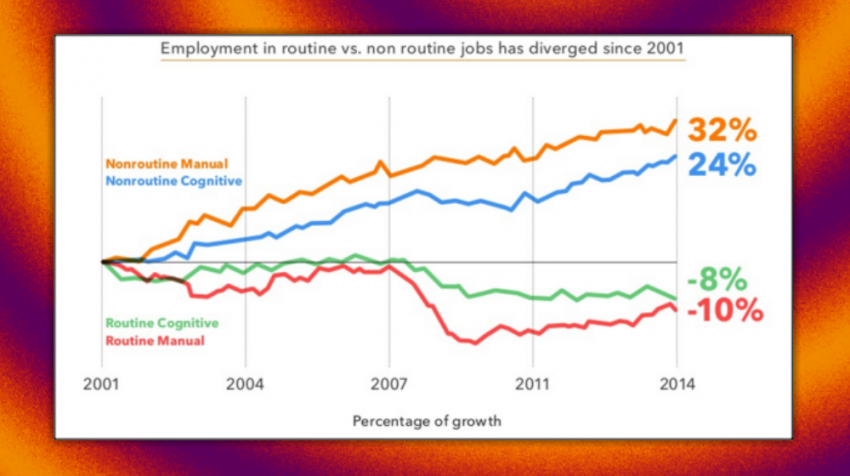 Not too long ago, the only people who looked for “gigs” were musicians.

Today, however, it is difficult to escape news of the growing gig economy. Reporters and analysts are sharply focused on upstart ride-for-hire platforms like Uber and Lyft and online delivery platforms like Instacart, as well as the workers in these on-demand services.

And while the emergence of the so-called gig economy has been exciting (and disrupting, too), a new report by Thumbtack, an online marketplace that helps skilled workers find customers, paints a bleak picture of the future of the low-skilled gig economy as we know it today.

The Future Of The Low-Skilled Gig Economy

The authors of the report explain how this will go down:

“The narrow focus on low-skilled ‘gigs’ misses a larger story,” Jon Lieber, chief economist at Thumbtack, and Lucas Puente, an economic analyst at the firm, say. “These relatively commoditized, undifferentiated services are supplementing income, not generating middle-class lifestyles. Moreover, these [low-skill] tasks are overwhelmingly likely to be automated over time, performed by self-driving cars and drones.”

Predictions like these about how low-skill jobs will ultimately be lost to robots vary widely. Research and advisory firm Gartner predicted late last year that more than three million workers will be supervised by a “robo-boss” by 2018.

Forrester analyst J.P. Gownder forecasts that 16 percent of jobs will disappear due to automation technologies between now and 2025, but that jobs equivalent to nine percent of today’s jobs will be created. The new jobs that are created will essentially be highly skilled ones.

“Physical robots require repair and maintenance professionals — one of several job categories that will grow up around a more automated world,” Forrester analyst J.P. Gownder wrote in his report.

The report by Thumbtack predicts that logistics companies ranging from tech giants like Amazon and startups like Uber will soon replace drivers and delivery workers with autonomous vehicles and drones. Amazon has already said it is testing the use of drones to deliver goods to customers through Amazon Prime Air, a conceptual drone-based delivery system that it patented last year.

What Jobs Will Flourish In The Gig Economy?

Jobs that require a high level of creativity, emotional intelligence or other unique skill sets, however, are unlikely to be automated soon. For example, school teacher or music instructor jobs are relatively safe because of the elevated level of social intelligence required to teach and mentor children.

Skilled workers in these professions that require a high level of creativity, emotional intelligence or other unique skill sets – who are no longer guaranteed jobs at big companies — will fill the vacuum left by the low-skilled workers displaced by automation in the gig economy. Thus they will essentially become the new gig economy workers of the future, the report says.

Among the reasons cited for highly skilled workers eventually dominating the gig economy is because the skilled pros are not offering commodity services. They are offering specialized trade. They are not looking to complete a short task as a side job. They are seeking full-time, but time-limited projects.

And the skilled pros are turning to the Internet to build their client base and their businesses using cost-effective, performance-based online platforms, such as Thumbtack, Upwork and Etsy that weren’t available 20 years ago.

The report adds that highly skilled pros are being empowered by technology — not being replaced by it. The pros have higher job satisfaction, make more money on average because they can negotiate pricing under their personal brand, and do not need a college degree to earn enough for a middle-class lifestyle.

In the meantime, though, the contractors working for all the gig employers and the total number of people making their living primarily from the gig economy remains marginal. Full-time jobs are presently dominant.

That said, the gig economy is growing and evolving, providing people with a chance at flexible employment to supplement their income, or get them through a job loss in a way that did not exist before.