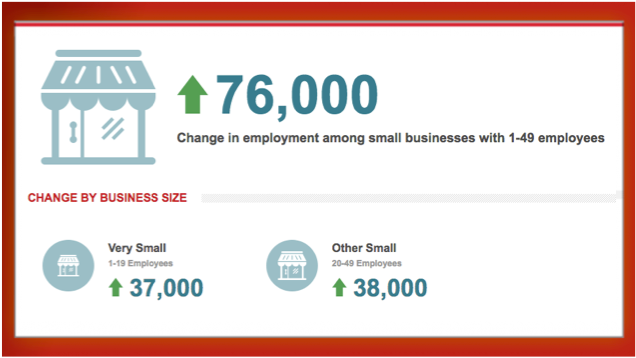 Job growth among small businesses continued to rise in February, sparking optimism that the trend will persist for the remainder of the year.

Small businesses with 1 to 49 employees created a total of 76,000 jobs in February, according to the monthly jobs report from human resources management company ADP, in partnership with Moody’s Analytics.

The number represents more than 35 percent of the overall job market growth and is, coincidentally, equal to gains by large companies — those with 500 or more employees. Companies with 1 to 19 employees hired 37,000 new workers while those with 20 to 49 employees brought on 38,000, says the report.

Newly updated numbers show that February job growth is in line with January’s report. Previously, January showed gains of 79,000, but those figures have been downwardly revised, to 75,000.

According to Mark Zandi, chief economist at Moody’s Analytics, the pace of job growth is double what is necessary to absorb the labor force increase.

“For the first time in 10 years, the economy is back to full employment, which means that everyone who wants a job can find one,” Zandi says.

Three factors contribute to the sustained growth, says Zandi: A bottoming out of oil prices at around $30 per barrel, stabilization of the yuan in China, and financial market conditions that have remained steady for the last couple of weeks.

“It was expected that recent volatility in the global financial markets would have resulted in fallout in the economy, but that has not been the case,” Zandi says. “Despite market prices that were previously overvalued, there has been no weakening in the labor market. The American job machine remains in high gear. Energy and manufacturing remain blemishes on the job market, but other sectors continue to add strongly to payrolls.”

Zandi expects the economy should show full employment by mid-year, with unemployment rates falling to 4.5 percent.

With the labor market tightening, finding and keeping good employees is at a premium, which means it will become necessary for small businesses to offer incentives beyond just an increase in pay.

To remain competitive, companies should consider augmenting their benefits package with new features that include flexible work schedules, advancement opportunities and a stronger emphasis on training.