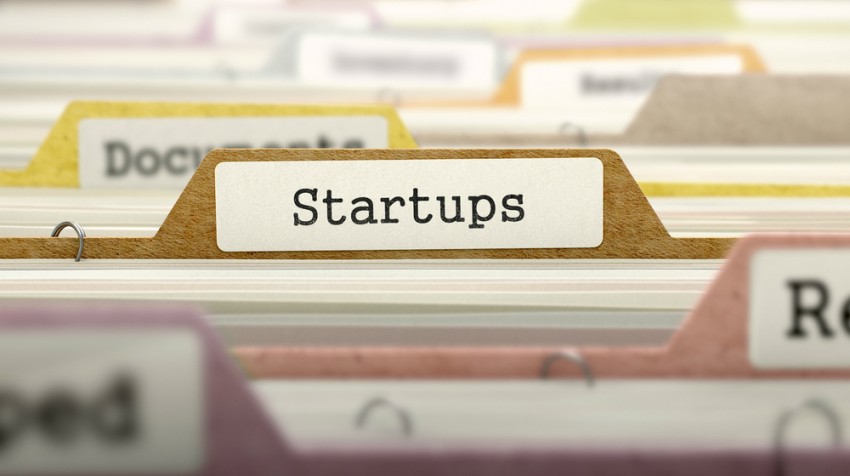 A few years back, I made a presentation on “Trends in Venture Capital” at a Federal Reserve Bank of Cleveland event. Every few months or so, I receive an email from someone asking me if I have updated the tables and charts in that presentation. Even though much of the data I used for that talk is available from the National Venture Capital Association, creating the charts takes a little reorganizing of the data. So, I don’t update them regularly and no one else seems to either.

Last week, Clay Rankin, the founder of the North Coast Angel Fund and a friend asked me the same question. I decided that I should update the slides. Since my best mechanism for disseminating the new slides is to post them in my regular weekly column on Small Business Trends, I am doing that.

Because posting an entire slide deck doesn’t work very well on the site, I will post a few of the slides at a time and explain them. I will be doing this by theme. This week, I am going to present the size of the industry. Next, I will turn to venture capital investments and finally to exits.

As you can see from the three slides I am presenting below, the venture capital industry is still working its way out from under a huge bubble created at the time of the Internet 1.0 (1999-2001). The explosion in the number of venture capital funds, capital under management and fund size led to a burst bubble and a continuing shake out.

When the Internet bubble burst, the industry had to contract back to an appropriate size. That process has been fairly slow and hasn’t been completed yet.

Figure 1 shows the amount of capital under management measured in inflation-adjusted terms. The thin black line shows the five-year moving average. Between 1995 and 2001, the amount of capital under VC management exploded from $55 billion (in 2008 dollars) to $319 billion. By 2014, it had declined to $142 billion (in 2008 dollars). Unless you believe there are several times as many high potential start-ups now as there were in 1995, or that today’s companies need much more capital to succeed, the amount of money under management is still too high and needs to decline further. 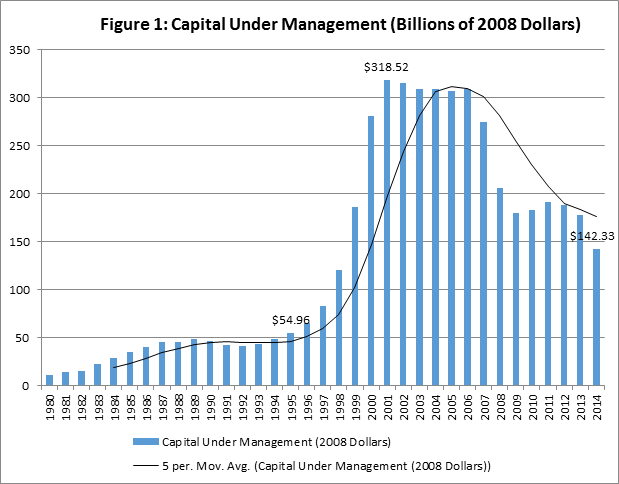 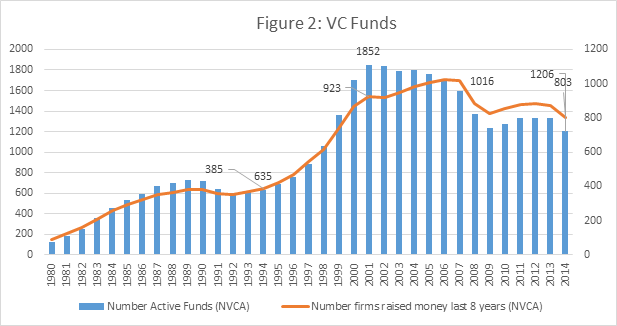 Average fund sizes have followed a similar pattern to capital under management and the number of venture capital funds, as Figure 3 indicates. The average fund more than doubled in inflation-adjusted terms between 1995 and 2001 and then fell by about 31 percent through 2014. As the five-year moving average — the dotted line in the figure — shows, the trend has continued to decline. And, once again, the average fund size in 2014 was much larger than it was in 1995, suggesting that the downward adjustment has not yet played itself out. 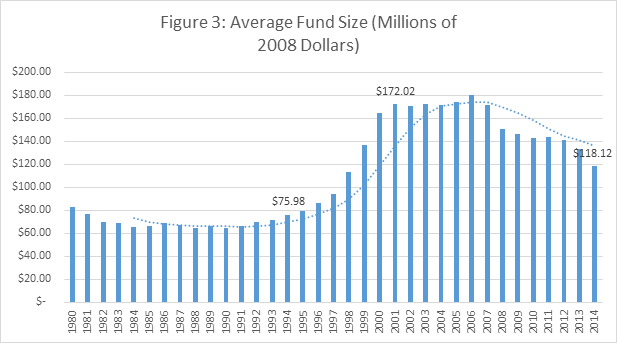