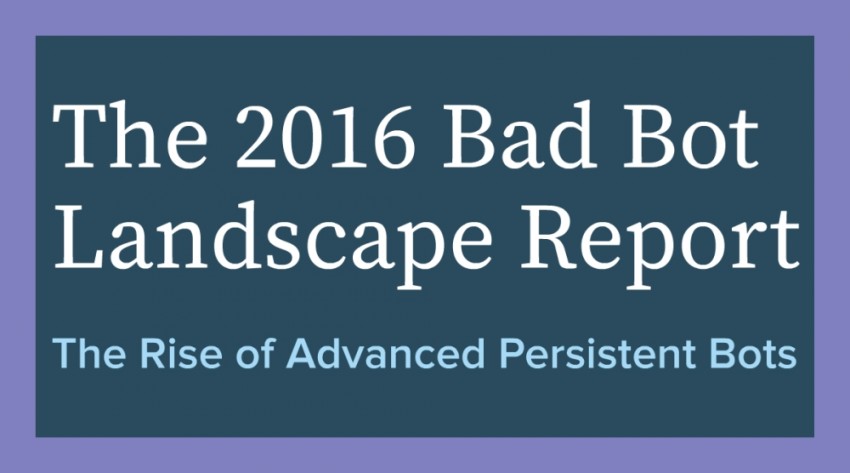 So whatcha gonna do, when they come for you? Because bots are coming and will continue to come, as they account for almost half of Internet traffic, coming in at 46 percent, with the remaining 54 percent made up of real live humans. Until very recently, bots made up the majority of Internet traffic, and it was only in 2015 when human traffic overtook bots.

The “2016 Bad Bot Landscape Report: The Rise of Advanced Persistent Bots,” which is published by Distil Networks, Inc., a global leader in bot detection and mitigation, reveals the state of bot traffic around the world.

The CEO and co-founder of the company, Rami Essaid, said 2015 was particularly bad for Advanced Persistent Bots (APBs), which mimic human behavior, load JavaScript and external assets, tamper with cookies, perform browser automation, and spoof IP addresses and user agents. These bots are particularly hard to detect, while being able to distribute attacks over hundreds of thousands of IP addresses. The Bad Bot Landscape Report highlights how bots are now more sophisticated and capable of evading traditional bot detection techniques.

Some of the key findings in the report include:

The country from which the largest number of bad bots originate is still the U.S, accounting for more than 39 percent of bot traffic. India comes in second, followed by Israel in third. Those countries moved up 8 and 11 places, respectively.

So What Are Internet Bots Anyway?

A bot, a word derived from robot, is software that performs and automates tasks over the Internet. Put simply, it takes over these time-consuming, routine, hard to accomplish or impossible tasks from people. So why is this bad? Actually they are not bad, but every good technology can be used maliciously.

With so many applications online, bots are used to ensure the services they are designed for are carried out efficiently. Everything from gaming to IM, as well as analytics, data gathering, Web indexing, live streaming and more is made possible with bots.

Without bots, it would take a very long time to access the information and services you need online.  Some of the good bots include: spider bots that explore content on websites; trading bots that locate the best deals online; and media bots that deliver updates on a range of services such as news, sports and weather. Googlebot, Google Plus Share, Facebook External Hit and Google Feedfetcher are some of the good bots, to name a few.

Hackers also use bots by installing malicious files to gain access into the personal computers of individuals as well as the networks of organizations. Some of the more popular malicious bots are:

How Bad Bots Can Impact Your Business

If you are a large company with large volumes of sessions every day, referral spikes of a couple of hundred a month may not impact your Google Analytics account. On the other hand, a local small business owner that is being bombarded with spam referral traffic is going to find it extremely frustrating to effectively use analytics tools. That is because the legitimate traffic is being stifled with all the Spam Bots.

These bots also use your server resources, which slows down access to your website as well as jeopardizing the overall security of your digital presence.

A website is a rich target for hackers. It not only provides valuable data that can be stolen, but it can also be used as a vector to launch different types of attacks. Bots play a big role in this, and it is up to you to find the right security provider capable of finding and eliminating the threats bad bots pose on your site. 2 Comments ▼