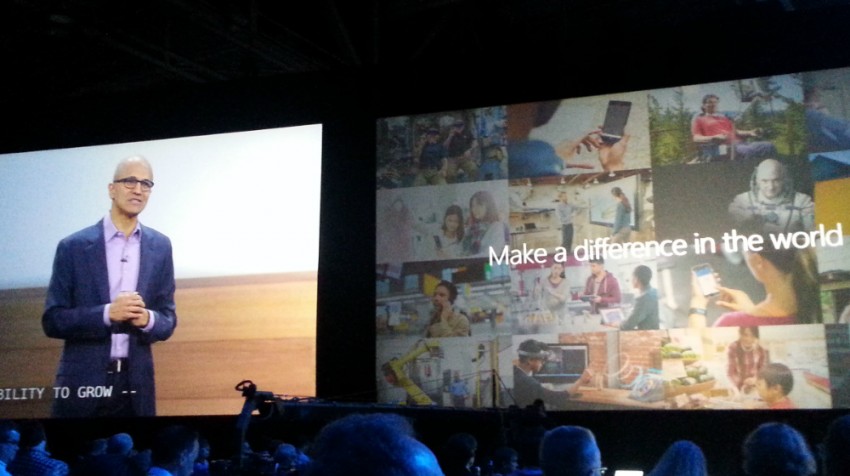 At the Microsoft Envision 2016 event in New Orleans this week, Microsoft CEO Satya Nadella (pictured above) outlined his vision of technology as transformational and challenged the audience and business leaders to use technology to “make a difference in the world.”

For Nadella, technology isn’t just a tool.  His opening keynote was filled with words about technology being not only being business changing but also life changing.

Often keynotes at large events like this feature a mixture of past accomplishments, news about new products available today and a look into what’s coming in the future. Nadella’s keynote had that mixture, with perhaps somewhat more focus on the future.

Nadella spoke of Windows 10 as more than a computer operating system, but as a platform that enables many other technology advances.

He said the growth of mobile computing “isn’t about mobility on one device, but mobility of the human spirit across all devices. And that’s what we set out to do with Windows 10 — building this one platform that is from IoT [Internet of Things] to Hololens.”

Hololens refers to Microsoft’s augmented reality computer that is worn as a headset. Using the headset, you can envision what something may look like as a holographic output, as for example seeing what a kitchen remodel might look like. You can even interact with the hologram.

Hololens has been released as a developer kit, to be used by other technology companies for creating applications.  While interesting and exciting, Hololens is not the kind of product release that will be immediately usable by most small businesses.  But it does suggest what the future may hold.

Nadella also spoke about the power of data in our businesses.  He highlighted Power BI, the Microsoft data analysis tool, and what it can help businesses accomplish through mining data and using it to make decisions real time.

Nadella discussed the concept of “conversations as a platform” that depends in part on Cortana, the digital assistant included with Windows 10.  He spoke of other artificial intelligence-enabled bots too.

If that all sounds like science fiction, it’s closer to reality today than you might think.  And it has more business relevance than might be apparent at first blush.

In explaining this vision of the near future, Nadella said, “The history of customer engagement has been shaped and reshaped by changes in the point of engagement and the nature of engagement. We are on the cusp of one such major shift.”

“Recall the first time your business created a website and you had customers interact with you as a business using the website. You had a two-way communication mechanism, an interactive mechanism that was unprecedented.”

“Since then, we have scaled to many other places. Today, we have applications that we deploy on mobile phones that are perhaps the most personal devices and they are always there.”

Nadella went on to add, “Going forward we envision a new platform which is going to be as powerful if not more powerful than the Web or mobile apps.  We call it the conversations as a platform.  It’s about taking the power of human language and applying it much more pervasively to all of our computers and computing.  And then using that medium for contact with businesses.”

“We will have new capabilities in computers to understand human language.  That means you have to be able to teach them through techniques of artificial intelligence and machine learning how to interpret human language and respond to human language.”

“You will also have new actors such as personal digital assistants that will be available to users all over.  And even bots — think of bots that you will build as the new websites or new mobile apps, and your customers will interact with your business through these bots.”

Nadella’s words were followed by a demonstration of Skype delivered by Microsoft’s Lilian Rincon. She demonstrated such techniques as video voicemail, interacting with Cortana from within Skype — and interacting with other businesses’ bots through Skype too.

I followed up with the Skype team afterwards and while they would not commit to a date, they said some of the demonstrated features would be released “soon.”  They also pointed out that today it is possible for companies to develop their own bots to interact with Skype users using the Skype developer tools recently released.

In other words, Microsoft’s future vision may already be close to something we can start to see and use today.

Nadella, however, did point out that we are only in the very beginning stages of the “conversations as a platform” evolution.