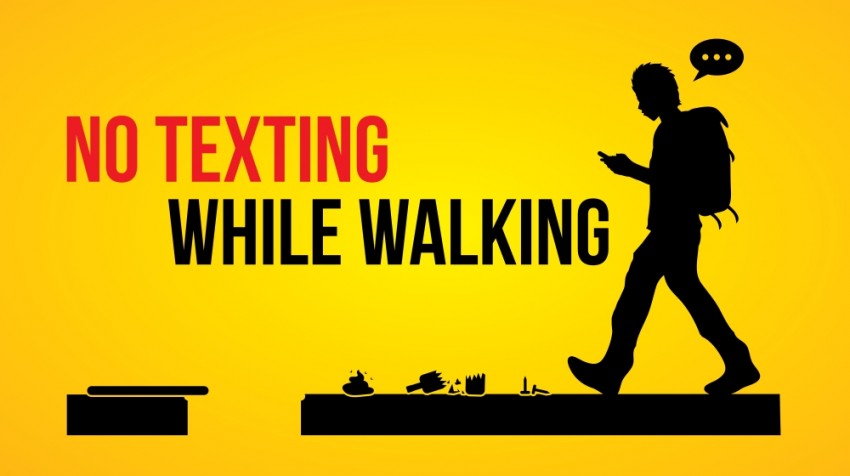 Smartphone users in New Jersey will have to break themselves of the habit of using their devices while out and about. Proposed by Assemblywoman Pamela R. Lampitt, a new “no texting while walking” bill hopes to impose a $50 fine for those caught walking on sidewalks or streets using their phones and other mobile devices without hands-free tools.

While the dangers of texting while driving are clear and common knowledge (and even illegal in 39 U.S. states, including New Jersey) the newly proposed legislation looks at the dangers posed by the so-called ‘petextrians’ as well.

While the basics of mobile etiquette are well known, texting while walking is something most people are guilty of. However, studies show that by taking your attention away from your surroundings, you greatly increase your risk of injury.

This distracted walking is believed to be the cause of close calls ranging from simply tripping on the sidewalk to walking in front of vehicles. Lampitt mentioned “I see it every single day,” and hopes this new fine proposal will make the distracted texter think twice.

But more than anecdotal evidence has led New Jersey to bring the hammer down on the practice of texting while walking.

A report by the Governors Highway Safety Association released in 2015 shows an increase in pedestrian fatalities citing texting as the cause. From 2009 to 2013, the amount of pedestrian fatalities increased 15 percent, and nearly two million injuries were reported to be cellphone related.

A survey taken by Safe Kids Worldwide found 40 percent of teens had admitted to nearly being hit by a car, motorcycle or bike while walking. Most said they had been texting, listening to music or talking on the phone.

Texting has become a main form of communication, so much so that app stores carry dozens of alternate SMS text messaging services for users. With this growth has come some problems, and Lampitt believes that the proposed bill will help cut back on some of them.

However, since smartphones have become a key part of daily lives, it’s no surprise that this proposal faces some slow going ahead. In 2014, there was a bill that attempted to designate September as ‘Distracted Walking Awareness Month,’ but it died in committee. Another bill proposed by New Jersey Gov. Chris Christie in January passed and established a Pedestrian and Bicycle Advisory Council.

However, this no-texting-while-walking bill hasn’t yet been posted for vote, and its future seems a bit uncertain. Lampitt acknowledged this by saying “If it builds awareness, that’s OK.”

Inflation is a Top Concern Inflation is of extreme worry with 93% of small businesses feeling troubled about it. If you can relate to that - SCORE can help.  Find out how!
Sponsored by SCORE
Get Featured