How Many Weeks Of Paid Family Leave Does The U.S. Guarantee? Zero. Wow! 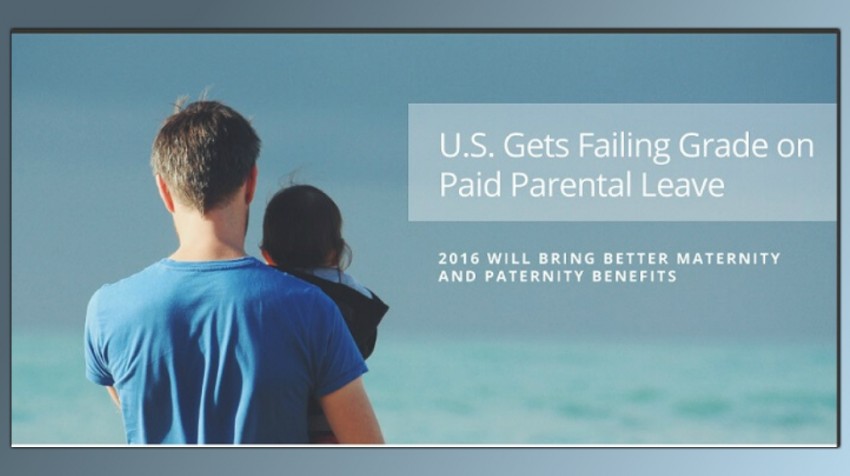 Most countries in the world require employers to offer paid family leave to new parents. So, how many weeks of paid leave does the U.S. guarantee? Believe it or not, the number is zero.

The U.S. is the only developed country in the world without mandatory paid parental leave. In fact, the U.S. joins Lesotho, Papua New Guinea, and Swaziland on the short list of countries lacking federally mandated paid leave for anyone. Granted a few individual states require paid leave, and around 10 percent of private employers offer their workers this benefit, but all in all the U.S. looks pretty bad. (So much for family values!)

Content-marketing agency Column Five recently created an infographic, “U.S. Gets Failing Grade on Paid Parental Leave,” for analytics-driven recruiting software company Jobvite. The infographic shows how poorly the U.S. ranks in the area of paid family leave in comparison to other developed countries.

So few U.S. employers offer Paid Family Leave (PFL) benefits because they believe it costs too much. But they’re likely mistaken.

Since 2004, California has offered new parents PFL. How has it affected the workplace? In recent employer assessments, the requirement was found to have either “no noticeable effect” or even a “positive effect” in significant areas. It looks like improvements in productivity, performance, turnover and morale may make up for the cost of offering PFL.

Will Millennials Pave the Way for New Parents in the US?

The founder and chief executive of Facebook, Mark Zuckerberg, appears in the news fairly often. Last November, he made the headlines for leading by example in a different area — taking advantage of his own company’s parental leave policy (or at least half of it). Facebook provides up to four months of “paid baby leave” to its full time employees, regardless of gender.

Ellen Bravo, the executive director of Family Values @ Work says the following about Mark Zuckerberg’s leave in her recent article for CNBC.com:

“To make sure all fathers, and all those needing leave, are able to take the kind of time that Zuckerberg is, we need a national paid leave fund — something that pools small contributions to allow workers to draw a significant portion of wages … But until we have that, we must look to high-profile leaders like Zuckerberg to lead by example.”

Two huge shifts — one economic and one cultural — have occurred in the U.S. over the past few decades. Close to 60 percent of women work today, up from 22 percent in 1960. Moreover, more and more men want to participate in their children’s lives starting at birth.

That said, the federal government and most U.S. workplaces have failed to keep up.

Check out this infographic for more information on PFL and how it can benefit workers.