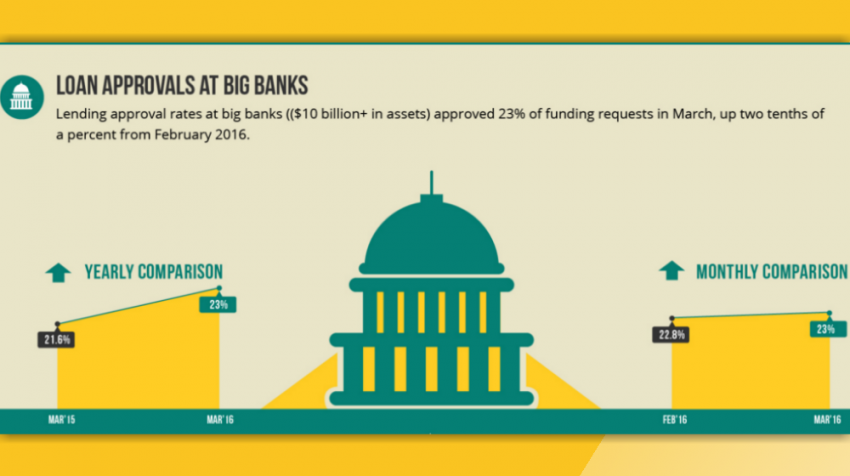 Big banks have long been accused of turning a blind eye to small businesses’ credit needs, but things are changing for the better now.

Some of the top findings of the monthly study include the following:

Enterprises looking to get approved for a small business loan can now expect a better response from big banks and institutional lenders.

It’s worth noting that big banks and institutional lenders have been increasing the percentage of their overall loans to small businesses for a while now.

Small business loan approval rates at small banks and credit unions, on the other hand, continued to decline.

“Credit unions continue to slip as players in small business lending,” Arora explains, “This downward trend have gone on for quite a while. They simply cannot compete for quality, credit-worthy borrowers.”

Arora however expects the situation to change. “Small banks are frequently pushing SBA loans, which mitigate their risk, but require a lot of documentation. After companies make their 2015 tax filings, look for small banks’ loan approval percentages to go up.”

As an enterprise owner, if you are wondering how you can be approved for a small business loan, you should understand what the lenders are looking for.

For its monthly index, Biz2Credit analyzed loan requests ranging from $25,000 to $3 million from companies in business more than two years with an average credit score above 680. Unlike other surveys, the results are based on primary data submitted by more than 1,000 small business owners who applied for funding on Biz2Credit’s online lending platform, which connects business borrowers and lenders.