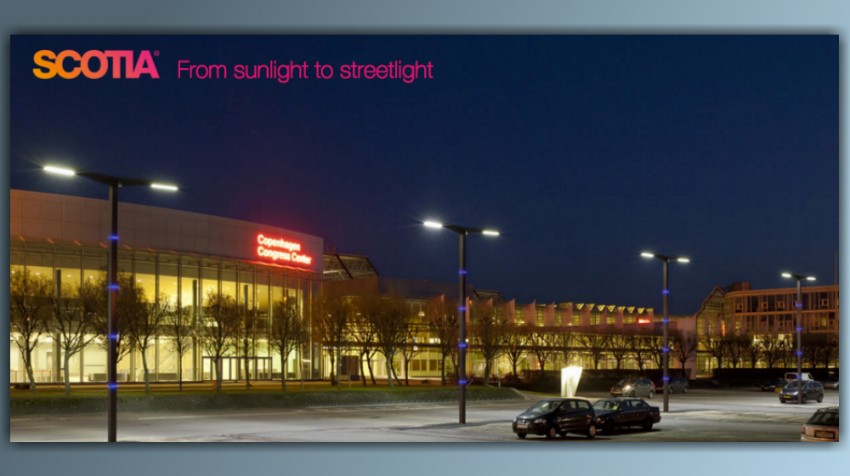 Great innovations don’t always come from big business. A new zero-emission solar-powered streetlight called the “Monopole,” which turns sunlight into streetlight, eliminating electricity costs and feeding energy back into the grid, has been launched by Scotia, a small firm founded in 2009, in Copenhagen, Denmark.

The Monopole, which was unveiled at the Light + Building trade fair in Frankfurt, Germany earlier this year, converts sunlight to streetlight by using PV (solar) panels attached to the four sides of a post. The energy can then be stored in a battery and used during the night. 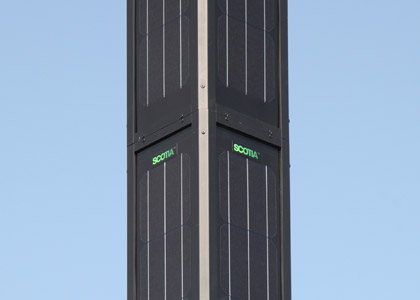 Developed by British lighting expert Steven Scott, the Monopole not only runs without electricity but can also feed excess energy back into the grid, potentially turning local authorities into energy and income generating powerhouses.

“We’re very excited to unveil our new Monopoles, which turn sunlight into streetlight,” Scott said in a recent statement. “Instead of being a drain on national grids and a huge expense for local authorities, Monopoles turn streetlights into mini power stations. They’ve already proved to be hugely successful in our pilots in Copenhagen, Abu Dhabi and Riyadh, and we anticipate demand will be high from around the world.”

Monopoles can also run off the power grid and be connected to other Monopoles, to provide a micro-power grid for developed and developing countries. Earlier versions of the streetlights have already been successfully installed in Denmark, Nigeria, UAE and Saudi Arabia, and can even power through the year using just ambient light.

There are three versions of the solar-powered streetlight design:

Due to its modular configuration, a small Monopole can be erected by just two men, without the need for machinery, in under five minutes.

The technology was developed to respond to two key energy challenges of the future:

Regarding the first challenge, in a video describing the Monopole technology, Scott said, “A huge proportion of the planet’s population still live without access to power and light. … Those without light lack the basic ingredient for economic growth. … By creating micro grids for towns, villages and cities, a new energy independence can be traded for those regions without infrastructure and light.”

The company installed a Monopole solar-powered streetlight in the Nigerian capital of Abuja as part of a pilot project for the development of microgrids built around Scotia’s systems — an initiative that will pave the way for the large-scale introduction of micro-grid technology in the region.

According to Scott, another pilot is planned for the province of Lagos. Both of these systems are seen as viable solutions to the long term energy problems of the region.

Developing countries, like Nigeria, are not the only places where Monopoles are being used. The technology has been implemented in developed countries as well.

More than 240 Monopole masts for street lights were installed in a housing project in Abu Dhabi, UAE, in 2014, and have been in continuous operation for two years without a single failure. In another project, Scotia delivered 136 masts for a roadway in Riyadh, the capital of the Kingdom of Saudi Arabia.

Regarding Scotia’s future development, Scott said, “We’ve already spoken to several local councils across the U.K., who are keen to pilot the Monopoles and are now receiving inquiries from around the world. This could effectively turn these authorities into energy powerhouses and create a larger buffer for the National Grid. It could even empower local authorities to establish their own microgrids to make areas self-sufficient.”

To learn more about Scotia and its innovative technology, visit the Scotia website.