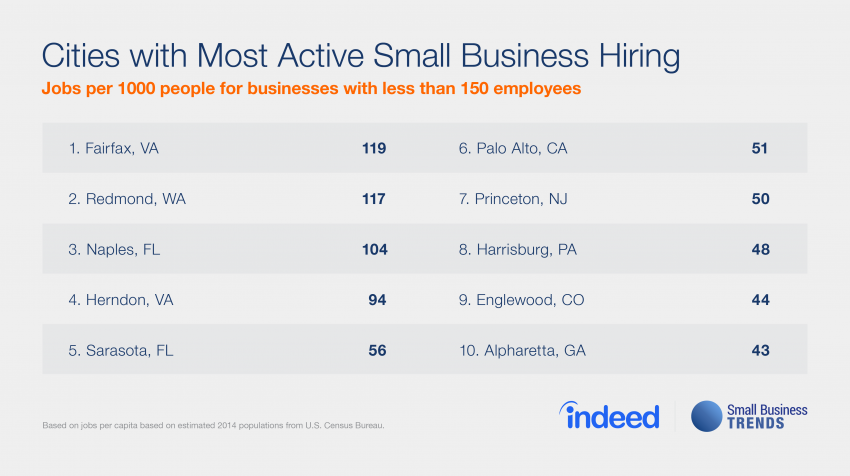 Think most of the growing small businesses are in the country’s biggest cities?

Not when it comes to hiring new staff.

If you want to find the cities with the most active and strong small business hiring per capita, look near but not in the nation’s biggest cities. In other words, look to the suburbs.  Or look to smaller cities.  And especially look to cities that encircle technology hubs or government hubs.

That’s according to an analysis from Indeed.com.

Indeed charted the top ten cities with the most small business hiring as calculated by jobs per 1,000 people.  Among the top locations was not a single huge city.

Redmond, Washington, the home of Microsoft and a suburb of the thriving tech city of Seattle, ranked second.

Two Florida cities, Naples and Sarasota, finished third and fifth, respectively.  Southwest Florida has seen a booming housing market with demand driven from retirees.  As a result, hiring in construction trades, which frequently are small businesses, is in growth mode.

Suburbs near Denver and Atlanta also made the list.

“It makes a lot of sense for small businesses to be growing near major metros,” said Tara Sinclair, Chief Economist at Indeed. “They have similar access to talent and amenities with a lower-cost of living.”

Silicon Valley is the storied home to tech startups, but only Palo Alto (at number six on the list) made the top ten.

Princeton, New Jersey, along with Harrisburg, Pennsylvania, also made the list.

How to Use This Small Business Hiring Data

What should you make of this data?

First, if you’re considering moving your business to Silicon Valley or a big city, you may want to rethink that plan.  The costs of doing business in smaller communities is lower.

At the same time, if you have a choice of where to locate your business, consider locating NEAR but not in a large city.  You’ll get access to a large talent pool if jobs are within commuting distance of a big city. And you and your employees will have access to big city amenities without the big city price tag.

Of course, there are numerous other benefits to doing business in a smaller city. Typically, these areas have lower crime rates and lower housing costs. Transportation is less congested making your business easier for customers to get to.

Indeed’s analysis looked at small businesses with fewer than 150 employees.  The information is based on the number of small business jobs per 1,000 people, based on 2014 U.S. Census population data.

Chart provided by Indeed which also contributed analysis to this report.