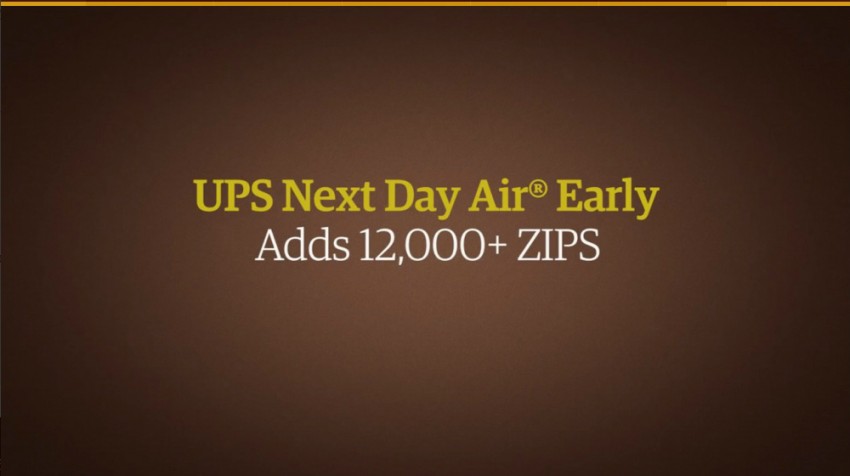 Accountants, healthcare firms and small manufacturers are all expected to benefit from the arrival of UPS Next Day Air Early — which will create an earlier guaranteed-delivery option for customers in locations that had previously only enjoyed end-of-day guarantees.

After expanding its reach to another 12,680 Zip Codes in March, the UPS Next Day Air Early service now reaches 94 percent of ZIP codes and 98 percent of businesses in the United States.

Although UPS already serves more Zip Codes by 8 a.m. than any of its competitors, according to the company, the vast majority of Zip Codes that have been included in the second phase of the Next Day Air Early rollout are primarily located in extended areas. That means UPS customers in these formerly out-of-reach areas will now receive their packages by noon or 2 p.m.

A Saturday service is also available for certain destinations.

In Canada, the service has been renamed UPS Express Early.

According to Alan Gershenhorn, chief commercial officer and executive vice president of UPS, the massive rebranding came as a direct response to customer demands for more “urgent and reliable deliveries”.

“Already we’ve seen manufacturers, healthcare companies and professional services, such as financial firms, respond to the expansion,” said Gershenhorn in  a release on the company’s official website. “Getting a package by noon or 2 p.m. has proven to be attractive. For example, businesses use those additional hours to process documents faster, or to turn inventory or lab specimens around quicker.”

Gershenhorn also added that the UPS Next Day Air Early would be particularly useful for small businesses that needed to process information quickly in order to remain competitive within their respective industries.

“Healthcare laboratories, for example, want to receive specimens quickly to process patients’ test results faster,” he said. “Small business and professional service providers, such as accountants, compete on service.  Those are just a few examples. We also see consumers who need early deliveries, such as the home health patient who needs something quickly.”