Donald Trump on Small Business Issues (In His Own Words) 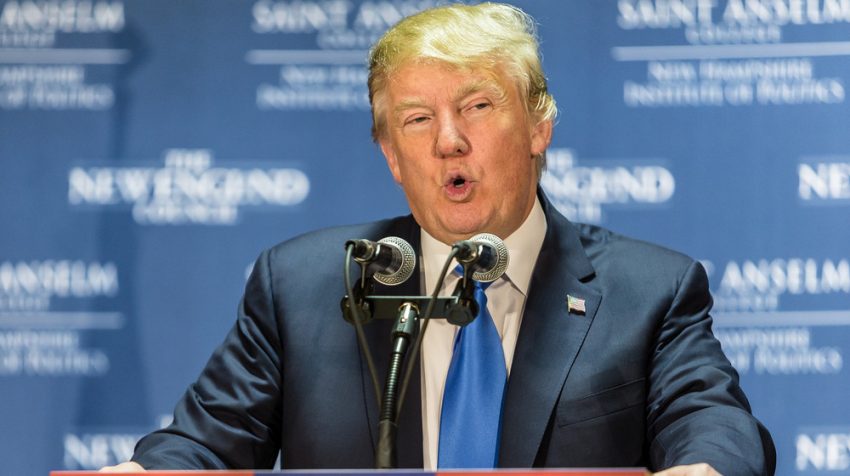 Businessman and presidential hopeful Donald Trump has talked a lot about business over the years but not that much about small business. Yet small business owners seem to be favoring him as the candidate who best represents their interests.

A Manta poll of 2,527 small business owners who plan to vote in the primaries found that 60 percent think Trump is the best Republican candidate for small business.

“Entrepreneurs relate to Donald Trump because, like him, we write our own narrative. We turn conflict into opportunity,” said Cherie Corso, owner of G2 Organics, in Manta’s report of its findings.

From these surveys, it’s clear that small business is casting its vote for Trump, but what are the candidate’s views on issues of concern to small business and entrepreneurs? Here is what he has to say, in his own words. Some of what he says come from position statements on his website and some from other sources.

It should be noted that Small Business Trends reached out to Mr. Trump’s campaign but did not receive a response.

Though Trump’s statements on business are general applying to very large and very small companies — and all businesses in between, in a Position Statement on Tax Reform he explains:

“No business of any size, from a Fortune 500 to a mom-and-pop shop to a freelancer living job to job, will pay more than 15 percent of their business income in taxes. This lower rate makes corporate inversions unnecessary by making America’s tax rate one of the best in the world.”

“This lower tax rate cannot be for big business alone; it needs to help the small businesses that are the true engine of our economy. Right now, freelancers, sole proprietors, unincorporated small businesses and pass-through entities are taxed at the high personal income tax rates.

“This treatment stifles small businesses. It also stifles tax reform because efforts to reduce loopholes and deductions available to the very rich and special interests end up hitting small businesses and job creators as well.

“The Trump plan addresses this challenge head on with a new business income tax rate within the personal income tax code that matches the 15 percent corporate tax rate to help these businesses, entrepreneurs and freelancers grow and prosper.”

On the topic of healthcare, particularly the Patient Protection and Affordable Care Act, also known as Obamacare, Trump’s attitude also seems in sync with many small business owners. He tweets:

We will immediately repeal and replace ObamaCare – and nobody can do that like me. We will save $’s and have much better healthcare!

“On day one of the Trump Administration, we will ask Congress to immediately deliver a full repeal of Obamacare,” Trump explains in a position statement on healthcare.

“We will work with Congress to make sure we have a series of reforms ready for implementation that follow free market principles and that will restore economic freedom and certainty to everyone in this country.”

“I would end Obamacare and replace it with something terrific, for far less money for the country and for the people,” Trump told KCCI.com.

In the area of government regulation too, Trump seems to be in agreement with many small business owners that fewer regulations are better. Though again not speaking directly about small businesses, Trump explains in a quote carried by the Washington Times.

“Right now, government regulations cost us annually $1.75 trillion. They constitute a stealth tax that is larger than the amount the Internal Revenue Service collects every year from corporations and individuals combined. In just three years, Mr. Obama has added hugely to the annual regulatory bill.”

In a support document for the so-called Regulations from the Executive in Need of Scrutiny (REINS) Act, Trump is quoted as saying:

“I will sign the REINS Act should it reach my desk as President and more importantly I will work hard to get it passed. The monstrosity that is the Federal Government with its pages and pages of rules and regulations has been a disaster for the American economy and job growth. The REINS Act is one major step toward getting our government under control.”

When it comes to trade with China, small business owners are sometimes divided. While some small businesses are hurtg by overseas cmpetition others benefit from lower costs and outsourcing. So it becomes hard to sort out how Trump’s vision of a new trade relationship with China will impact small businesses in general. In a position statement on trade reform, Trump will only say:

“If you give American workers a level playing field, they will win. At its heart, this plan is a negotiating strategy to bring fairness to our trade with China. The results will be huge for American businesses and workers. Jobs and factories will stop moving offshore and instead stay here at home. The economy will boom. The steps outlined in this plan will make that a reality.

“When Donald J. Trump is president, China will be on notice that America is back in the global leadership business and that their days of currency manipulation and cheating are over. We will cut a better deal with China that helps American businesses and workers compete.”

A nation WITHOUT BORDERS is not a nation at all. We must have a wall. The rule of law matters. Jeb daf.  — Donald J. Trump (@realDonaldTrump) July 28, 2015

While the tweet above may sound great, immigration is an area where some small business owners may differ with Trump. Like tech startups, some smal businesses are beginning to count on a global talent pool from which to recruit, especially for freelancers. So it’s unclear how Trump’s policies might affect them. In a position statement on immigration, Trump says:

“When politicians talk about ‘immigration reform’ they mean amnesty, cheap labor and open borders. The Schumer-Rubio immigration bill was nothing more than a giveaway to the corporate patrons who run both parties.

“In the year 2015, with 92 million Americans outside the workforce and incomes collapsing, we need companies to hire from the domestic pool of unemployed. Petitions for workers should be mailed to the unemployment office, not USCIS.”

In a talking points memo, he adds:

“I will end forever the use of the H-1B as a cheap labor program, and institute an absolute requirement to hire American workers first for every visa and immigration program. No exceptions.”

For more on where Donald Trump stands on small business issues and policies regarding small business, we recommend that you visit the Small Business & Entrepreneurship Council website.