Bernie Sanders on Small Business Issues (In His Own Words) 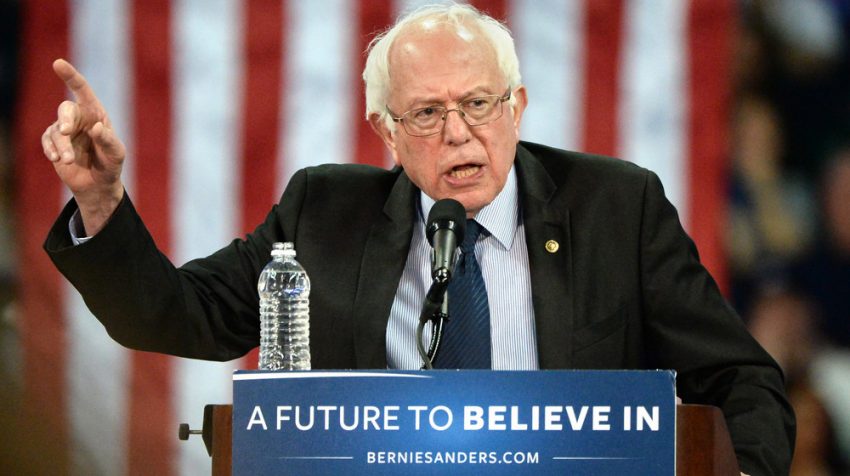 Bernie Sanders may be to Hillary Clinton what Exaggerator was to Nyquist in the Kentucky Derby, but he remains a dogged contender for the presidential nomination despite the delegate count.

For that reason, Small Business Trends felt it would be appropriate to share what Sanders has to say about small business issues, in his words, in the unlikely event he gets elected.

According to his campaign website, Sanders has worked hard to promote policies that help small businesses, encourage entrepreneurship and foster innovation.

Sanders has built his small business platform on four planks:

“The backbone of a healthy economy is made up of small businesses on the ‘Main Streets’ of America, not giant corporations on Wall Street,” Sanders said on the website.

Much of what he means by “support” for small business comes in the form of access to capital. Sanders wants to make sure that small businesses can get low-interest loans.

“Small businesses take out loans so that they can improve and grow their businesses,” he said. “Low interest rates on these loans can help businesses pay them back quickly while maintaining good cash flow, expanding the overall domestic economy, and creating more jobs.”

“When Glass-Steagall [the Banking Act passed in 1933], was eliminated under President Bill Clinton, the wall of separation between commercial banking and investment banking was removed. Local banks increasingly began to invest in risky Wall Street trading and speculation and became less inclined to make low-interest loans to small businesses. This resulted in the 2008 financial crisis.”

Sanders voted for the Small Business Jobs Act in 2010, which gave low-interest loans to small businesses and supported the small community banks through which the loans were distributed. The legislation also offered $12 billion in small business tax relief during the height of the recent economic crisis in 2010 and an additional $30 billion in capital for small businesses.

In a prepared statement commenting on the bill’s passage, Sanders said: “In the midst of the very difficult recession that we’re in, helping small businesses receive affordable credit is imperative. Small business creates most of the new jobs in this country, and it’s important that we do everything we can to help them.”

Sanders is bearish on Wall Street due to what he calls its excessive “greed and power” and rolled out a six-point plan to rein it in.

“During the financial crisis, the Federal Reserve provided hundreds of billions of dollars to foreign banks and corporations including the Arab Banking Corporation, Toyota, Mitsubishi, the Korea Development Bank, and the state-owned Bank of Bavaria,” Sanders said. “At a time when small businesses can’t get the lending they need, it is time for the Fed to create millions of American jobs by providing low-interest loans directly to small businesses.

Sanders supports increasing access to education and training for “future” entrepreneurs and opposes what he calls intellectual property “regimes.” He also feels the current patent system is in need of reform.

“From overly-broad patents to companies that do nothing but collect patents for litigation purposes to drawn-out legal battles to overly-lengthy terms, the patent system is plagued with problems that negatively impact businesses,” Sanders said.

Sanders views defending the openness and neutrality of the Internet as vital to supporting small businesses. Without net neutrality policies, he believes small businesses could be subject to increased costs to supply content to consumers and also suffer unfair competitive disadvantages from larger companies who can afford to pay for special treatment from Internet Service Providers.

“What net neutrality means is that everyone has the same access to the same information,” Sanders said in an address to the Senate in 2014. “Whether you are a mom and pop store in Hardwick, Vermont or Walmart, the largest private corporation in America, you should have the same access to your customers.”

“If the FCC allows huge corporations to negotiate ‘fast lane deals,’ then the Internet will be sold to highest bidder,” he added. “Companies with money will have access and small businesses will be treated as second- or third-class citizens. The will be a disaster for our economy and small businesses across our country.

In a position statement citing his immigrant heritage, Sanders said, “We are a nation of immigrants … But even as this tradition is carried on proudly by so many families all across the United States, we have eleven million people in this country who are undocumented … and are systematically shut out from that same opportunity.”

According to his website, Sanders believes the United States must create an immigration system that invites greater innovation, diversity and economic opportunity for both American-born citizens and the people who want to make this land their home.

Sanders also supports visa policies that are fair to small business owners. He feels that small businesses reap none of the benefits gained from hiring foreign workers but are left to deal with the competitive advantage current laws give to major corporations.

Bernie Sanders On Small Business and Other Issues

Sanders support a minimum wage hike to $15 per hour, according to his website.

“Millions of Americans are working for totally inadequate wages,” he said. “We must ensure that no full-time worker lives in poverty. The current federal minimum wage is starvation pay and must become a living wage. We must increase it to $15 an hour over the next several years.”

He also supports equal pay for women, saying that it is “unconscionable that women earn less than men for performing the same work.”

Sanders also advocates for overtime pay protection and for strengthening of the labor movement through the Employee Free Choice Act, which would make it easier for workers to organize and bargain collectively.

For Sanders, job creation is completely tied to the need for infrastructure improvement, and, on his website, makes the case for a massive government-sponsored jobs program, the Rebuild America Act, a five-year plan that would invest $1 trillion and create or maintain at least 13 million jobs, which he introduced in 2015:

For most of our history, the U.S. proudly led the world in building infrastructure that grew our economy, gave our businesses a competitive advantage and provided our workers a decent standard of living. Sadly, that is no longer the case.

“Our nation’s infrastructure is collapsing, and the American people know it. Every day, they drive on roads with unforgiving potholes and over bridges that are in disrepair. They wait in traffic jams and ride in railroads and subways that are overcrowded. They see airports bursting at the seams.

“For too many years, we have dramatically underfunded the physical infrastructure that our economy depends on. That is why I have proposed the Rebuild America Act, to invest $1 trillion over five years to modernize our infrastructure. It would be paid for by closing loopholes that allow profitable corporations to avoid paying taxes by, among other things, shifting their profits to the Cayman Islands and other offshore tax havens.”

If elected, Sanders plans to raise the corporate tax rate — the highest in the developed world — close loopholes in the current system and ensure the wealthiest in the country (the one percent) pay more in taxes. His plan also supports a marginal personal income tax rate above 50 percent. The current top rate is 39.6 percent.

“We’re working right now on a comprehensive tax package, which I suspect will, for the top marginal rates, go over 50 percent,” Sanders said on PBS’s ‘Charlie Rose’ program as reported by The Hill.

“It is time to redistribute money back to the working families of this country from the top one-tenth of 1 percent, and tax policy is one of the ways we do that,” Sanders told Bloomberg’s Al Hunt on the show.

By Sanders’ admission, the plan would raise taxes by $1.8 trillion over a decade, including higher taxes on financial institutions and domestic energy producers, a carbon tax, and a doubling of the top tax rate on capital gains and dividends, as reported the Small Business & Entrepreneurship Council.

Equal access to healthcare is one of Sanders greatest concerns. He believes that the government should address the challenges facing the American healthcare system immediately and sees healthcare as a human right that should be guaranteed to all Americans.

“Health care must be recognized as a right, not a privilege,” Sanders said. “Every man, woman and child in our country should be able to access the health care they need regardless of their income. The only long-term solution to America’s healthcare crisis is a single-payer national health care program.”

Sanders voted for the Affordable Care Act but believes that the measure hasn’t gone far enough to provide adequate healthcare for all.

“Obamacare was a small victory for the uninsured, but it is time to take the fight against inadequate coverage even further,” he said.

Sanders is a strong proponent of a single-payer, comprehensive universal healthcare system that includes Medicaid and Medicare expansion (“Medicare for All” is his term for the proposed increase).

“Many countries have proven that a single-payer system can work — it’s time for the U.S. to join that list,” Sanders said.

Visit Sanders’ campaign website, to learn more about his positions on issues of concern to small business. The Small Business & Entrepreneurship Council website also has a snapshot of the candidate’s views.