Written by leaders who led the Navy SEALS, Extreme Ownership: How U.S. Navy SEALs Lead and Win" is a guide for leaders who want to lead high-functioning teams, just like the Navy SEALS for every business mission that your business will ever undertake. 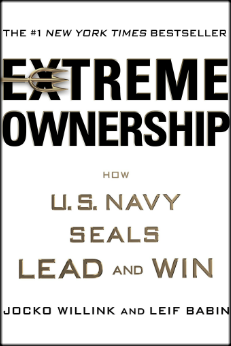 Extreme Ownership: How U.S. Navy SEALs Lead and Win was written by two Navy SEALS, but not just  any two Navy SEALS. Authors Leif Babin and Jocko Willink were responsible for leading Navy SEALS through truly life-threatening and seemingly hopeless conditions in Iraq. Their book, building on those war experiences, helps leaders confront the internal and external “battles” that come with leadership.

What is Extreme Ownership About

Extreme Ownership is based on a simple, unwritten rule about leadership: Leaders are responsible for everything that goes on in a business, operation or mission. This may sound easy to understand, but actually really hard to deal with in reality.

Willink came to this startling realization under one of the most disastrous and potentially career-ending moments in his life, “blue on blue”, or attack from within your camp by a member of your camp. When executive leadership came in to investigate (and find someone to blame), Jocko had one decision to make: blame himself or blame the team.

Jocko took all of the blame for the mishap himself. In the meeting to defend his career, Jocko didn’t try to sweep anything under the rug. He simply outlined what was planned and what did happen.

Then he took responsibility for the whole thing.

That decision actually saved Willink’s career because the Army leadership was impressed that a leader in his situation would so openly take ownership of the “error”.

This realization led Willink to embrace the philosophy of “extreme ownership”, a concept he would later embrace in his executive coaching organization, Echelon Front.

Willink and Babin urge leaders to embrace everything that happens in their organization. For leaders, this means:

What should emerge, if “extreme ownership” is fully embraced, is a team of highly-aligned individuals who know their mission and have the investment to see it through.

Leif Babin is a retired Navy Seal officer, speaker, and co-owner of Echelon Front. He served in the Navy SEALS for nine years, including work as a platoon commander in the most decorated Special Forces Unit in the Iraq War.

Jocko Willink is a retired Navy SEAL officer with over 30 years of experience. His highly decorated career includes climbing the ranks through the Navy and coordinating the Battle of Ramadi.

What Was Best About This Book

For those who are interested in the military or the proactive perspective that views business as a war between competitors, then this book is probably for you. It is filled with harrowing stories from the military and their applications in the office.

The downside to Extreme Ownership lies ironically in its strength (one-sided focus). If you are not a fan of the “business as war” perspective, then this may not be the book for you. The book’s focus is on high performance, proactive leadership, and beating the competition with a high-performing team.

If you are a staunch advocate of Extreme Ownership, the book is gift wrapped in metaphorical motivation. More specific strategies could be explicitly drawn from those metaphors to really help readers quickly apply the insights from the metaphors.

Extreme Ownership is a powerful book not only because of the authors’experiences but also because of the straightforward (and simple) approach to leadership it advocates. Many leadership books approach all of the separate components of leadership. Extreme Ownership takes that concept and makes it simple with one message: “Own your team’s greatness” and remove any obstacles that get in the way. Using metaphors drawn from military experience, the book zeroes in on the simple ways that leaders keep their high-performing teams from reaching the highest levels.