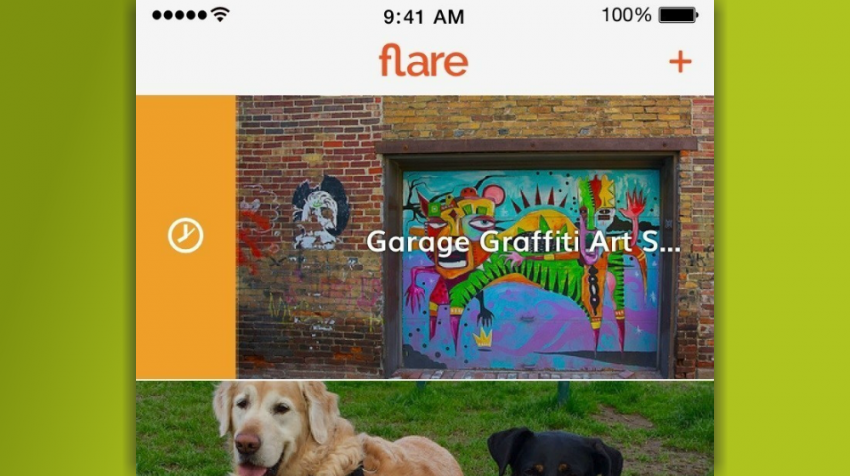 “Flare empowers people to share ideas and get guidance from friends, fellow entrepreneurs, and experts in a fun and collaborative way, providing an immediate resource to receive feedback and drive new concepts or ideas forward,” the announcement says.

In explaining the reason for Flare’s development, GoDaddy cites its own recent survey, in which 67 percent of respondents reported having conceived a business idea, but only 15 percent pursued it.

“Everyone has ideas, but too often they don’t go anywhere,” said Rene Reinsberg, vice president of Emerging Products at GoDaddy in the announcement. “We created Flare because we recognized the need for a community where people can get impartial feedback on ideas and connect with others to help them turn those ideas into something meaningful.”

Reinsberg encouraged people to post an idea to the GoDaddy Flare app, whether it’s something that just popped into their head or that they’ve been thinking about for a long time.

“Whether you’ve just had a fleeting thought and want to explore where you might be able to take it, or you’ve been dreaming of creating your own business your whole life, Flare is the first place to go for someone that wants to take the next step,” she said.

The GoDaddy Flare app functions in much the same manner as a social network in that entrepreneurs can connect with fellow entrepreneurs, potential consumers, investors and experts, to create a community around their ideas.

Once members post their ideas, they can share them on social networks or via email or text, to get more people involved in giving feedback. Ideas also appear in a feed stream so members of the Flare community can see and rate them. Members can also “love” an idea, to follow its progress.

People whose ideas become popular — that receive enough favorable ratings — can solicit even more feedback to help them decide whether or not to take the idea further.

Another way members can participate in the community is by becoming “advisors,” which gives them the opportunity to share their knowledge regarding a given area with others seeking advice.

“By supporting a concept, advisors can play an active role during its developmental journey,” the announcement said. “Followers can also pledge to be a future customer, providing a valuable signal to the entrepreneur about demand and marketability of his or her new product or service.”

The GoDaddy Flare app isn’t the only product not directly related to domain registration and hosting in which GoDaddy has invested. Recently, the company announced the pending acquisition of cloud-based VoIP phone service FreedomVoice, as well.

Flare is free to use, and members are not required to have a GoDaddy account to participate.

The GoDaddy Flare app is currently available for iOS. GoDaddy plans to launch an Android version in June.