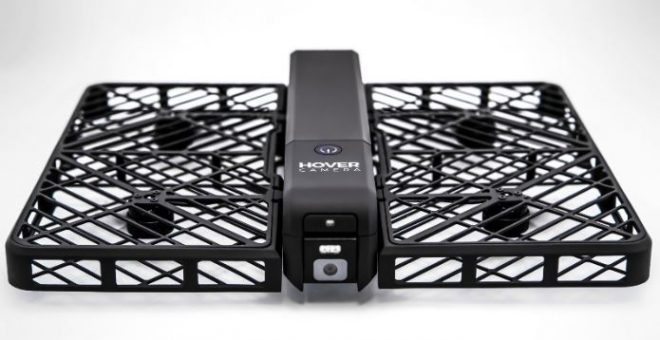 The selfie has invaded virtually every aspect of popular culture. Social media, art galleries and mainstream news networks are completely and utterly littered with them. Yet very few of those images come even within striking distance of perfection.

Beijing-based startup Zero Zero Robotics is on a mission to change that with Hover Camera. This revolutionary quadcopter isn’t even on the market yet, and it’s already redefined the way consumers interact with drones.

Hover Camera certainly doesn’t look like a camera. At roughly the size of an old VHS tape, the sleek device features four powerful propellers encased within an intricate carbon fibre skeleton. At just under 250 grams, it’s extremely lightweight, totally portable and features a 13-megapixel camera in order to capture exactly what it’s told from the air.

Yet Hover Camera’s real unique selling proposition isn’t what it’s doing — but how.

Rather than relying upon a controller or special wristband like other image-capturing drones, Hover Camera draws upon advanced, proprietary AI software that enables it to independently track and follow certain bodies and faces.

Using Hover Camera’s accompanying Android or iOS app, you’re able to tell the device who it should find and capture on camera by simply tapping that person’s photo. Hover Camera then utilizes state-of-the-art optical and sonar sensors in order to position itself, remain steady and figure out who or what it should be following.

That being said, users don’t necessarily need to leave everything to AI. The app can also be used to re-position the drone via onscreen swipes — carrying Hover Camera up to 164 feet into the air. Users will then have the option of shooting 4K panorama video. Video and image files are automatically transferred from mid-air onto the app to enable immediate social sharing.

In order to carry out all of these relatively complicated actions, Hover Camera packs a lot of punch where hardware is concerned. It’s been fitted with the same Qualcomm Snapdragon 801 processor found in the HTC One M8 and Samsung Galaxy S5, and relies upon propriety computer vision and AI software to help it get the job done.

According to start-up cofounder and CEO Meng Qiu Wang, Hover Camera should eventually be available for under $600 — but the device isn’t quite ready to go onto the retail market just yet.

That being said, creators at Zero Zero Robotics are working to send out some 200 protoypes to beta testers who have opted to re-order Hover Camera later this year. Users can register their interest to become a beta tester on the company’s website.