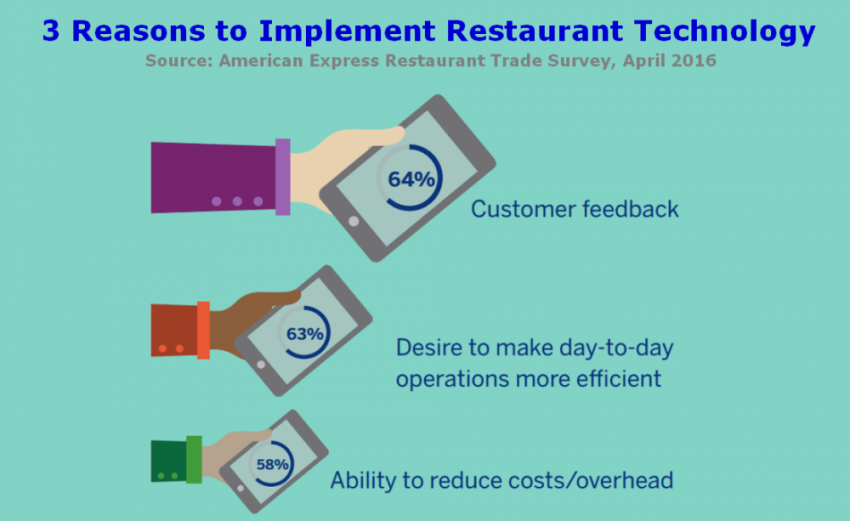 The typical consumer might think that restaurant success is all about the amazing and mouth watering food.

But increasingly, owners and decision makers in restaurants are looking to restaurant technology as part of the success recipe.

Why Implement Technology in Restaurants?

What Restaurant Technology is Hot?

Assuming the reasons to implement restaurant technology are compelling, the next question becomes:  which technologies should you implement?

In the same survey, restaurant operators predicted four restaurant technology trends would be the hottest in the coming 12 months.

Once again, we see customers are at the center of things — as they should be!  The top four technologies are all about customer convenience and service:

The information in this survey was collected in April 2016 as part of The American Express Restaurant Trade Survey.  In a prepared statement, Gunther Bright, Executive Vice President of Merchant Services-U.S., American Express, said, “American Express has been an advocate of the restaurant industry for over 30 years, providing merchants with insights and resources to help them scale their businesses. Restaurant operators see growing their businesses and making their restaurants more innovative as the two most important priorities, according to our survey, and the American Express Restaurant Trade Program creates an environment that fuels culinary inspiration and ideas to help drive the future of the industry.”

The survey was conducted using a random sample of 503 U.S. restaurant operators (i.e., owners or managers charged with making day-to-day financial decisions for independently-owned restaurants).  Percentages may total more than 100 percent because multiple answers were permitted.