What You Need to Know About Google’s Expanded Text Ads 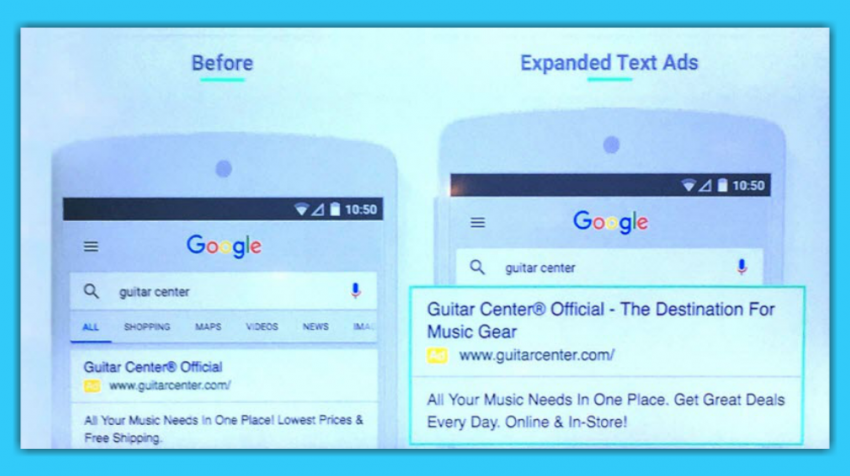 Expanded Text Ads are coming to Google AdWords. Are you excited? But more importantly, are you ready?

Expanded Text Ads were one of several huge AdWords changes Google announced Tuesday — if not the biggest. I still can’t believe that Google will soon actually increase its ad text limits by 2x!

So what exactly is changing? Here are 10 things advertisers need to know about Expanded Text Ads.

1. What Are Expanded Text Ads?

Expanded Text Ads are 2x bigger than current text ads. The new ads are designed to maximize your presence and performance on mobile search results with a bigger headline and an extra long description. (And with a mobile-first mindset, whatever works on mobile is going to get applied to desktop too.)

Expanded Text ads will show across all devices — desktop and mobile — and will wrap automatically based on device size.

2. Why Is Google Making This Change?

Google is calling this the biggest change to text ads since AdWords launched 15 years ago.

Several months ago, Google began thinking about what an AdWords ad would look like if they created AdWords in today’s mobile-first world, where more than half of the trillions of searches conducted on Google per year are done via a mobile device.

Google’s first move toward creating a unified experience across devices came in February when they killed off right side ads on desktop. Now with the constraints of desktop right-side ads gone, this change seems like a natural progression from the super-sized headlines introduced in 2011.

3. How Much Bigger Are These Expanded Ads?

You now have a total of 140 characters of ad copy space to use, marking the end of the current 25-35-35 limits. No comment from Twitter as yet about their thoughts on Google adopting a 140-character limit. Here’s a little more info on the changes from the AdWords blog: 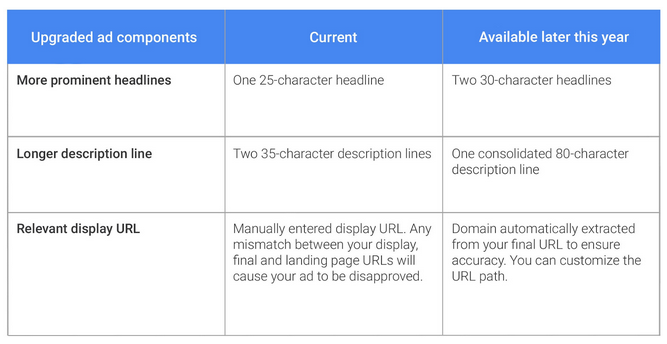 So make all those extra characters count. Create eye-catching and emotional ads that searchers can’t resist clicking on.

4. What Do The New Expanded Text Ads Look Like?

Here’s a before and after of what the ads will look like on mobile and desktop:

And here’s what Expanded Text Ads will look like in the AdWords interface: 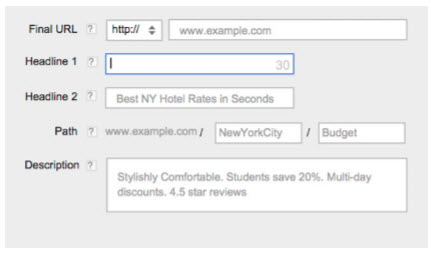 5. How Much Are Headlines Expanding?

Advertisers currently are limited to a 25-character headline.

That’s means our headlines will soon increase by 140 percent!

6. How Much Will Descriptions Expand?

Advertisers will have one 80-character description line.

That means descriptions will increase by 14 percent.

AdWords will automatically extract the domain from the final URL.

Advertisers can then add up to two paths to enhance the display URL (using up to 15 characters).

8. Will This Improve CTR?

At WordStream, we’ve observed CTR increase by around 12 percent by adding ad or call extensions to mobile text ads — so we expect increasing the character counts of headlines and description should result in more clicks.

Regardless, you can bet we’ll be closely tracking the performance of this new ad format as it becomes more widely available.

Google hasn’t officially revealed when all advertisers will have access to Expanded Text Ads. Keep an eye out and we’ll update when we know more details.

10. What Should You Do To Prepare for Expanded Text Ads?

Raise your Quality Scores now! Quality Score is already the most important metric in your AdWords account, but it’s about to become even more important.

Businesses that occupy the top spots will take up the most valuable SERP real estate – especially for commercial queries. It could make anything below position 2 or 3 on mobile devices irrelevant!

Here is some helpful reading on Quality Score: Hacking AdWords: Winning at AdWords the Weird Way.

Additionally, you’ve got a lot of ad text optimization ahead of you. You’ll need to make sure your text ads are all rewritten to take advantage of this new format. Google is giving you 2x more space with Expanded Text Ads – so be ready to use it to your advantage!