How Much Do Small Businesses Spend on Facebook Marketing? Not That Much 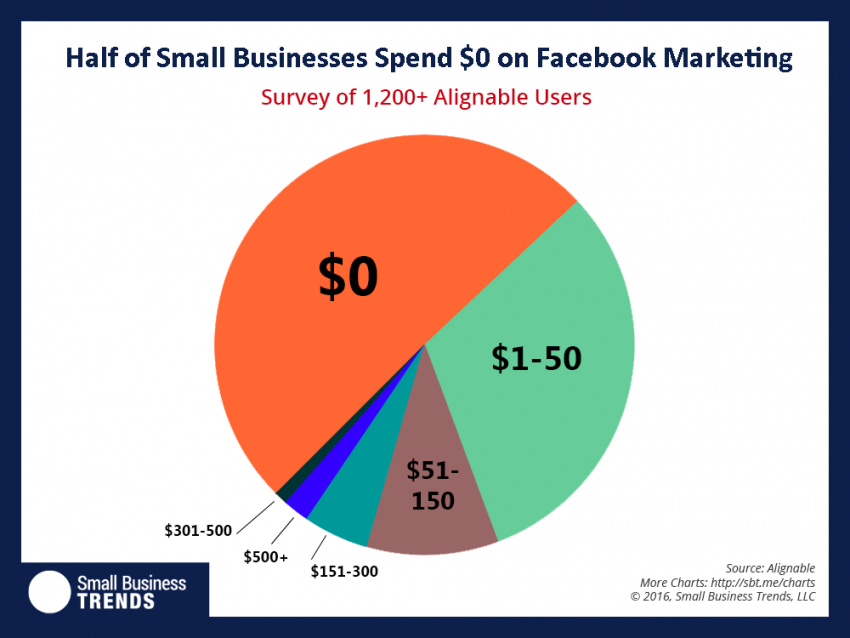 Millions of small businesses are using Facebook but only half are spending any marketing dollars there.

New data from Alignable shows that half of the small businesses it surveyed — among more than 1,200 of its users — spent $0 last quarter on their Facebook marketing efforts.

Rather than spend money, small businesses are more inclined to use Facebook’s free organic marketing tools to promote their companies and brands.

Of course, if half of the small businesses that Alignable surveyed don’t spend a dime on Facebook marketing, that means half do.

But they’re not spending too much.

Alignable small business users don’t seem too keen on using their hard earned money to advertise with other popular social platforms, for that matter. For example, 94 percent say they didn’t spend that proverbial dime on Instagram, either.

Alignable’s data pool included more than 1,200 of its small business owners. They were all located in North America and included both B2B and B2C companies. All the companies included for the company’s report employ less than 50 people. Companies were asked how much they spent on Facebook marketing tools during the first quarter of 2016, among a total of six questions.

The main reason small businesses are on Facebook is for brand or company awareness. And that’s where Alignable users said they found the best success on the social site.

The same small businesses also said they were relatively successful at generating new business and increasing user engagement on Facebook.

So, what does this information tell small businesses?

First, promoting your business on Facebook doesn’t really take much money at all. And small businesses — at least those interviewed by Alignable — seem to find Facebook’s organic reach quite sufficent.

Second, 81 percent of these small businesses spend less than $50 a quarter on Facebook marketing. So if you’re not satisfied with the results you’re getting from the free tools on the site, a small investment is all that’s required to see better results.