Boost Your Productivity by – Standing While Working? 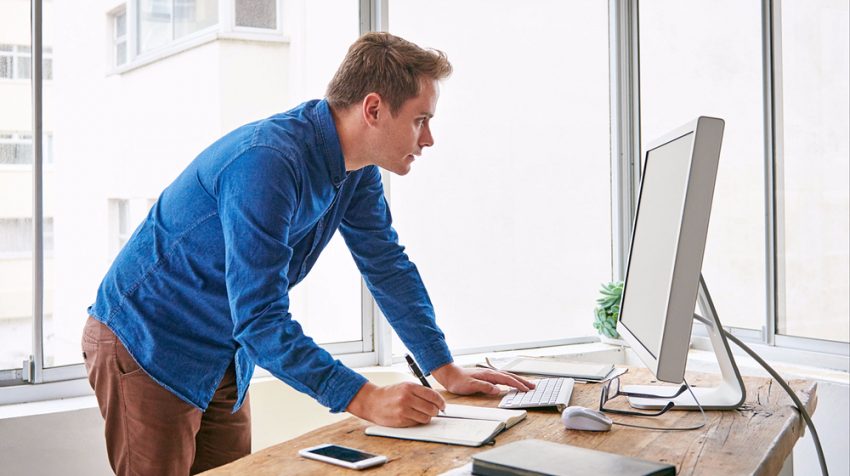 Looking to boost your productivity at work? The answer may be simpler than you think. In fact, a recent study by the Texas A&M Health Science Center School of Public Health found that simply standing at your desk can have a huge impact on productivity.

The university’s researchers studied the productivity differences between two groups of employees working at call centers. The employees who had the ability to raise or lower their desks as they pleased throughout the day were about 46 percent more productive than those employees who only had traditional seated desks.

That doesn’t mean those workers have to stand at their desks all day. The study found that those with stand capable desks sat for about 1.6 hours less per day than the workers who only had regular seated desks. So simply having the option to stand on occasion made that much of a difference.

In addition, the study found that those with the ability to stand at their desks experienced decreased body discomfort over the six-month period of the study. However, the study’s authors did not that many of the results were not immediate. But over time, they did become noticeable.

So as a business owner, what this means is that it might be time to rethink the traditional workspace. Investing in standing desks for yourself and your team may be more affordable than you think. And if over time that leads to a 46 percent increase in productivity, the initial investment could very well be worth it.

In addition, you don’t have to just go with a regular old standing desk. There are plenty of different options out there ranging from desks that allow you to lay down while you work to those that let you constantly walk in place on a giant hamster wheel.

Of course, putting together a bunch of hamster wheels for your team probably isn’t the most practical use of your time or resources. However, if you find a unique work station that could allow you or your team to get up and move around once in awhile, it could be nice to offer special workstations that they can sign up to use from time to time.

Or, you could even practice some basic exercises at your desk just to keep attention and productivity levels up throughout the day. Doing something besides sitting, whether its standing to work for awhile, walking in place or even just moving around at your desk can have a big impact on your team’s overall health and well being. And if you can make a positive impact in that area, you might also be able to improve satisfaction and productivity in the workplace.