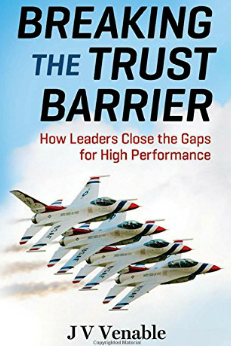 According to Breaking the Trust Barrier, the big idea behind superior teamwork is actively preventing things that can drag a team down. These things that draw a team down create gaps in your team that are harder to fix over time. The way to fill in these “gaps”, according to Col. Venable, is by building trust. Building that trust requires crossing the “trust barrier”. The “trust barrier” is the invisible line between compliance and loyalty. It is the reason that employees in the book We Are Market Basket risked their wages in favor of the CEO who they felt best embodied their values.

Colonel J.V. Venable (retired), is a real “Top Gun” (graduate of the United States Air Force’s Fighter Weapons School), a cancer survivor, and former commander of the USAF Thunderbirds, in addition to leading flight operations during the Iraq War.