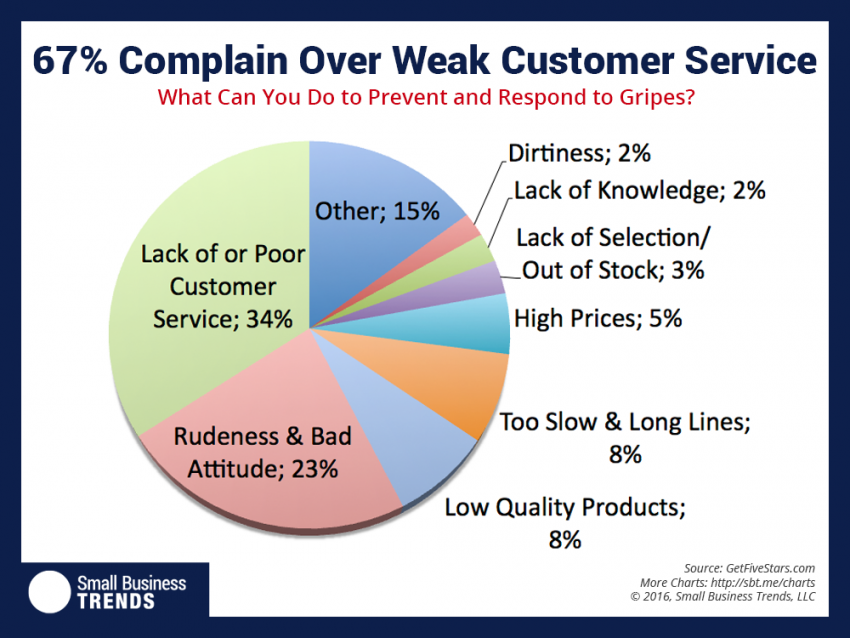 No matter how hard you try to avoid it, you’re going to hear customer complaints about your small business.

This idea is right up there with death and taxes, really. But according to GetFiveStars.com, an overwhelming majority of these complaints can be avoided. New data from the company that’s created a customer feedback platform that encourages you to seek out reviews shows that about 67 percent of all customer complaints should never really happen.

GetFiveStars asked consumers what big issue would cause them to complain about a local merchant. More than one-third (34 percent) said that a lack of or poor customer service would illicit a negative review of a company.

But there’s more to this. Another 23 percent said that rudeness and a bad attitude toward customers also draws their ire, so much so that it’s enough for them to squawk.

Even more, eight percent said that long lines in stores or service that’s too slow will cause them to grouse. And another two percent publicly bridle when they encounter employees who lack knowledge on a product.

In total, that’s 67 percent of customers who say that poor customer service — in some shape or form — directed at them will result in complaints about your business.

Half the remaining respondents had random answers to the survey, at least nothing so frequent it could be pinpointed. Meanwhile, another eight percent say that low-quality products will draw a complaint. Other big complaint inducers include high prices (five percent), a lack of selection of products (three percent), and general dirtiness about your business location (two percent), according to the GetFiveStars results.

To backtrack, it appears that most customers are ready to log a complaint about your business when they’re dealt with in a poor manner directly. Lack of or poor customer service and rude employees account for nearly 60 percent of all complaints.

GetFiveStars co-founder Mike Blumenthal told Small Business Trends in an interview recently that both these problems could be systemic within your small business.

“There are some businesses that just don’t care,” he said.

But even though customers are going to complain for as long as the sky is blue, it doesn’t mean your company should ignore them. In fact, it’s very advantageous for your company to address any and all complaints … and quickly, too.

“I see complaint resolution as a huge ROI (return on investment) opportunity,” Blumenthal said. “You have a 93 percent chance of getting them back (as a customer).”

How do you address customer complaints? Blumenthal says that creating a system for handling complaints is paramount. Identify the steps your company should take when a customer has an issue.

Make a system that identifies and even tries to regulate how complaints are filed (online forms, in-store boxes, etc.) and then the path each complaint should follow through management in order to reach resolution. Decide who in your company should handle complaints and even have a system in place for resolving the problem.