5 Hacks for Mission Impossible: Bring Back Your Facebook Organic Reach 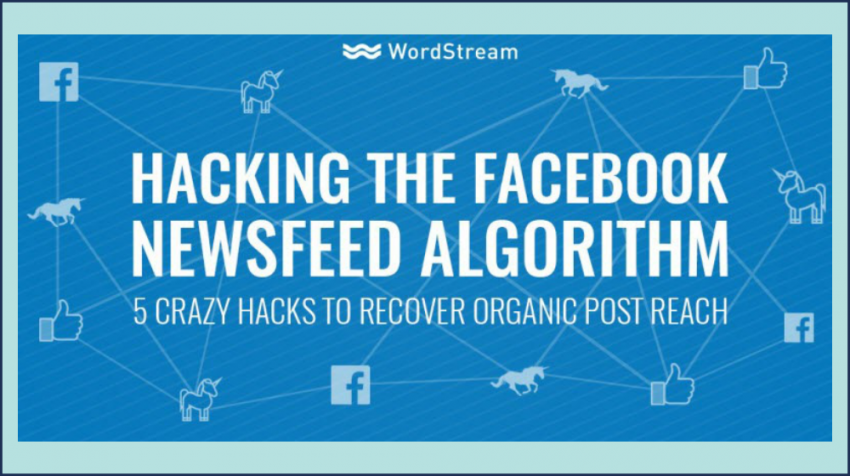 Ladies and gentlemen. We come together today to once again mourn the loss of Facebook organic reach, to share the grief all of us marketers feel. And perhaps, in that sharing, we can find the strength to look toward the future with some hope.

Yes, organic reach on Facebook is abysmal and getting worse, thanks to the latest announcement from the social network that’s visited by more than a billion users every day. Facebook will show more funny videos and baby pictures posted by family and friends instead of news and other marketing content from brands, businesses and publishers.

How bad is organic engagement on Facebook? On average, it’s somewhere in the neighborhood of less than one percent.

Every once in a while, one of your posts might still get tons of organic engagement. But it’s fast becoming mission impossible. 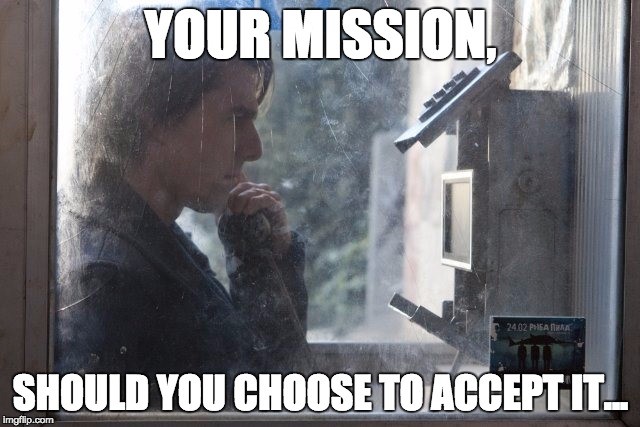 Facebook’s algorithm is powered by machine learning. While I don’t know the secret formula Facebook uses, we know from a computer-science perspective that machine-learning algorithms learn by testing and figuring out how people react to those tests.

So what’s the solution?

Your mission, if you choose to accept it, is to mitigate the loss from the latest Facebook newsfeed algorithm. You must raise your organic engagement rates.

Let’s meet your new weapons — the five crazy hacks that will help you do what’s said to be impossible: hack the Facebook newsfeed algorithm.

Note: Some of these hacks involve spending a little bit of money. Others are totally free. All of them are totally worth your time.

Listen up: Preferred audience targeting is a brand new Facebook feature that works just like ad targeting, but for your organic posts. That’s right, this new feature lets you target your organic updates as if they were ads, for free. Facebook lets you target your update so only the people who are most likely to be interested in your update will see it.

Here’s where the preferred audience targeting option can be found:

This feature is so powerful because not everyone who follows your Facebook page is going to care about every single update you publish. If you want to start raising your organic engagement, you need to stop broadcasting to all of your followers and focus on those people who are most likely to engage with specific updates.

Think about it. Why do people follow huge companies like IBM or GE? It could be for any number of reasons.

Facebook’s preferred audiences feature is pure genius for companies that have a variety of products and divisions, or that operate in multiple countries. You can narrow the targeting based on users’ interests and locations to reach the people you really want without bothering the rest of your followers. 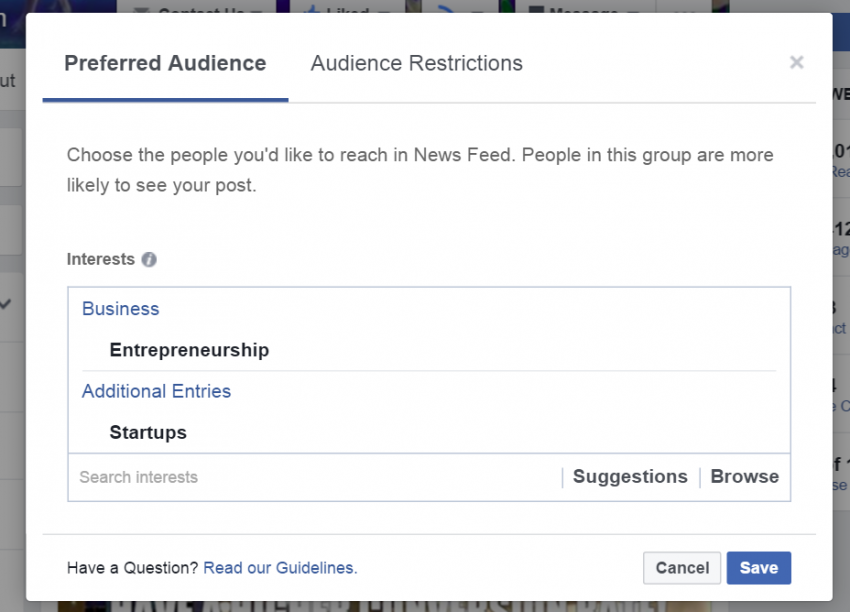 This feature also has benefits for smaller companies and publishers. Take me for example. I post updates on a wide variety of topics, including online advertising, entrepreneurship, social media marketing, SEO, branding, and growth hacking.

Preferred audience targeting allows me to decide who sees my posts — or who won’t see my post, using audience restrictions: 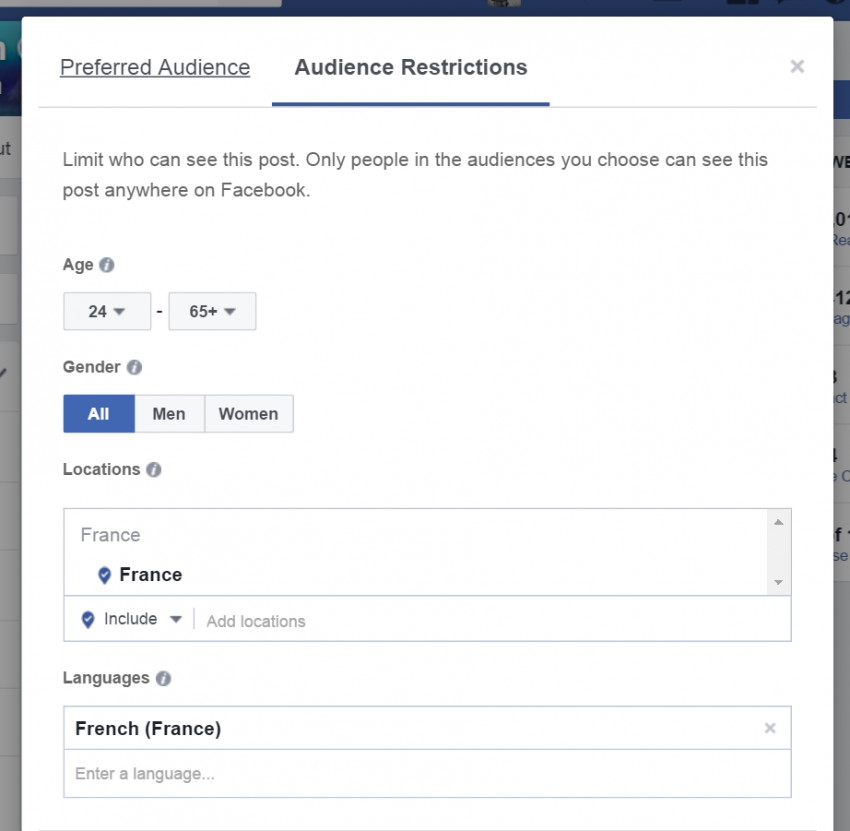 Here’s another example. Let’s say you’re a French clothing retailer with locations in France, Poland and Germany. You could make it so that only French-speaking millennial females who live near your locations will see your post announcing your latest deals.

Remember: everybody who likes your page isn’t your target market. Plenty of random people will like your page over time, but then never engage with your updates, visit your website or buy from you.

If you can only reach one percent of your audience, you should more narrowly target the people who are truly interested in what you have to offer. Giving people what they’re interested in is what great marketing is all about — and, in the process, it will help you raise your Facebook engagement rate significantly. 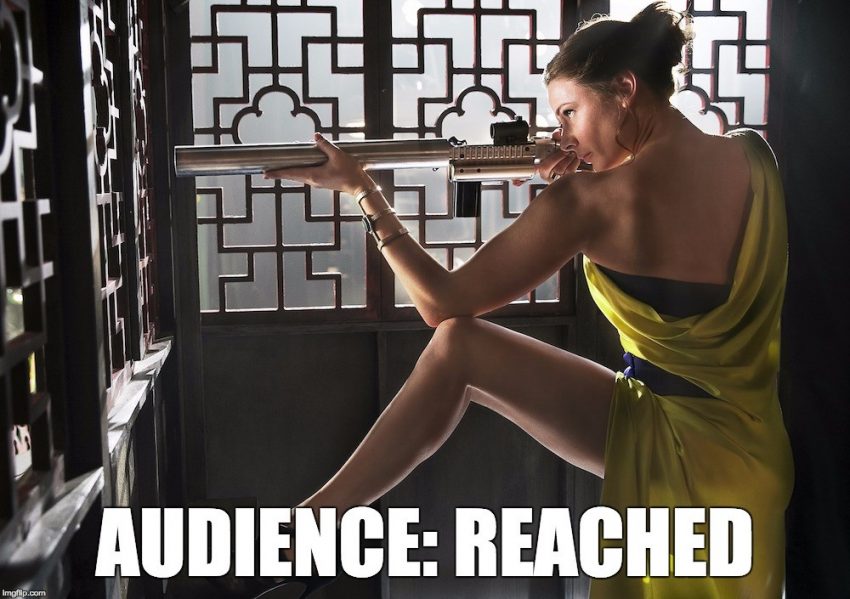 The Unicorn Detector Pyramid Scheme is the process you can use to separate your content unicorns from the donkeys.

What is a content unicorn? Well, content becomes a unicorn when it is clearly among the top one to two percent of all of your content. These are your most rare and beautiful pieces of content that attract the most shares, engagement and views.

A content donkey, on the other hand, doesn’t stand out at all. At most, it’s average. Ninety-eight percent of your content will be donkeys that get average engagement — again, less than one percent is the average organic engagement on Facebook, which is insanely low, right? 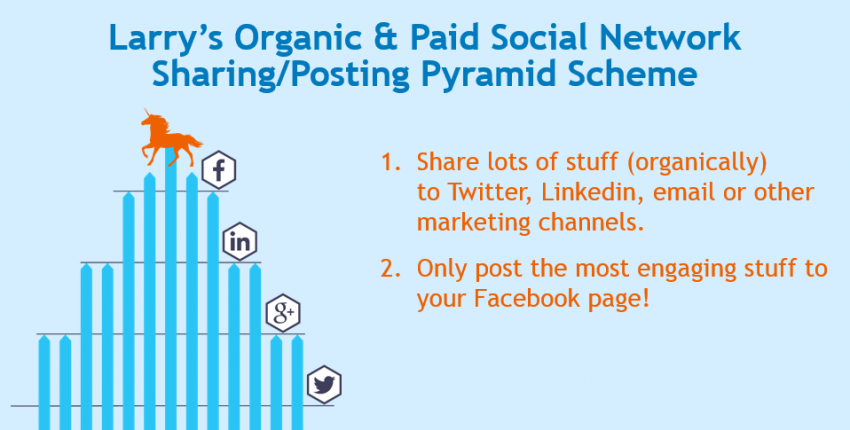 Post lots of stuff on Twitter — somewhere around 20 tweets per day. But imagine that every tweet has been infected with a virus, one that will ultimately kill them without the antidote within less than 24 hours.

The only cure for these infected tweets? They need to get a significant number of retweets, clicks, likes and replies.

Examine your top tweets in Twitter Analytics. Those tweets with the most engagement — your top 5 or 10 percent — have survived! 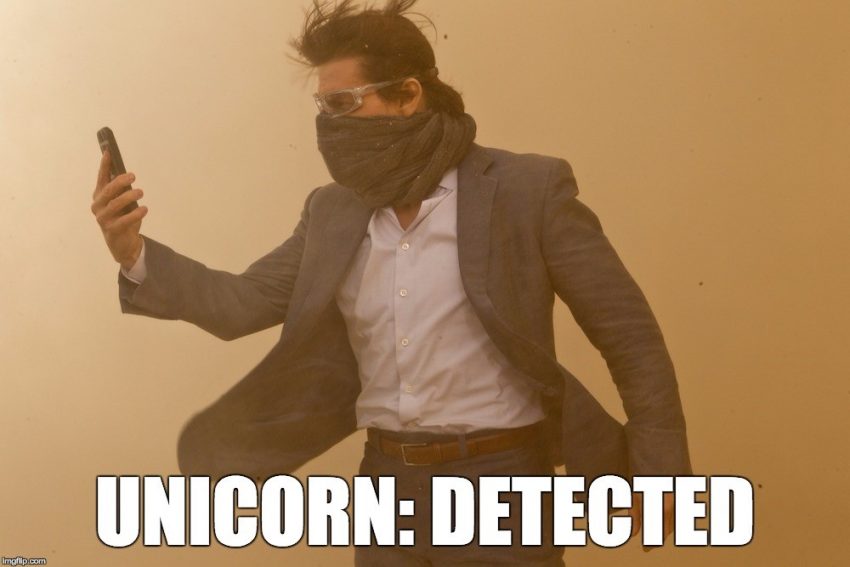 You can use Facebook’s Post Engagement Ads to give your posts a bit of a push. Yes, that means you’re spending a little money to “earn” some free reach in the news feed. 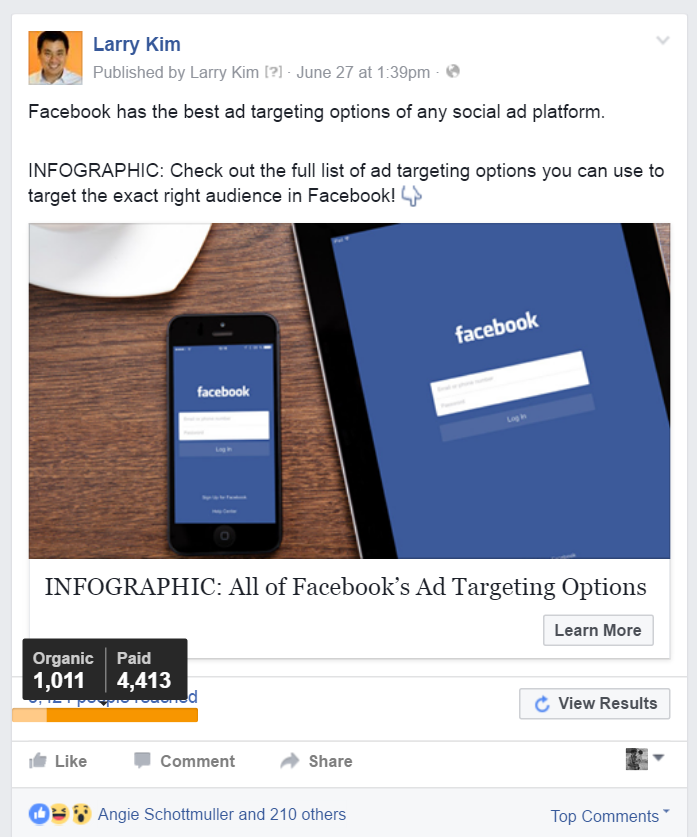 For example, let’s say I posted the above update only on my wall. The engagement is going to be pretty low. Maybe a few hundred people will see it.

So what happens if I spend just $20 to promote it? In this case, I paid for more than 4,400 impressions (clicks, follows, likes, etc.), but also got more than 1,000 organic engagements for free as a result.

How? Whenever someone shares your promoted post, it results in more people seeing it organically in their newsfeeds and engaging with it. 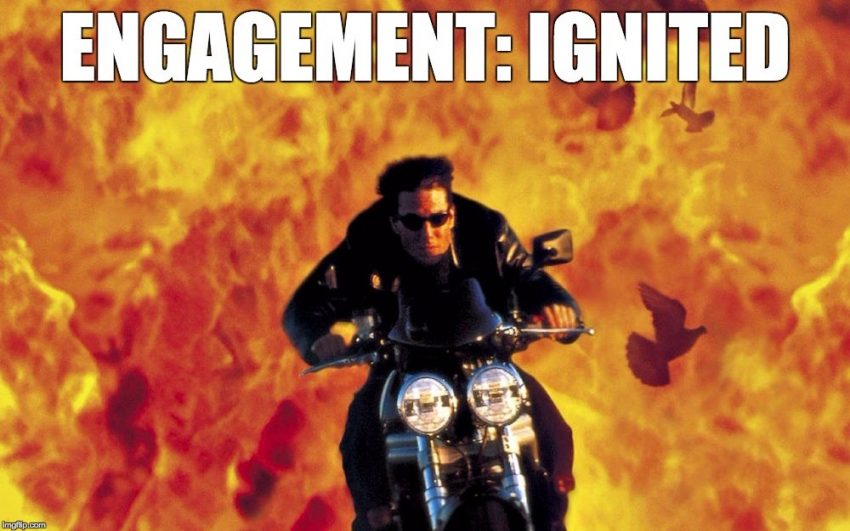 Did you know there’s a way you can selectively invite people who have recently engaged with one of your Facebook posts to like your page? This is a valuable but little-known feature available to some (but not all) pages.

You want people who engage with you to become part of your Facebook fan base. You know these people like you and are more likely to engage with your content because they’ve done so in the past. 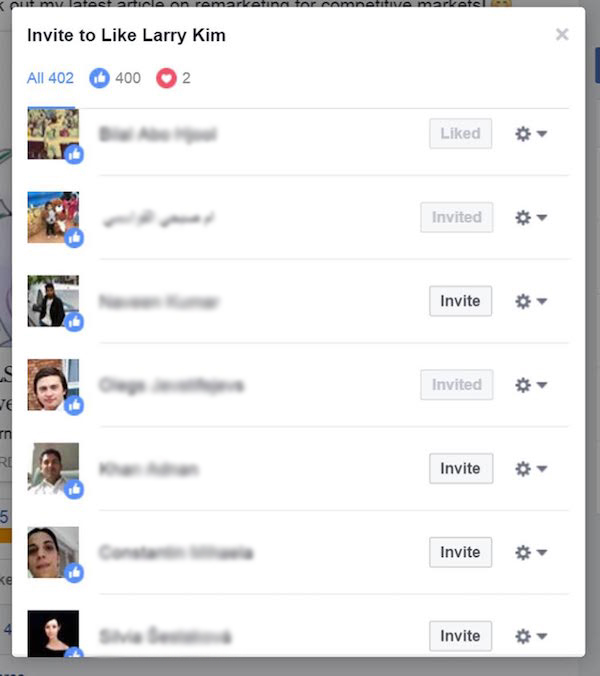 Here’s how you do it: Click on the names of the people who reacted to your post (liked, loved, etc.). You’ll see three types of buttons (Invite, Liked, Invited). Clicking on that Invite button will send an invitation to people who engaged with one of your Facebook posts to like your business page.

Does it work? Yep. Between 15 to 20 percent of the people I invite to like my page are doing so.

Oh, and did I mention it’s totally free? You can read more about the Facebook invite button here.

If you want to further increase your Facebook following, you could run a remarketing and list-based Facebook Fan / Page Promotion campaign, but I wouldn’t recommend it. I don’t think it’s a good investment unless you have a ridiculously low number of followers. You’re better off doing nothing. 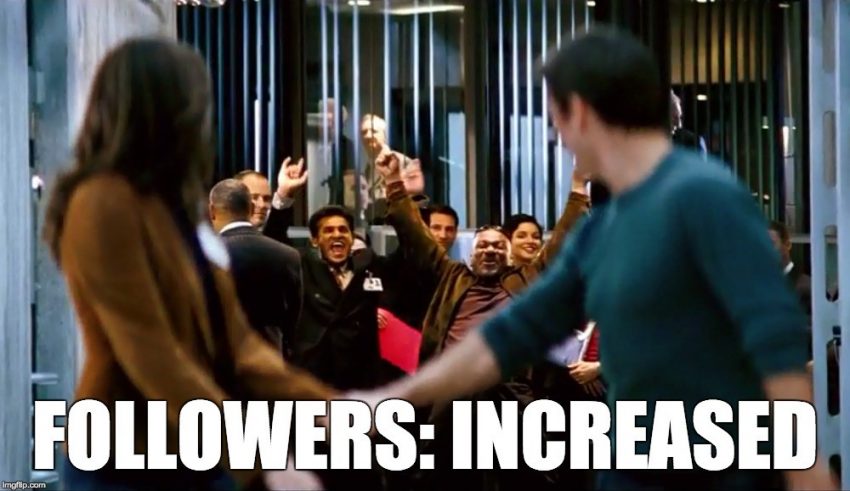 The decline of organic reach almost mirrors the rise of video on Facebook.

Users watch more than eight billion videos every day on the social network. And these videos are generating lots of engagement.

Just look at this recent research from BuzzSumo, which examined the average total number of shares of Facebook videos: 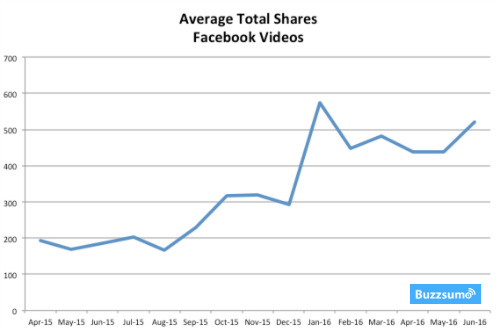 Facebook is doing its best to try to kill YouTube as the top platform for video. If you haven’t yet, now is the time to jump on the bandwagon.

Stop sharing vanilla posts that get little to no engagement. Add some video into your marketing mix! That should help improve your organic engagement because engagement begets engagement. 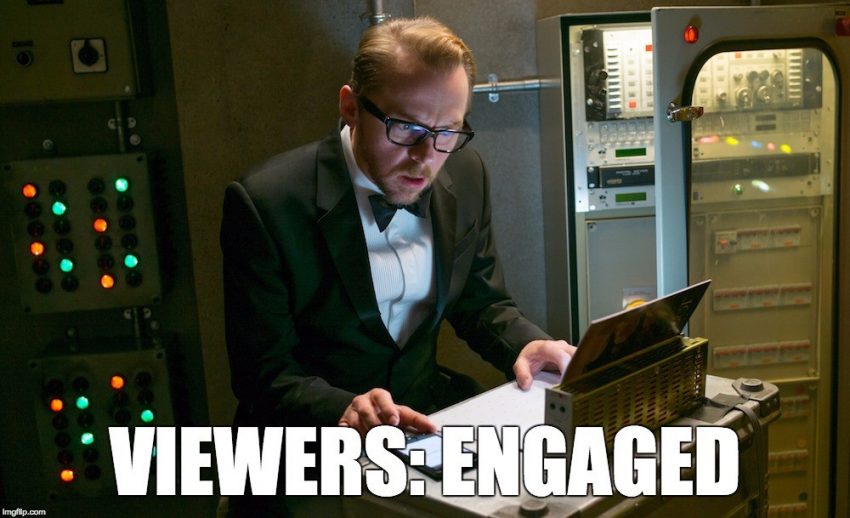 Facebook organic reach is pretty terrible. That’s why you should start treating your organic Facebook posts more like a paid channel, where you have to be pickier and optimize to maximize engagement, in the hopes of getting more earned organic engagement.

We’ll never get back the Facebook organic reach we’ve lost over the past few years. However, these five hacks will help dramatically increase your organic engagement and mitigate your losses from the latest Facebook news feed change. 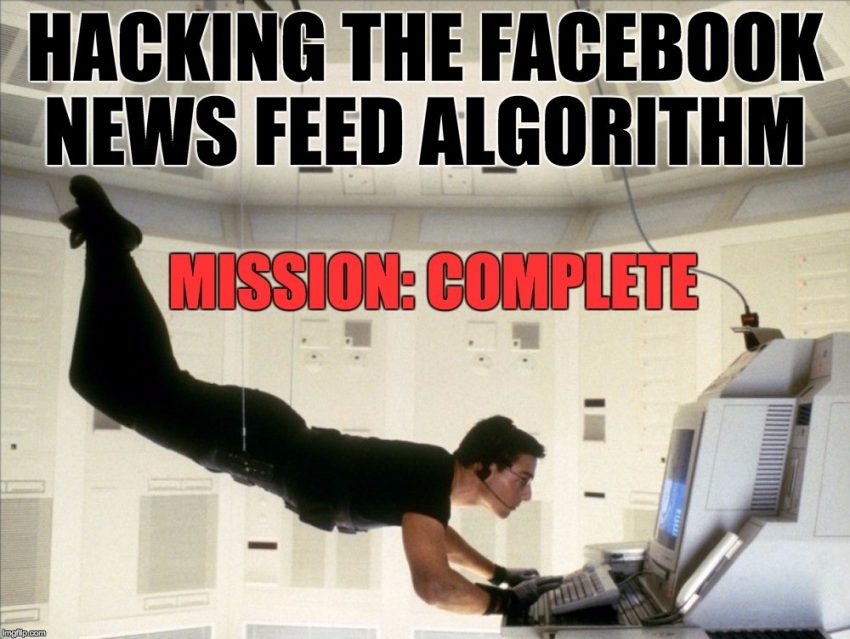