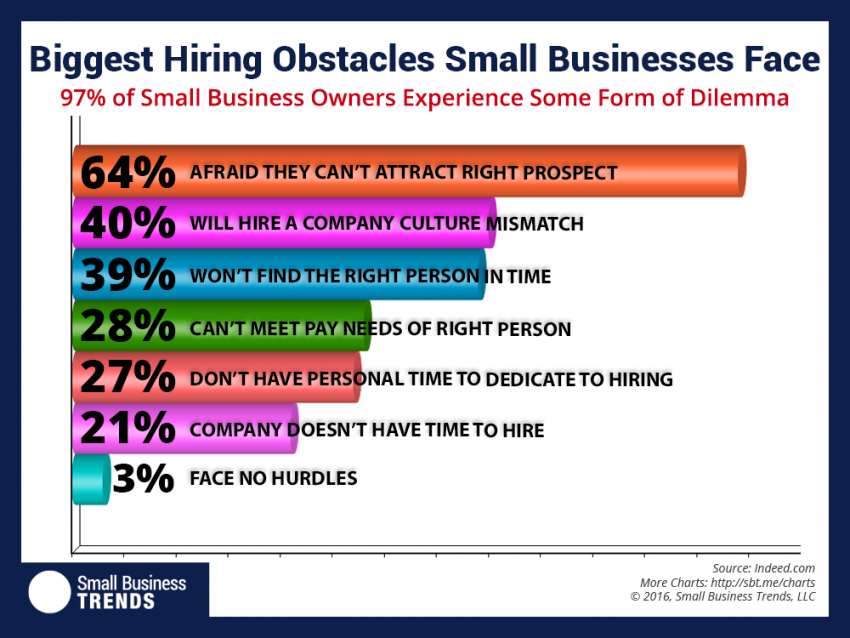 You’d guess that the biggest problem small businesses face when hiring is finding the right person for the job.

Actually, it’s the opposite. Small businesses worry that, while there re qualified people out there, they won’t be able to attracting them.

Or so says a new survey of small business owners conducted by Indeed. The company has been investigating hiring trends among small businesses in the U.S.

Specifically, the survey found that 64 percent of small businesses identified attracting the right candidate for their open job as the biggest obstacle toward making a hire.

The same survey found 40 percent of small businesses worry most about making a hire who is a good fit with the company culture.

Nearly the same amount of those responding — 39 percent — said finding the right person within the amount of time they had allotted for making the hire was their biggest challenge.

Just more than a quarter of those responding — 28 percent — said being able to meet their ideal candidate’s compensation request was the biggest worry.

Twenty-seven percent told Indeed that their biggest obstacle when hiring is finding time out of their own schedule to dedicate to finding the right candidate.

And 21 percent said that carving out some time as a company to find the right person to bring on board is their biggest challenge they face when hiring.

Only three percent of those responding to Indeed said they don’t really face any obstacles when hiring.

So, what should you get from this survey’s findings?

First off, expect hurdles and be prepared for them when hiring someone new at your company. Few, if any, small businesses go through the process without some sort of hiccup.

And this survey identifies some of the biggest hurdles you’re likely to face. So with this information in hand, you’re already at least partially prepared for the problems that might lay ahead.

So what can your small business learn from all this? Being prepared ahead of the hiring process — before you even schedule your first interview — is one vital way to make the process go more smoothly.

Include at least one other person within your company  in the process, too. How else will you get a true sense of the company culture?

In terms of attracting the right candidate — after all, it’s the biggest hurdle identified by Indeed’s respondents — you’re going to have to canvass the right places.

Recruit in multiple locations. Consider and be open to alternatives to the plan you had originally for the open position with your company.

If you were thinking of hiring an on-location, full-time employee for your job but you believe you may have found a good fit who wants to telecommute, you should be open to this.