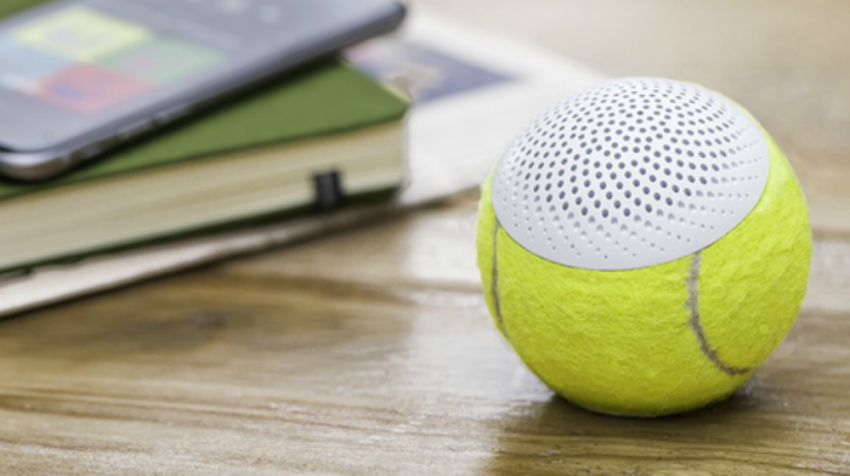 As Serena Williams and Andy Murray celebrated their 2016 Wimbledon victories this weekend, few fans probably considered the tennis balls they used during the tournament — those that don’t wind up as the cherished keepsakes — would likely end up in the trash. But this fact hasn’t escaped the attention of Richard Moss, a former pro-level player and design engineer, who has created a useful re-purposing of these balls by converting them into Bluetooth speakers called the hearO.

The All England Club, home of Wimbledon, uses close to 55,000 balls for the famous tournament alone, and a total of 230,000 are used in the four Grand Slam events — including Wimbledon, the U.S. Open, the Australian Open and the French Open — every year.  There is no telling how many of these tennis balls Moss will get his hands on, but he has launched a Kickstarter campaign to up cycle as many of them as possible for his unique new product.

The Association of Tennis Professionals and Women’s Tennis Association, the governing bodies of professional tennis, have already been contacted about the project. And, if all goes well, the company wants to form an official partnership at the end of the campaign in order to get authentic championship balls from the four Grand Slam events for use in  their eventual production.

Should he ever run out of championship tournament balls to recycle, Moss could always tap into the 300 million tennis balls that are manufactured around the world each year. The more tennis balls the better for Moss’ overall agenda to protect the environment by finding a unique new use for these discarded items.

As for the hearO, it uses Bluetooth 4.0 to pair with your smartphone, tablet or computer so that the 3W speaker can pump out your favorite tunes — or whatever else you happen to be listening to. The 400mAh battery delivers five hours of wireless power at 70 percent volume, and when you’re ready to recharge, you just place it on the magnetic cradle and it is ready to go.

The speaker is designed to fit perfectly with the tennis ball thus preserving the memorabilia aspect, while providing some useful functionality. This includes the ingenious way in which the on button is placed on the tennis ball.

According to the company, “Our final tennis ball skin is a slanted form that retains 75 percent of the original ball, striking a balance between ergonomics, aesthetics and sound projection.”

The hearO was developed in partnership with several specialized firms, including an electronics design expert at the Innov8 Group in Paris, and a rubber cutting specialist from the Woodash Group in the Boot and Shoe Quarter of Northampton, England.

So if you love tennis, and you want to have a memorabilia from Wimbledon, you can head over to the hearO Kickstarter page and support this venture. The hearO set includes the speaker, charging cradle, USB to micro USB cable and the reusable tin for £50, or around U.S. $64. And if you want a real tennis memorabilia, a hearO signed by Pat Cash, a former Wimbledon champion, can be had for £150 or $194. 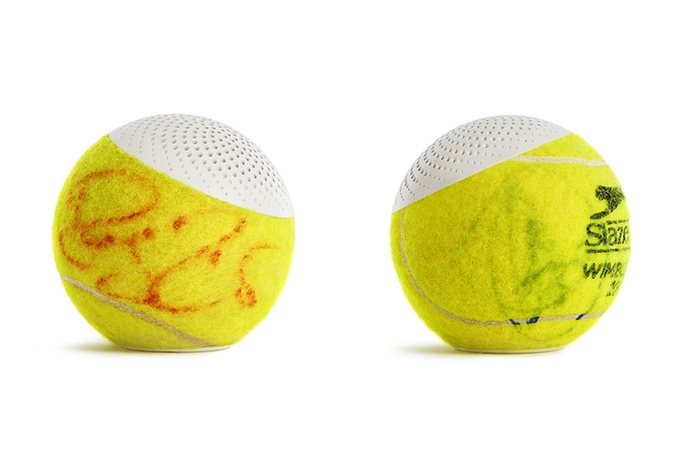 There are also prototypes signed by Roger Federer (left) and Novak Djokovic (right) at the 2015 ATP World Tour Finals in London.

The sports memorabilia market is huge, with licensed (unsigned) sports merchandise estimated at $12 billion, and the autographed market coming in at $1.5 billion, this according to a study conducted by SportsmeMorabilia.com.

Moss has captured a unique way in which tennis fans can enjoy this memorabilia while also owning a useful product and protecting the environment.