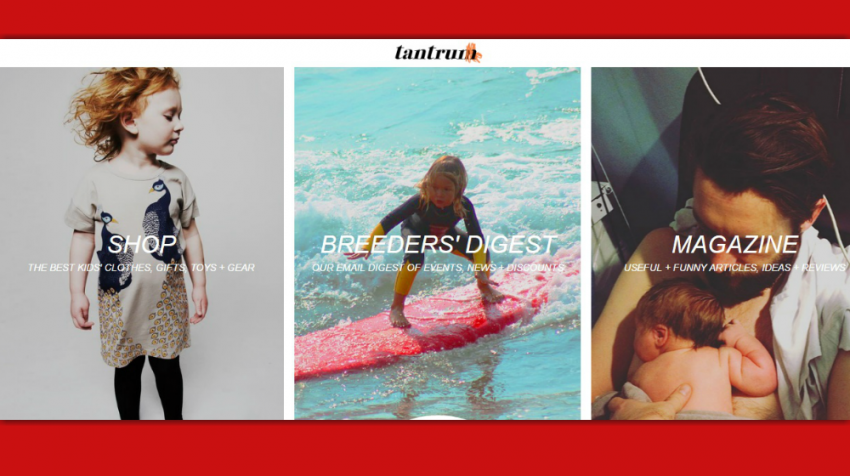 Search the web for parenting sites and you’ll likely find a lot of practical tips and cute shops. But if you want something that’s both modern and fun, you might have a more difficult time.

That’s why the founders of Tantrum XYZ started their company. Two out of the three founders had recently become new parents. And they were unsatisfied with the parenting resources that were already out there, especially since they were design and tech-conscious.

The Niche Audience is Us

Co-founder Lisa Williams said in an email to Small Business Trends, “When I was on maternity leave last year, I struggled to find a website which spoke my language when it came to having a baby. I wanted something fun and unpatronising, which informed me without scaring or judging me. Simultaneously, Ben [Wynne-Simmons, co-founder] — who along with Shane [Feng, co-founder] was investing in and mentoring digital start-ups as Coral Reef – became a father for the first time, and saw the need for new parents both to absorb a lot of information quickly and to buy a load of new clothes and gear for their child. We arranged to meet to discuss, and that was enough for me to hand in my notice at Conde Nast, where I worked previously.”

The actual site is a mixture of different things. It features an ecommerce store with design conscious clothing, toys and gear for kids, along with an email digest and magazine that feature information and articles all aimed at modern parents.

For example, the shop section features style conscious clothing items from designers like Stella McCartney and Boden instead of plain old onesies and matching sets. And the content section features things like unique recipes, upcoming trends and even comedic pieces about things like “dad dancing.” The company even hosts a regular networking event for parents in startups.

And while there may be some other parenting sites that cater to this younger or more modern niche, the variety of different offerings is what makes Tantrum XYZ really stand out.

Williams says, “We have found shops with token content, huge forums for parents, and brilliant tongue-in-cheek blogs, but ours is the first site which gives equal balance to editorial, community and ecommerce, providing a seamless experience for time-poor but design-conscious, tech-savvy parents.”

Another thing that sets the London-based startup apart is its usability. Since the team knew that they’d mainly be targeting millennials and other tech-savvy parents, they had to make sure that every part of the site would be mobile friendly and accessible on a variety of different devices. The site also currently caters mainly to parents of kids under five, since that’s more common in the age group of their target audience. However, Williams said that they hope to grow the site’s audience over time as their own kids grow.

In fact, their own experience as parents has had a huge impact on how the founders run their business.

Williams explains, “Life changed overnight and, like many new parents, we both felt slightly out of our depth. We are both into tech and design, and found that many retail and information sites seemed old-fashioned in style and ethos. We knew we could create something we would both enjoy using, and which our friends and, dare I say it, other millennial parents would too.”

Aside from potentially growing the site’s audience, the Tantrum XYZ team has big plans for the future. Currently, a big focus for the team is gender equality. Since some recent laws in the UK have given fathers a chance to share more of the potential parental duties, and similar discussions have started in other places as well, the founders think this is a major issue for many modern parents. And that’s the type of content that they work to feature, especially since they feel that type of thing is often overlooked on other parenting sites and resources.

Despite a recent vote that could sever the U.K. from the EU permanently, the Tantrum XYZ team is determined not to let Brexit have a negative impact on their company or the vibrant startup scene in London. Though there is some worry that things like shipping costs could be affected in the short term, the team is confident that they can overcome those hurdles, and that the startup community will find a way to still share digital talent with a more global community.