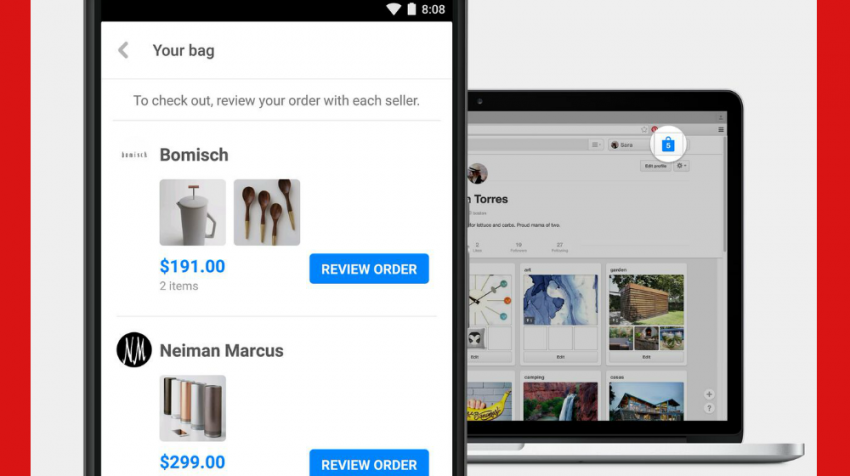 Pinterest is finally introducing Buyable Pins to the web version of its site — and a new shopping bag is being rolled out too.

Last year, Pinterest introduced “Buyable Pins” on mobile and later integrated them into eCommerce platforms such as Bigcommerce, eBay-owned Magento and IBM Commerce. Now, the social network is finally announcing that the Pinterest buy button that was first launched on the app is going to be available on the web. And the “new shopping bag” will allow users to shop for multiple items on the site from wherever they are.

The shopping bag is basically a modern implementation of a shopping cart, which should ideally see merchants increase their sales as it encourages people to buy more items.  The company has also introduced a new shopping section on Pinterest Shop, with sections for top shops from vendors.

It seems almost like an afterthought for Pinterest to add Buyable Pins to the web version of the site. However, the feature now allows viewers to see other products from the specific vendor. For instance, if one is viewing a Channel bag, below it they will be able to see a few other bags from the same seller. This allows merchants to advertise and even sell a few more products from their collection.

Small business owners already harnessing the power of Pinterest as a sales and marketing tool will also be delighted to note that the social networking site has introduced an enhancement to its visual search capability. Pinterest’s iOS app users can now find an item they want by simply tapping the camera button, taking a picture and searching for the item on the app. This ideally means that users will have an easier time finding a product and sellers will also increase their sales.

Buyers can also easily look for a brand that interests them.

“If you’re looking for something from a brand you love, head over to their profile and tap the new filtering options to find popular products, sale items and shipping deals,” Pinterest’s Product Manager Tim Weingarten said in a post on the official Pinterest blog.

As of yet, Buyable Pins are only available to a select number of Pinterest users and you must have a Pinterest business account in order to be considered. However, the number of merchants able to use the pins is growing and clearly not limited to large brands.

“We’ve partnered with 20,000 merchants — big and small — to bring over 10 million unique products to Pinterest,” added Weingarten. With the involvement of so many merchants already, acceptance into the program must not be too rigorous.