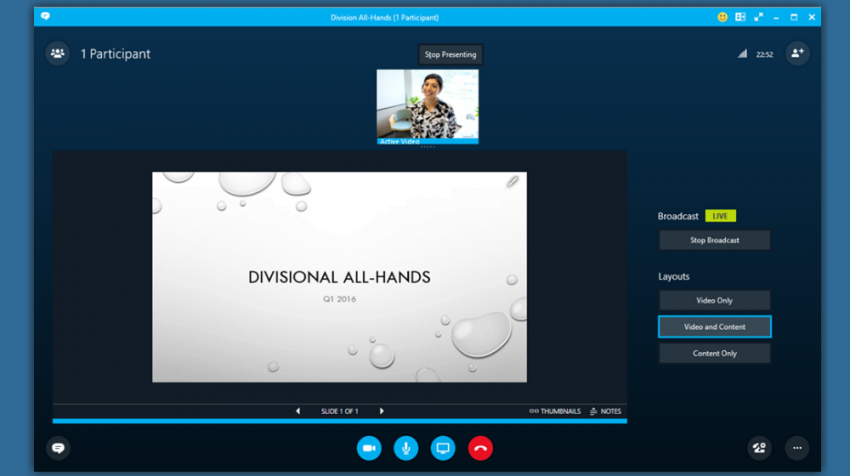 A communications tool used to facilitate online meetings will soon have the capabilities to translate the remarks of participants and preserve a written transcript of what was said. Microsoft (NASDAQ:MSFT) announced last week at its Worldwide Partner Conference in Toronto that it would be adding automatic transcription and translation for Skype Meeting Broadcast.

Certainly, being able to communicate with anyone around the world without the barrier of different languages has clear business advantages. But real-time translation has been, and still continues to be, one of the biggest challenges in the IT sector. Although some great developments have introduced some innovative products for real-time translations, there is still a ways to go before it is perfected.

The translation that will be part of Skype Meeting Broadcast won’t be available until the end of 2016, and there is very little information as to what languages are going to be supported. However, using Skype Translator as a measuring stick, it can be assumed there will be at least seven languages and possibly more. What we do know for sure is, this new feature will provide live closed captioning during presentations, thus allowing users to choose the language they are most comfortable with so they can participate.

Whether your company is a global enterprise or a small business looking to deliver services globally, the presentations, webinars, lectures or lessons you present will be able to attract a global audience. The technology will also give individuals who are hearing impaired a great way to participate in real-time meetings and presentations instead of waiting for transcriptions at a later time.

So what is Skype Meeting Broadcast?

Skype Meeting Broadcast was released in 2015 as part of Office 365 and Skype for Business Online, for producing, hosting and broadcasting meetings to large online audiences. It enables you schedule meetings for up to 10,000 people by using the Skype Meeting Broadcast scheduling and management portal. People that attend the meeting can participate, and they can do so on any device no matter where they are located.

Here’s a closer look at how the technology works:

There are some requirements for the different components of the platform. Attendees will need browser enabled devices with Internet Explorer 11, Chrome, Firefox, OSX Safari, iOS 8 or later and Android (KitKat). Producers and presenters of the meetings require Skype for Business client for Windows and a Skype for Business Online Standalone Plan 2 (or 3), or enterprise E1, E3, or E5 license.

In a world that is getting more connected and interdependent on each other, language still represents a formidable barrier. Skype Meeting Broadcast looks to make it much easier with automatic transcription and translation of different language.