The Gig Economy is Booming and Here’s Why (Infographic) 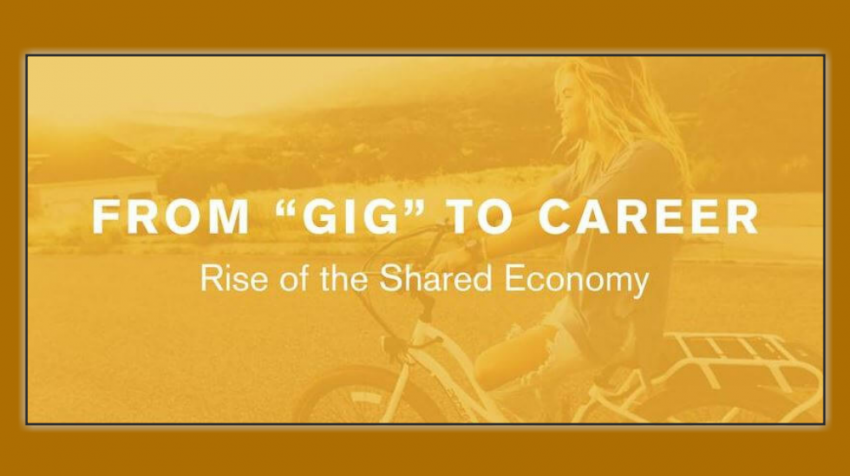 Whether you’re a seasoned freelancer or seeking freelance work for the first time, you’ve probably noticed how businesses such as Uber and Airbnb are hiring. These companies are only two examples of the burgeoning “sharing economy.”

What is the sharing economy? Well, start with an app or a website. Does it facilitate the exchange of goods, assets, and/or services between a wide variety of individuals? If you answered yes, then that technology platform probably belongs to the sharing economy.

It goes by other names as well, according to the Aspen Institute (PDF), which is a nonpartisan forum for values-based leadership and the exchange of ideas. The sharing economy might also be called the “collaborative economy,” “gig economy,” “on-demand economy,” “collaborative consumption,” or “peer-to-peer economy.” These terms don’t mean exactly the same thing, but the overlap is substantial.

Why is the Gig Economy Exploding?

Content marketing agency Column Five, along with Jobvite, a recruiting and applicant tracking software provider, created the infographic, “From ‘Gig’ to Career.” What it shows is a sector experiencing explosive growth.

The data shows a major spike in the number of Uber drivers in the US from approximately 1,000 in July 2012 to 40,000 in January 2015. Airbnb’s data shows a steadily increasing number of worldwide guests staying with Airbnb hosts from zero in 2010 to 17 million in 2015.

The growing popularity and sophistication of smartphones is a major reason for this growth, according to the infographic. It’s clear, too, that companies like Uber and Airbnb are providing an attractive alternative to traditional taxis and hotels.

Who’s Seeking Out these Gigs?

As these sharing-based companies continue growing and expanding their offerings to meet the demands of their clients, they are also hiring more contractors. And they are finding plenty of people out there who are either ready to leave the “9-5” grind or are looking to supplement their income.

According to Jobvite’s annual “Job Seeker Nation Survey,” 19 percent of American adults who participated in the survey said they have held a gig-type job. The infographic shares interesting demographic information about who holds gig jobs in the US:

The Future for the Gig Economy

The future looks bright for the gig economy. Not only are more and more people finding work as independent contractors in the shared economy, they’re reporting pretty high levels of satisfaction with the work, according to “From ‘Gig’ to Career.” The flexibility is a plus for many, as is the independence that comes with self-employment.

But perhaps you want to find out for yourself …

Learn more about the sharing economy in the infographic below.