Want an Olympic Class Business? Train with ‘The Golden Rules’

"The Golden Rules: 10 Steps to World-Class Excellence in Your Life and Work", written by Michael Phelp's swim coach, Bob Bowman, shares the principles that can help anyone train for Olympic-level success in any pursuit, whether it's on the Olympic stage or a sales presentation. 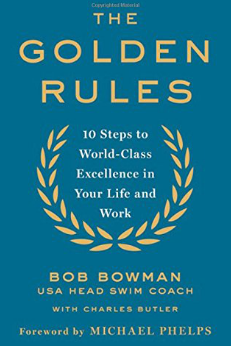 The Olympics represent the pinnacle of human performance. For Bob Bowman, swim coach of 18-time Olympian champion and swimming phenom Michael Phelps and coach of the U.S. Olympic swim team, getting to that pinnacle involved understanding and developing The Method. This “Method” is Coach Bowman’s explanation for a process that leads to the superhuman success, no matter the pursuit.

The Golden Rules are ten principles designed to help any person, athlete or not, master “the method” for extraordinary success.

What is The Golden Rules About?

Like the book’s subtitle  — “10 Steps to World-Class Excellence in Your Life and Work” — suggests, The Golden Rules details how to perform at a high level. It is a bit more than that, however. The Golden Rules is about the development that leads up to that performance.

Bowman does more than just provide a “Top 10” list. Bowman goes even deeper, using stories from his own coaching experience to show how that experience embodies (or didn’t embody) the Golden Rules. For example, Bowman shares how training under pressure ultimately helped Phelps win his seventh Olympic medal. Bowman also shares how the lack of a goal after reaching the top left Michael Phelps open to less-than-Olympian exploits (check the tabloids).

Bowman provides these stories to show that The Golden Rules are a set of static “success steps” that you follow once to completion. Instead, following The Golden Rules is a dynamic process of success, one that coach Bowman and Phelps would readily admit they are still on. The point, however, is to show the path that helped them achieve incredible success and will hopefully guide them in the next Olympics.

Bob Bowman is the current coach of Arizona State University swim team, appointed head coach of the 2016 Olympic Team, and current coach to the most-awarded Olympian of modern times, Michael Phelps. He was a former swimmer at Florida State University, developing his coaching craft in several coaching positions before encountering Michael Phelps. From that point on, the rest became sports history.

What Was Best About The Golden Rules?

The best part of The Golden Rules: 10 Steps to World-Class Excellence in Your Life and Work is the authenticity Bowman brings to this tale. Bowman revitalizes success principles, many of which readers have heard before, in his own style and flair. Bowman has an “over-the-top” personality and it shows through his word choice and selection of stories.

There’s also the added bonus of getting to learn a little more about Michael Phelps and his journey toward success, the stories of how Phelps started as an 11-year old phenom and ended up an Olympian champion a few short years later.

The Golden Rules focuses the majority of its time on preparation for the competition, not the particulars of the competition. In other words, the book will provide insight on the principles a sales team, for example, should focus on, to become better. It will not detail how to set up the sales training program to do it.

In other words, if you really like sports (emphasis on the really) and want to spark inspiration from it, this book will provide the initial motivation you need to get started.

Why Read The Golden Rules?

The Golden Rules is an excellent story that really drives the point home of disciplined training for superior performance that can be applied to any discipline (making more sales, getting more page views, improving customer service, etc.). The book’s exuberant emphasis on principles as the foundation in whatever training you do is the key takeaway (and hopefully lesson) from the book.

What better way to share that lesson than the story of an 18-time Olympian champion and one of the greatest swim coaches of all time?