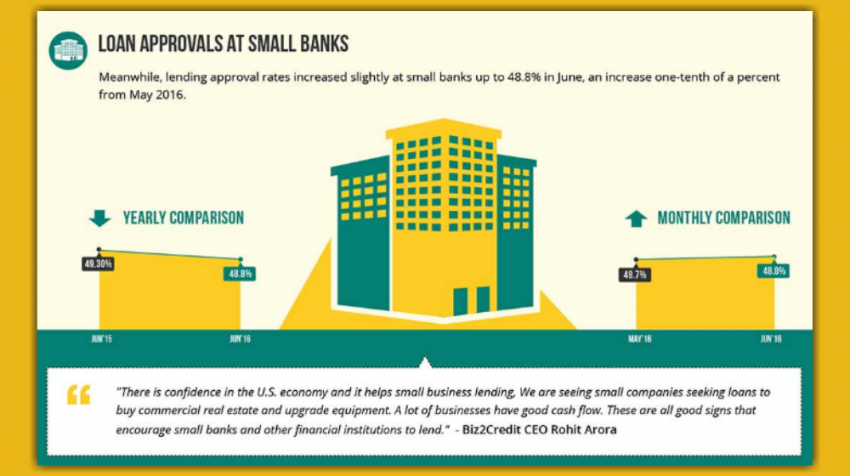 Contrary to some expectations, the great upheaval caused by Britain’s decision to leave the European Union — colorfully known as Brexit — has caused little economic disturbance at all here in the U.S.

That’s at least as far as small business lending is concerned. The Biz2Credit Small Business Lending Index for June 2016 indicates virtually no impact from the Brexit decision.

Brexit Effects? Nothing So Far

“We are yet to see any economic fallout from Britain’s decision to leave the European Union,” said Biz2Credit CEO Rohit Arora in a release announcing the new index report. “So far, the U.S. markets seem to have rebounded well from the initial shock of the so-called Brexit.”

This may seem surprising given all the dire Brexit predictions including some worry that small business lending would actually suffer as a result.

Actually, Brexit in some ways might benefit U.S. small business lenders. For instance, the U.S. dollar has gained over the British pound so small businesses will have a relatively easier time purchasing products from Britain. And banks may also feel a bit more at ease knowing that the U.S. currency is stable.

Of course, Biz2Credit’s current index results look back at June with the final Brexit vote coming more than halfway through the month.

Indications for the month were good overall with a 23.3 percent increase in small business lending at the big banks (those with $10 billion+ in assets).

Small business lending in small banks improved slightly to 48.8 percent. This is a one-tenth of a percent increase from Biz2Credit’s May statistics.

“There is confidence in the U.S. economy and it helps small business lending,” said Arora. “We are seeing small companies seeking loans to buy commercial real estate and upgrade equipment. A lot of businesses have good cash flow. These are all good signs that encourage small banks — and other financial institutions — to lend.”

Surprisingly, loan approval rates from one the index’s strongest performers, institutional lenders, dipped slightly one-tenth of a percent to 62.7 percent. However, it is in this one area overall, Arora feels, where uncertainties in Europe will eventually work in favor of U.S. small business lending.

“Despite this slight drop, look for institutional lenders to grow,” Arora added. “With the uncertainty in Europe right now, I expect to see more money coming into the small business lending marketplace from outside the U.S. Domestic investors are looking inward, and the U.S. economy is a safe haven right now. This is good news for small businesses seeking capital for growth. Industries including travel and restaurants are doing quite well at this point. Some food businesses have grown 10 percent in a year. These are solid growth figures.”

Alternative lenders are on average still approving more than three out of five loan requests. The same can’t be said about credit unions which continued their steady decline in loan approval rates. In June, credit unions approved an all-time index low of 41.6 percent.

The Bi2Credit Small Business Lending Index is based on a monthly analysis of 1,000 small business loan applications entered into the Biz2Credit loan platform. The online marketplace has helped arrange more than $1.4 billion in loans or small businesses all across the U.S.