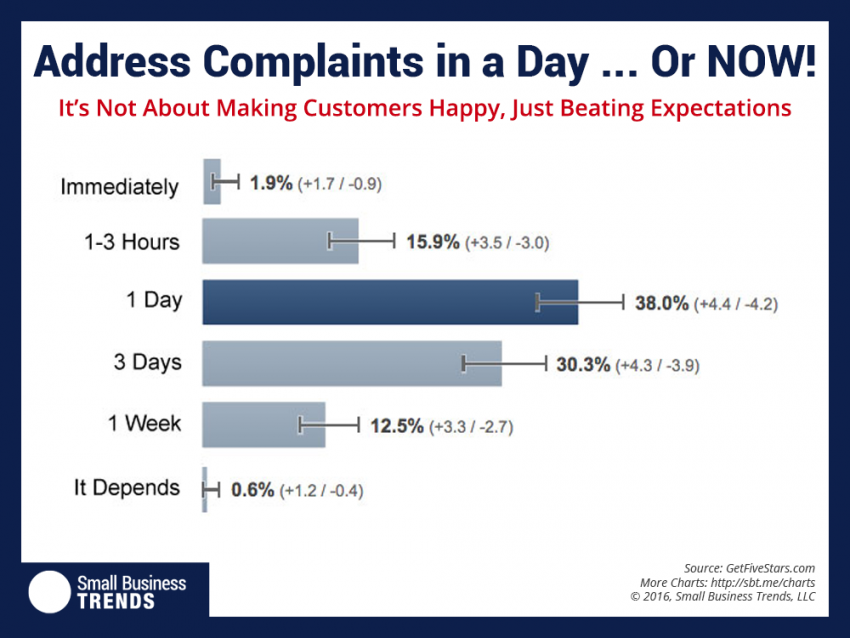 When you get a customer complaint, how fast do you respond?

You may have been told customer complaints should be resolved as soon as possible — and that’s probably true.

But would it surprise you to learn most customers have been trained to put up with a wait of between one and three days to have their complaints addressed? That’s according to new data from GetFiveStars, a company that’s created a platform encouraging small businesses to get feedback and reviews from its customers.

GetFiveStars co-founder Mike Blumenthal surveyed a group of 480 adults about how long they expect a local company to respond to a complaint. While 38 percent said a local business should respond to a customer complaint within one day, that wasn’t the real shocker. No, that came when a surprising 30.3 percent of those responding to Blumenthal’s survey said they believed three days was enough time to respond. Really?

That means two-thirds of your customers, presumably, don’t expect you to respond to their complaint right away.

It seems like a long time to let a complaint fester. And Blumenthal believes small businesses can thank big companies for lowering the bar.

He suspects that the approach taken by big businesses — particularly those that exist with little or no competition (like cable companies) — have trained the average consumer not to expect rapid response.

And some customers seem content to let their complaints go even longer than that without resolution. GetFiveStars’ data reveals 12.5 percent of customers don’t really expect a company to get back to them to resolve their issue in less than a week. These are some understanding customers indeed!

Exceeding Customer Expectations is Easy if You Address Complaints Quickly

But just because customers have been trained to put up with long waits to get their issues resolved doesn’t mean you should make them wait. Blumenthal explains. “It’s not about excellence. It’s about exceeding expectations.”

If you want to stand out from the competition — particularly big companies that make customers feel like their concerns don’t matter — then get in front of complaints right away.

GetFiveStars data shows that only 15.9 percent of those responding expect a company to get back to them in just one to three hours. While only 1.9 percent say they expect an immediate response.

But remember, this is only about what customers have been trained to expect from the companies with whom they do business. What would happen if your business went the extra mile?  How much good will could you generate for your business by addressing problems within hours instead of within days?

Well, a lot, it seems. Blumenthal’s data suggests 90 percent of customers whose complaints were addressed quickly and who felt their problems had been resolved to their satisfaction, would remain loyal to that business.

“You’re winning the battle for loyalty,” he explains.