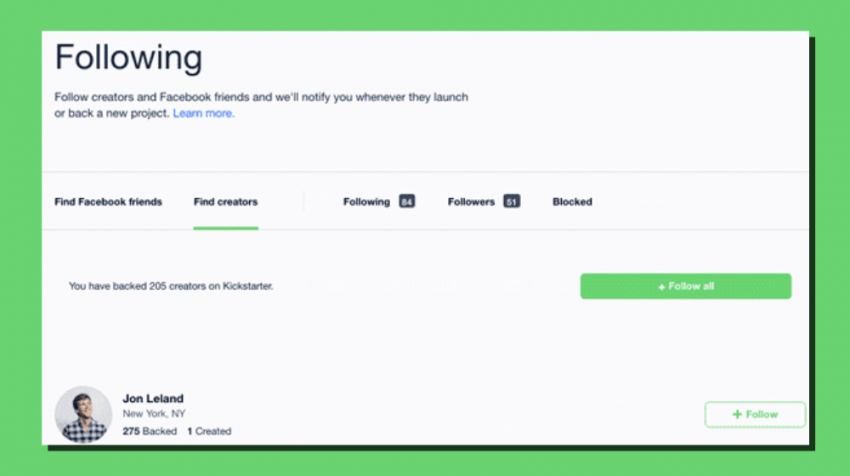 In news of interest to crowdfunding entrepreneurs, Kickstarter recently rolled out a new ‘Follow’ feature that allows users to follow creators directly and be first to find out when their next projects launch. Once you follow a Kickstarter creator, you’ll also be notified when they’ve backed a project that’s just getting off the ground, the crowdfunding company said.

“There are thousands of creative projects on Kickstarter at any given moment, and following creators you admire to get a sense of what inspires them is a great way to explore projects that are likely to speak to you — or to discover something completely unexpected and delightful,” wrote Justin Kazmark, a Kickstarter employee and the company’s PR spokesman, in a blog post announcing the new feature.

Kickstarter, possibly the world’s most recognizable crowdfunding platform, says it has helped more than 262,600 creators from all over the world successfully fund 313,023 projects since launching in 2009. Over 10 million people, from every continent on earth, have backed a Kickstarter project, the company’s website says.

Though popular with artists, musicians, filmmakers, designers, developers and other creators, the site has also become popular with startups seeking to crowdsource new products.

The company is hoping the new feature will help those using the site to find new backers by appealing to a larger social community who may be drawn to a project by others.

“As a creator, reaching new backers is key to growing your audience over time. Millions of backers all over the world enthusiastically look to Kickstarter for what’s next. The Follow feature is a way to connect with the Kickstarter community even after your initial project is complete,” said Kazmark on the Kickstarter official blog.

Getting started with the Kickstarter follow feature is pretty straightforward. Go to the listing of creators whose projects have been backed in the past and click the ‘Follow’ button alongside those that interest you. You can also browse the Advanced Discover recommendations page to find projects of interest, or follow creators directly from their profile pages.

The new features would seem to give the Kickstarter platform a more social feel. Creators can also promote their Kickstarter profile through existing social platforms like Facebook, Instagram and Twitter as another way to attract followers for future projects.