And Now, Let’s Turn Things Over to Bigfoot 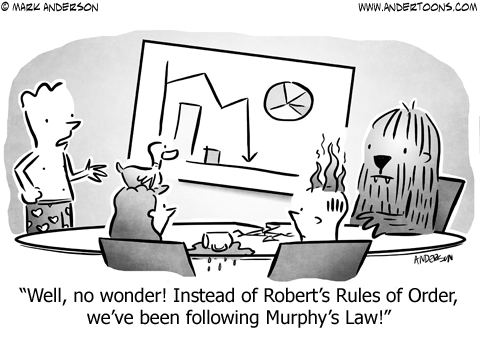 I’m old enough that I remember studying and using “Robert’s Rules of Order” in school for various organizations, clubs and whatnot. But when I got out into the business world, I have to say I don’t remember ever having used it. Mostly people just blurted things out, and I’m fairly sure I did my share of blurting.
That being said, I still think about “Robert’s” now and again, and recently I juxtaposed “rule” and “law” and this cartoon popped out.
And I’m so glad it did! I got to draw Bigfoot, a man on fire, a man in his boxers and a woman with a duck on her head in the same cartoon! We cartoonists call that a win-win-win-win!
Comment ▼
Editor's Picks
Mark Anderson