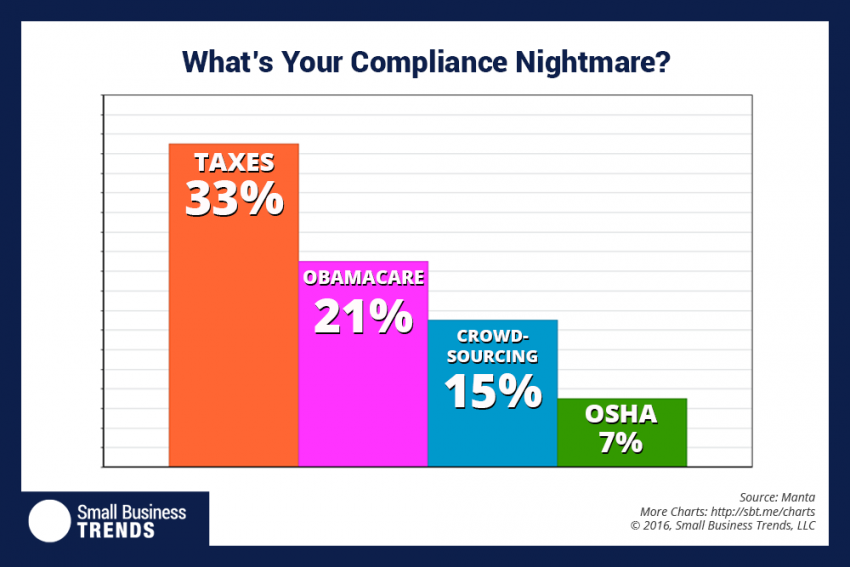 Small businesses are devoting more of their efforts toward compliance, just another way of describing the effort businesses put into dealing with government regulations.

And if small business owners are talking about it more and devoting more resources to it as part of the necessary process of running a business, that means there’s more of the proverbial red tape to deal with.

“2016 has already brought major changes at the federal and state levels, and more changes are on the horizon,” he said. “Entrepreneurs are trying to figure out how to remain profitable amidst the growing costs of compliance.”

Swanciger’s comments come on the heels of a new study by his company, the Semi-Annual Wellness Index, which gauges the small business community on several factors.

Small businesses tell Manta that compliance is a pain point on the federal, state and local levels.

What are the Top Compliance Issues?

The survey found that tax compliance was the top bête noire of small business owners. One in three of those surveyed by Manta confirmed that tax regulations — and the way they are constantly changing — are the most baffling.

If you were thinking Obamacare, known also as the Affordable Care Act, would be the biggest compliance nightmare for small business owners, you were close.

Obamacare compliance was picked as the most confusing by 21 percent of those responding to the Manta survey.

And complaints over regulations go much deeper than ideaology, the survey found.

Sure, some regulations are designed to protect the common good, but entrepreneurs say things have now reached a point where compliance is taking a substantial amount of time.

Manta’s survey show’s that 41 percent of owners say regulations have negatively impacted their operations. Nearly as many — 40 percent — said that compliance was costing them 1 to 5 hours per week. Ten percent said they spend between 6 and10 hours on compliance and another 11 percent spend at least 10 hours devoted to compliance issues.

So, how does your small business deal with the 40-pound-and-growing gorilla in the room?

But what you can do is arm yourself and your business with help and resources.

First, have a handy list of people on virtual standby whom you can call when there’s a tricky compliance issue. This could help shave hours off your week.

Manta also suggests joining local and other affiliated organizations that can help your business with compliance. This may even just be a group that keeps you informed of the latest in compliance updates.

Half of Manta’s respondents said they’re not getting these updates in a timely manner.

If you recognize that compliance is a growing problem for your business, it’s time to implement training programs that help make compliance requirements a part of your company’s routine.