iPhone, iPad Users: Ulysses Allows You to Work in WordPress, Dropbox – from Anywhere 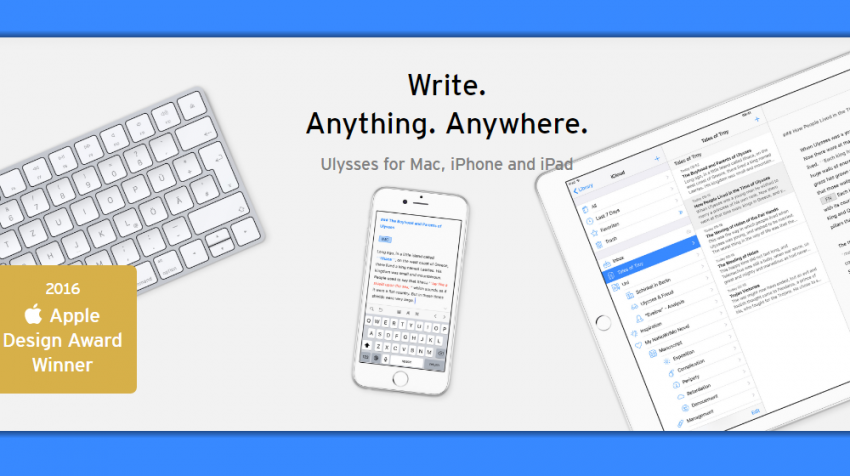 Working mobile is becoming hugely important for small businesses. And thanks to a recent update to the Ulysses writing app, small business owners who want to work in WordPress from their iPhone or iPad and also have access to Dropbox where they may be storing images, video or other content from a mobile device, can now do just that conveniently on iOS.

Ulysses App for Mac and iOS

Ulysses — a fully-fledged, plain text enhanced writing tool — debuted back in 2013 on the Mac App Store as a gorgeously elegant app for Mac. It has since introduced Ulysses for iOS.

The app for Mac, iPhone and iPad manages to stay completely out of your way when writing, providing a clean and intuitive workspace that can rival any distraction-free writing app.

“’Many options’ can easily become too many options, and ‘complex’ can get complicated,” The company says on its official website. “Ulysses confines to what is essential for writing, and keeps its advanced features out of the way until you actually need them.”

The latest Ulysses 2.6 updates, which are available for both the iOS and macOS, add some impressive and quite handy features to the app.

What’s New in the Ulysses 2.6 Update?

Ulysses 2.6 adds the ability to publish text straight to a WordPress site, complete with category, tags, excerpt, featured image and preview support. No more copy and paste, and switching between browsers. You can even schedule a post for later and setup multiple WordPress accounts in the app. Additionally, you can choose which blog you’d like to publish to for each new sheet. The app supports publishing not only to a WordPress.com blog, but also all self-hosted WordPress.org installations.

As with Mac, iPad and iPhone users can now also sync their content over Dropbox instead of via iCloud only. “You can now link your Dropbox account(s) and have any folder show up in Ulysses on iPad and iPhone, and use it just like you would Ulysses’ native iCloud/local storage,” wrote Marcus Fehn, Ulysses Co-founder and interface designer, in a blog post announcing the updates. “You get filters, manual sorting, all the markup, and, best of all, full search across all your linked folders.”

A popular feature of the Mac app has been ‘Quick Open,’ which is now available on the iOS app. As the name suggests, Quick Open lets you search your whole library, all your folders, whether on Dropbox or iCloud, and quickly open any document in Ulysses with just a single tap, says Marcus. For those with newer iPhones, this feature is also available via a 3D Touch action on the app icon on your home screen.

If you are a fan of focused writing, Ulysses 2.6 introduces a new Typewriter Mode. While this feature has been a part of Ulysses for Mac since version 1.1, version 2.6 Typewriter Mode for iOS and Mac has been completely revamped. It includes a “highlighting” feature known as Focus Mode. Activating Focus Mode will dim everything but the current line, sentence or paragraph. You can even adjust scrolling behavior.

“Many writers praise the way Ulysses encourages immersion with the text, and testify how using it has considerably increased their productivity,” company adds on its website. The company recently emerged as one of the winners of the prestigious Apple Design Awards 2016.

If you write a lot of reports, documents, blog posts or even books and would like to use Ulysses for iOS and Mac for the first time, the app is readily available for download. Ulysses for Mac can be found on the Mac App Store and costs $44.99, although a free trial version is also available. Ulysses for iOS is available as a universal app on the App Store priced at $24.99.

The cost of Ulysses for iOS and Mac, as you might have noticed, is not exactly cheap considering that apps like Evernote are free. But, Ulysses is a powerful, intuitive app with a fresh and clean feel.

“Yes, it sounds awesome, easy, and believe me: It is,” insists Fehn in his announcement. You be the judge.