Small Business Jobs Shine Deep in the Heart of Texas 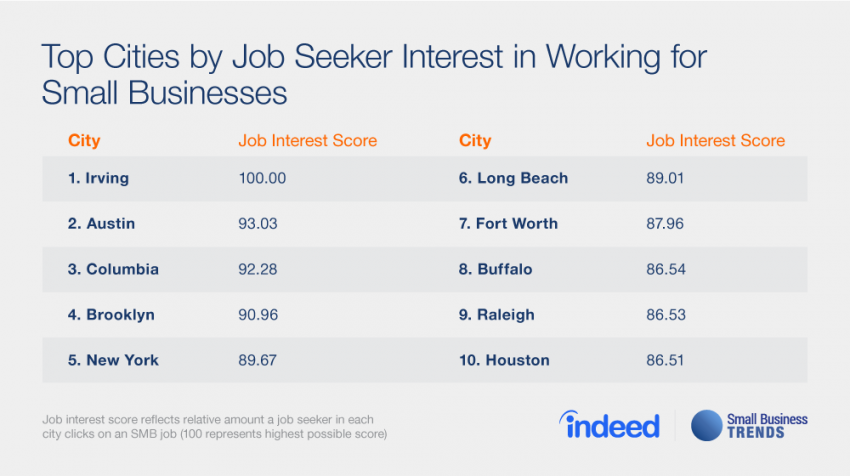 For one (good) reason or another, there are thousands upon thousands of people who would prefer to work for a small business.

Where are these people and where do they want to work?

That’s what Indeed set to find out with some recent research. And if you plan to hire people who’d rather work for a small business — and its owner —  you best get fitted for a new Stetson hat. Either that or move to New York City.

Indeed determined that more people searching for SMB jobs were Texans or people out-of-state who wanted to work under the Lone Star. The results could have also been a result of more small businesses in some Texas communities posting jobs.

Where People Want to Work for a Small Business

The top city for small business job seekers in the U.S. is Irving, Texas, which is the home city of the state’s beloved Dallas Cowboys.

The ranking is based on tracked clicks on posts at Indeed that advertised working with a small business in one form or another.

Number 2 on the Indeed list is Austin, Texas, the state capital and hipster haven. Fort Worth (#7) and Houston (#10) also made the list.

Job prospects with a missing desire for two-step dancing might look to the Empire State instead. New York placed three cities on Indeed’s list.

Columbia, South Carolina, sneaked in ahead of the New York cities at #3 on the list. Long Beach, California, was in at #6 on the list and the Triangle’s hub in Raleigh, North Carolina, rounded out the list at #9.