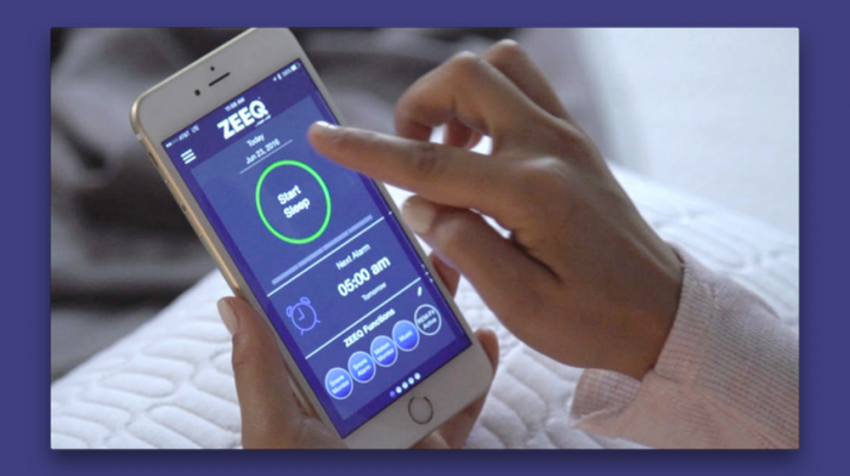 Artificial light, and now information and communications technologies are some of the factors responsible for people sleeping less, so it is fitting ZEEQ is using the same technology claiming to offer better quality sleep.

For entrepreneurs, the product can be seen as a unique approach to serving a very specific niche and as a possible tool for improving productivity by achieving more sleep.

ZEEQ is a smart pillow that streams music, claims to stop snoring and help you sleep smarter. It is currently on Kickstarter  having raised more than $328,000 with less than a week left on the campaign. The initial pledge goal was $50,000, and raising six times that amount probably says much about the sleep deprived state in which society finds itself.

According to Warrick Bell and Miguel Marrero, the creators of ZEEQ, this pillow monitors and reacts to your snoring, analyzes your sleep and intelligently wakes you up. It also plays music from Spotify, iOS Music, Android Music and the company’s own tracks with binaural beats.

Bell and Marrero might be surprised by the interest ZEEQ has received, but sleep deprivation is a serious problem for businesses across all sectors. According to a Harvard study, insomnia is responsible for 11.3 days being lost by the average worker in the US alone, which comes out to $63.2 billion annually.

Although the financial loss is staggering, the decisions made by employees and leaders that are not sleeping well could prove to be even more costly. Another study carried out by McKinsey & Company surveyed 81 organizations around the world with 189,000 people, and it revealed some startling information proving the link between effective leadership and a good night’s sleep.

Some of the mental capacities affected by leaders who did not sleep well include: attention, concentration, development of insight, learning and memory, decision making, emotional reactions and more. It goes without saying, if a decision is made while any of these capacities are impaired, the outcome could prove to be catastrophic. So it should not come as a surprise when 70 percent of the leaders in the study suggested sleep management should be taught in organizations, just like any other skills.

Apparently some companies have been doing this for some time. As reported by The Washington Post Goldman Sachs, Johnson and Johnson, and Google have different types of programs in place to increase sleep deprivation awareness and coaching by sleep experts.

With this in mind, the features of ZEEQ seem all the more timely with both business leaders and employees needing more sleep so they can be more productive.

ZEEQ claims to help you fall asleep by playing the music of your choice delivered through the pillow with eight precision placed speakers. You can set the timer so the music stops after you fall asleep, and that’s when the pillows other features kick in.

Using a 3-Axis gyroscope, vibration motors and individual decibel tuned microphone, developers claim the pillow listens and senses how you are sleeping. Based on the readings it gathers, it can gently vibrate so you can change your sleeping position if you happen to begin snoring. Additionally, the pillow records your movements to wake you up at the best time based on your sleep cycle.

ZEEQ has an app you can use with your smartphone to monitor the data, which includes Snore Score, and other health related options, such as your diet, exercise and other habits that could potentially contribute to how you sleep.

Currently the pillow is available through the Kickstarter campaign but it isn’t cheap. Options start at $179.

Whether you buy ZEEQ or not, you should do everything you can to improve the quality of your sleep. And if you have a small business, encourage your employees to do the same. Not only will they be more productive, but they will also be much healthier.

You can visit the Mayo Clinic site here for some other steps you can take for better sleep.