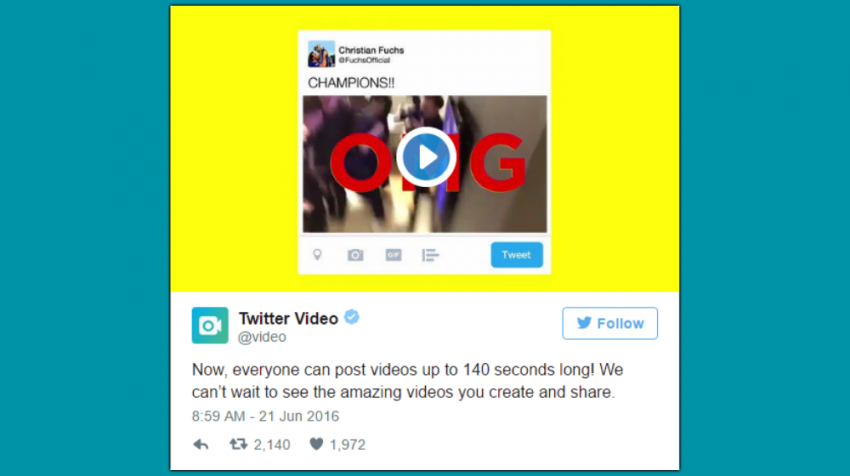 While companies better known for online video have been duking it out for supremacy in the field, Twitter and Vine have been quietly innovating.

Earlier this summer, Twitter announced extended lengths of Vine and Twitter (NYSE:TWTR) video uploads to 140 seconds. Here are a few things you should know about the increased video length.

Previously, uploaded videos on Twitter were limited to 30 seconds with those on Vine restricted to 6 seconds. However, with the new update, users on both platforms are now able to post longer, more comprehensive videos up to the new length.

You are now able to jump quickly into a full-screen viewing experience on both Vine and Twitter. You can shoot both horizontally and vertically. Rotate your phone to watch in widescreen.

Even Longer Videos for Partners

Selected Twitter partners get even longer video capabilities with the ability to post up to 10 minutes of video.

You can now also easily show your love and appreciation for the best parts of Vine videos by double tapping on the video screen.

The six-second Vine previews are still available, but your audience is able to watch more by clicking the “View More” button.

No Need to Direct to Other Platforms

Longer videos mean you no longer need to link your short video previews to another platform where your users can access longer videos. You can easily keep them entertained and interested on either Vine or Twitter.

Availability of a Watch More Button

Longer Vines now spot a watch more button so your followers can easily tap and watch your entire video.

Availability of a Suggested Videos Section

Vine is now sharing revenue with its most influential creators. Content creators can now use Twitter’s Amplify video ad program to run pre-roll ads alongside their Vine videos. Twitter/Vine keeps 30 percent of collected revenue while content creators get 70 percent.

Besides being able to use hashtags to search for videos, Vine also allows you to find vines using the categories section. Find anything between sports and comedy.

Ability to Connect Across Networks

Unlike Twitter where you have to use Twitter’s search button or hashtags that might not necessarily bring up the relevant videos, Vine has a dedicated search button that is mostly accurate. The fact they only deal with videos makes it easier to find your preferred video.

Vine now suggests the most appropriate videos for you to watch. The videos are now a tap away appearing at the top part of your Vine home screen.

Continued Use of .CO Domain

Ever wondered why Vine’s official site is Vine.co? Well, that’s because Vine.com is owned by Amazon.

Popular and on the Rise Videos on Vine

Unlike Twitter videos, Vine offers you a chance to view the most popular and the most interesting videos by clicking the “Popular Now” or “On the Rise” buttons.

Vine also allows you to update and even change your profile setting straight from their mobile app. Under your profile you will able to watch your videos posts and total likes.

Vine allows you to know the number of people that have watched your video. These are shown just above the video as “Loops”.

Besides the increase in the length of video that you can post, you can also easily link up both your Twitter and Vine accounts allowing people who follow your tweets to also reach your Vine profile. This allows you to build a bigger fan base.