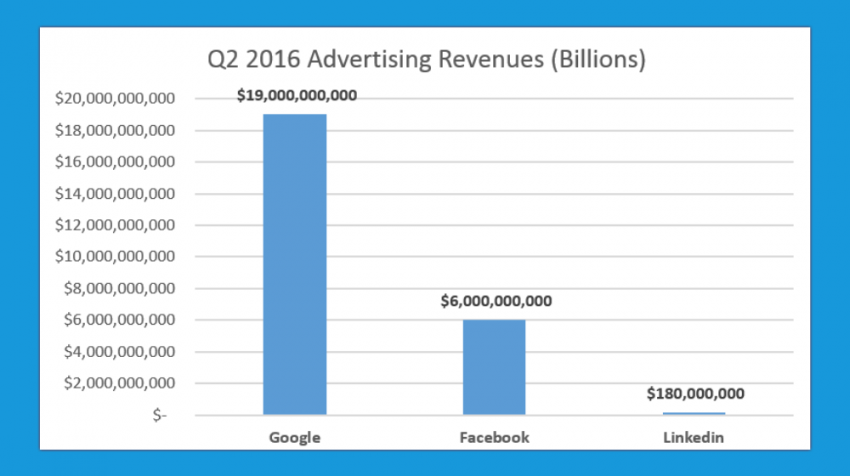 Like a lot of marketers, I find LinkedIn Ads frustrating. The thing is, by making just a few needed improvements, both LinkedIn itself and advertisers could greatly benefit.

For LinkedIn, advertising could be bringing in much more than a meager $181 million in revenues, as it did during the second quarter of 2016. Compare that to the advertising revenues of Google ($19 billion) and Facebook ($6 billion) during the same quarter.

For advertisers, better LinkedIn ads would offer some pretty obvious benefits. It would give brands and businesses another platform to reach LinkedIn’s 450 million professionals (although only a quarter of those users are reportedly active every month).

Then, in May 2015, the nice people at LinkedIn invited me to their headquarters to talk ads. 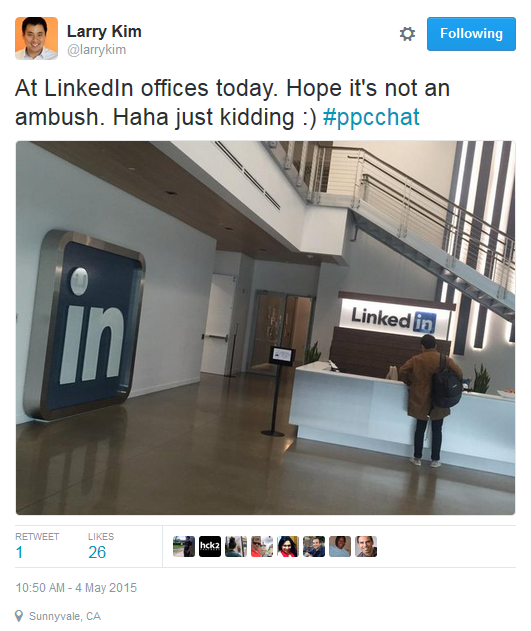 Luckily, there was no ambush! Actually, it was an awesome experience. I spoke with their brilliant product managers about some great things that they were thinking about.

So here we are, 18 months later, and my core question remains the same: if advertising isn’t a priority for LinkedIn, why should advertisers care about LinkedIn?

Have things improved in the last year and a half? Has LinkedIn, which was acquired by Microsoft for $26.2 billion, gotten its advertising act together?

Spoiler alert: not yet. LinkedIn has made some much-needed progress, but has a ton of deficiencies and remains a mediocre ad network.

Let’s count down the seven things I still hate about LinkedIn ads.

Why can’t we upload videos to LinkedIn? It’s kind of insane.

Video advertising is one of the most effective ways to bias people. 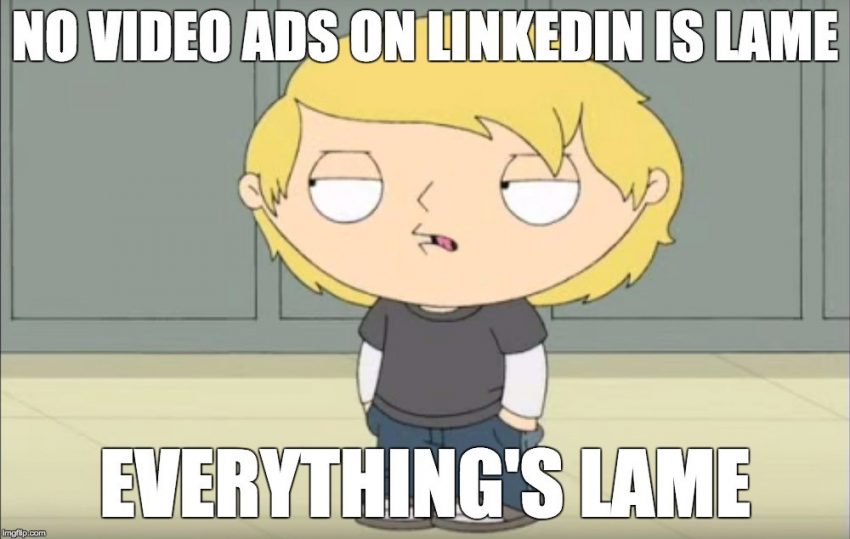 Remarketing has been around for more than six years. But my concern about LinkedIn Ads remains unchanged since last time:

“You can buy remarketing ads on Twitter, Facebook, on the Google Display Network, at YouTube, and even for Google Search – but you can’t get it on LinkedIn.”

Well, we’re still waiting. You don’t get points for “soon.” 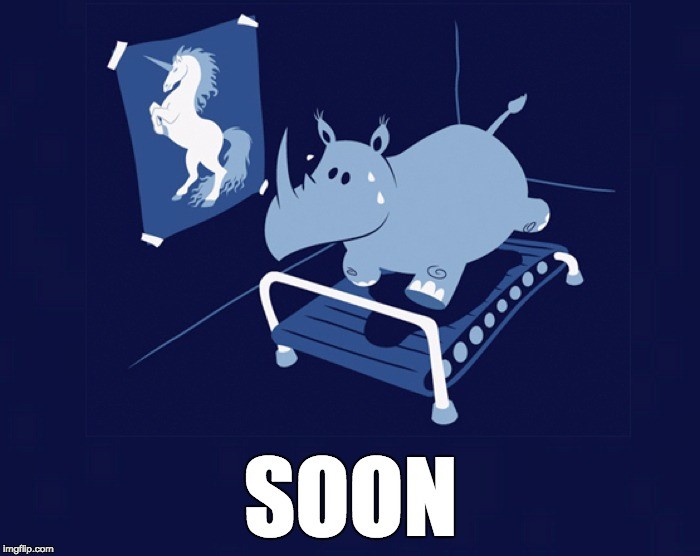 Meanwhile, the power of custom audiences on other platforms is actually getting stronger. Google now has Customer Match. And on Facebook you can overlay custom audiences with specific attributes, interests and demographics.

I can’t even begin to understand how a network for business professionals doesn’t offer advertisers a way to capture leads. You’ll have much more success doing lead generation on Twitter or using Lead Generation Ads on Facebook.

Yet here we are. Still nothing to see here from LinkedIn Ads. 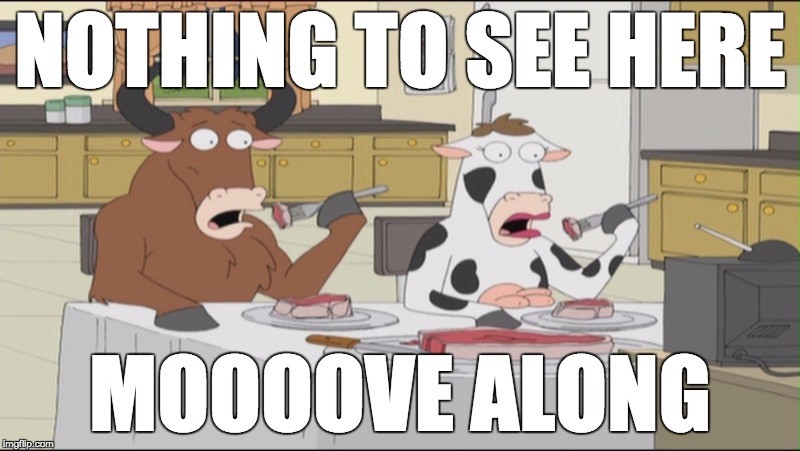 Last time I took LinkedIn to task for failing to try to deliver the best value to advertisers.

Well, it’s gotten worse since then for advertisers. Prices have gone up substantially. Look at these CPC prices – $8 bids?! 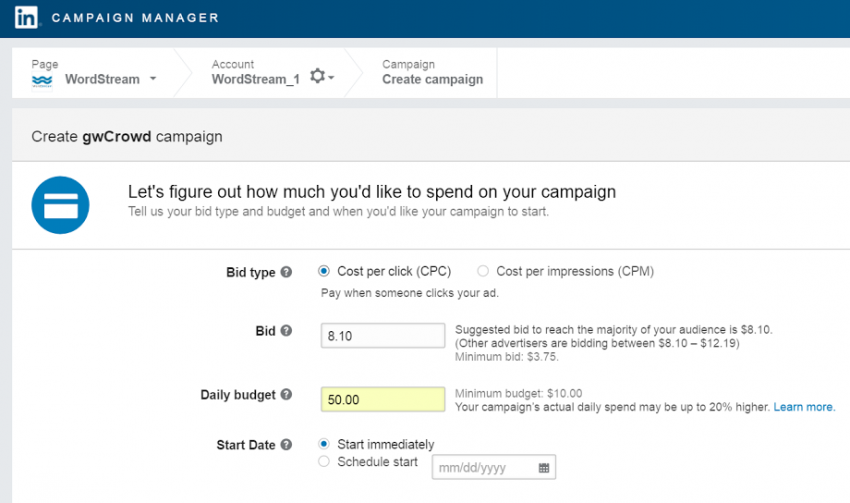 A true Quality Score system is missing from LinkedIn Ads.

There’s no reward for running unicorn ad campaigns on LinkedIn, even though Google, Facebook, and Twitter all dramatically reward advertisers for making the effort to create high-quality ads. Facebook and AdWords show advertisers the relevancy scores in their accounts to enable them to make optimizations.

On the flip side, the absence of a Quality Score on LinkedIn means there’s no penalty for having the worst, most boring donkey ad possible.

Some other platforms won’t show an ad if the engagement is too low. On LinkedIn, you can run terrible ads forever – even if it takes 20,000 impressions to generate a single click.

It also means my LinkedIn strategy is much different. I create lower funnel, high friction ads. For example: 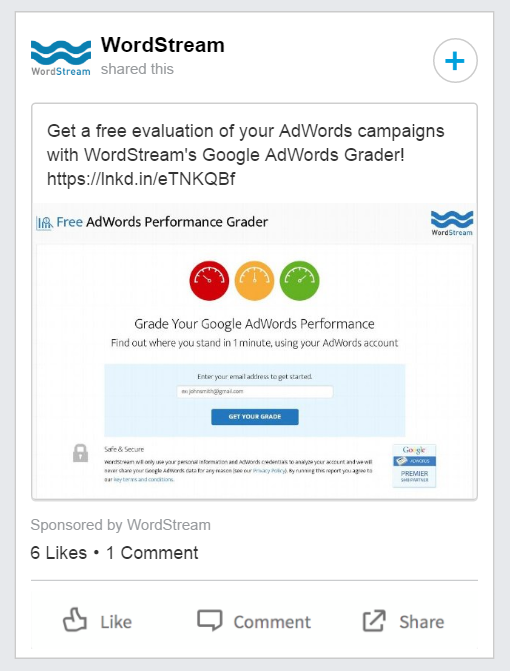 This is kind of like asking to get married on the first date! But if you’re going to pay $8 per click, you might as well ask people to take the action you really want them to take!

It’s a big ask. I would never do this on other display/social ad platforms. Rather, I’d do content promotion with the goal of remarketing to people who engage. But, again, there’s still no remarketing on LinkedIn.

Organic visibility on LinkedIn is remarkably good compared to Facebook. Unfortunately there’s no “Follower” ad campaign type. Last time I compared the lack of account promotion as trying to do social media with both arms tied behind your back.

“If you use [LinkedIn] ads to promote your Company Page, you have to just cross your fingers and hope that once they click through to your Page, they choose to follow it.”

Pardon my French, but…

If you want an ad format that will increase the number of people following your company page on LinkedIn, look elsewhere. You still won’t find this on LinkedIn.

OK, we’ve beaten up LinkedIn pretty good, but it’s only because we love them and want them to improve their advertising product.

LinkedIn has made two significant improvements:

I do this because I love LinkedIn. I really do! 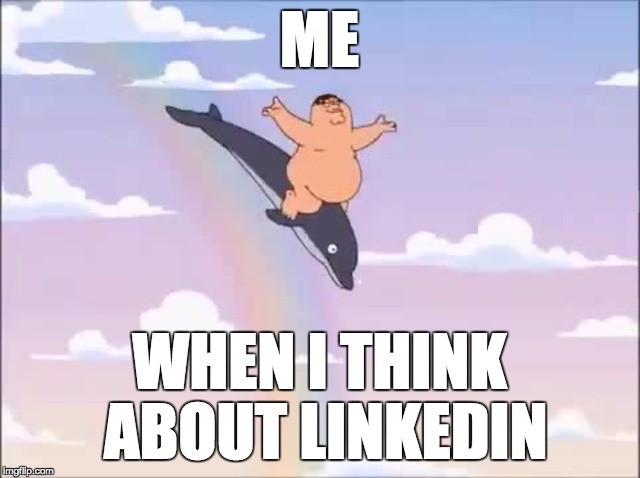 I’m just underwhelmed by their self-service ads. Advertising accounts for just 20 percent of LinkedIn’s revenues – that means they’re missing out on a huge opportunity.

LinkedIn is still absolutely essential, not just for individual professionals seeking exposure and new opportunities, but for companies seeking to maintain a strong organic presence, too. LinkedIn gets a lotof stuff right (such as LinkedIn Pulse, the platform’s excellent content recommendation engine), and I still think it’s an awesome service with many compelling features. (I shared some great tips for upping your content game on LinkedIn here.) Unfortunately, not enough has changed in the self-service platform over the past 18 months when compared to advances in other popular ad platforms. Hopefully, LinkedIn will soon recognize its full advertising potential and learn from Google, Facebook, and Twitter, and give us advertisers a fantastic self-service ads platform.