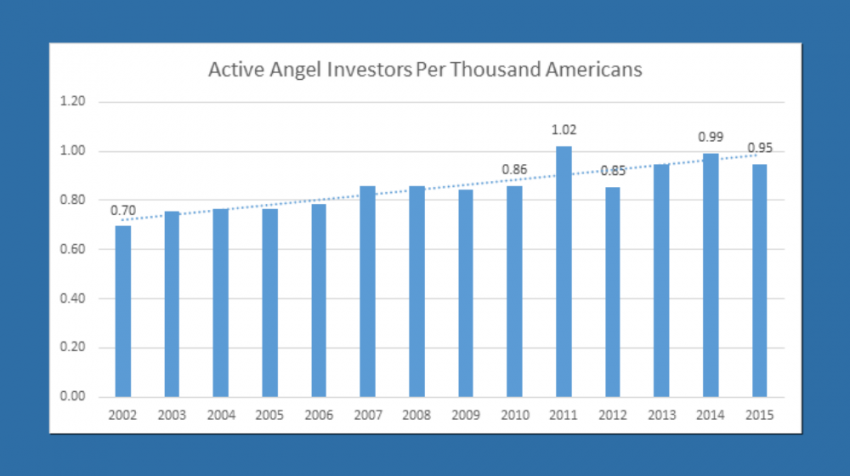 Angel investing — efforts by individuals to finance private companies owned and operated by people who are neither their friends nor their relatives — is substantially higher now than it was in 2002, when data tracking this activity first became available.

I compared data from the Center for Venture Research at the University of New Hampshire, which gathers annual data on angel activity in the United States, with Census Bureau data on the number of employer businesses and the population. That comparison reveals that angel-financed companies as a fraction of U.S. businesses with employees has increased substantially since 2002. In 2013, there were 13.99 angel-backed businesses per thousand employers as compared to 7.27 in 2002.

Unfortunately, the data on the number of employer businesses isn’t available for more recent years. But we can compare the number of angel investors to the population to see what has happened with angel investing more recently. As the figure below reveals, the “active angel” fraction of the U.S. population has also risen significantly since 2002. In 2015, the fraction was 36 percent higher than it was in 2002.

Angel investment activity has also increased relative to venture capital activity. In 2002, there were 13.3 angel-backed companies for every venture capital-financed business in the United States, a comparison of National Venture Capital Association and Center for Venture Research data shows. In 2015, that ratio was 19.2.

Similar patterns can be seen by comparing angels to VC funds. In 2002 there were 108.9 active angels for every venture capital fund in operation. In 2015, there were 249.1 active angels per active VC fund.

The development of equity crowdfunding can’t explain the rise in angel investment activity. The Jumpstart Our Business Startups (JOBS) Act that made equity crowdfunding possible wasn’t signed into law until 2012, and the Securities and Exchange Commission’s rules for non-accredited investor crowdfunding weren’t put into place until May of 2016. So equity crowdfunding’s implementation isn’t the explanation for the trends.

The growth of angel groups might account for the increase in angel investment activity between 2002 and 2007, but it cannot explain what has happened since 2007. Angel groups have not declined in number or membership since 2007 so they can’t be responsible for the post 2007 dip in angel activity. And besides, only a minority of angels are members of these groups.

If we ignore the 2011 data in the figure above, then general economic conditions are a plausible explanation for the trend. From 2002 to 2007, an economic expansion and housing boom boosted angel investment activity. That activity took a hit with the Great Recession. The subsequent recovery led to a relatively modest rebound in angel activity. Concerns about froth in the venture capital market in 2015 account for the recent dip.

The catch to this explanation is that it doesn’t explain the spike and fall in angel activity between 2010 and 2012. The per capita number of angels grew nearly 19 percent between 2010 and 2011, and then fell nearly 17 percent between 2011 and 2012, ending 2012 roughly where it had been in 2010. Not only is the size of these annual shifts improbably large, but the fact that the numbers ended up very close to where they started suggests that mis-measurement is the best explanation for what happened in 2011.

If we ignore that year, angel investment activity seems to track the economy, going up when it is good and declining when it is weak.

Image: Created from data from the Center for Venture Research and the U.S. Census Bureau