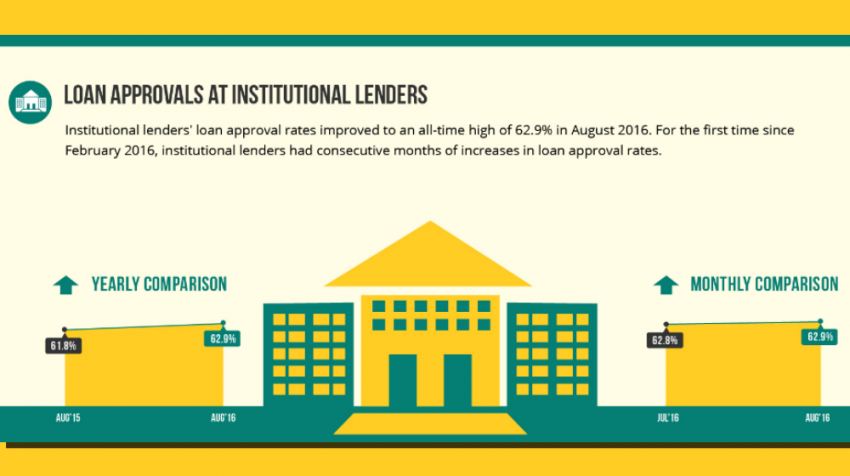 Things are beginning to look up for small businesses again.

After seeing a sharp decline in loan approvals from big banks in July, approval rates have bounced back in August 2016. That’s according to the latest Biz2Credit Small Business Lending Index, the monthly analysis of more than 1,000 small business loan applications on Biz2Credit.com.

The report has found that approval rates at big banks jumped to 23.3 percent in August, up two-tenths of a percent from July’s figure. Notably, it was the sixth time in the last seven months that lending approval rates improved among big banks.

“Now, a rate hike seems to be on hold indefinitely, and the banks find themselves behind in their target goals. They are aggressively seeking to close more deals.”

The report also found institutional lenders’ loan approval rates improving to an all-time high of 62.9 percent in August 2016. According to Arora, “The gradual ascent of institutional lenders is related to the attractive terms and the speed by which this category of lender can offer funding.”

He also added, “High yields and low default rates enables this category of lenders to approve a high percentage of loan requests.”

“Small banks are increasingly becoming more digitally savvy, but not enough of them are making it a top focus,” stated Arora. “Right now, money can be borrowed cheaply. Conventional rates are lower than SBA loans, which is a popular loan product that small banks utilize.”

Interestingly, many big banks have been squeezed out of some financial services businesses such as small business lending. Many banks, in fact, have a tough time profitably originating small loans. As a result, big banks like JPMorgan Chase are now partnering with online lenders.

“Banks are already well down the road to partnering with marketplace platforms for unsecured lending,” PricewaterhouseCoopers fintech co-lead Haskell Garfinkel told CNBC. “The biggest challenge right now is to consume it, integrate it and monetize it.”