Good for the Money: How Bob Benmosche Saved AIG From Itself 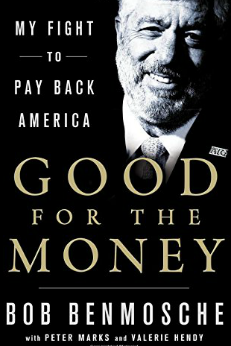 In between the first phone call Bob Benmosche received and the end was a heck of a story.

What is Good for the Money About?

“I don’t liquidate things. I build them.”
– – Bob Benmosche

Good for the Money is the story of AIG told from one of its CEOs who managed AIG in one of its most troubling times. This was the time of the “housing crisis” when ill-advised loans went into default putting the insurance company in ruins. Under normal circumstances, the US government would not have intervened but AIG’s business was critical to the economy. So, the government stepped in, serving as a lender to the company.

The chaotic environment that Bob Benmosche faced was evident if you looked at the number of CEOs before him, five in five years.

Benmosche wasn’t your ordinary CEO, though. He was a straight talker who didn’t hesitate to drop a curse word into a business conversation. Several times in the book, Benmosche told people (government officials, the board, etc.) where they could go and what they could do. He also wasn’t someone who would sugarcoat things to make you feel better.

But, Benmosche was also a person who stood up for the everyday person. He joined AIG because he believed in the company and wanted to help taxpayers get their money back. He saw in AIG an opportunity for American workers to prove they could get the job done.

He did it his way.

In what seemed like a miracle, Benmosche embarked on a journey that included plenty of air miles logged, battles with self-seeking board members, government questioning, intense media scrutiny and a struggle with personal illness on the way to achieving something that everyone thought was impossible.

Benmosche was the president of AIG for five years after working in various industries including MetLife, Arthur D. Little, and Information Science. He died of lung cancer in 2015.

Author Peter Marks is a theater critic for The Washington Post. His co-author is Valerie Hendy, an executive in AIG’s Corporate Citizenship department.

What Was Best About Good for the Money?

The best part of Good for the Money is the uncompromising, raw honesty that Benmosche brings to the book. Benmosche is frank about the situation he walked into, his approach to leadership and his own personal life. This approach provides readers with a unique look at the AIG crisis from the inside and a glimpse of business leadership under pressure. Because Benmosche is so honest, he provides access that many readers often don’t get in business biographies.

Good for the Money is a great story about a guy who proves Washington wrong by believing in himself and his team. That being said, the book delves rather deeply into the confusing waters of finance with talk about derivatives and other complex terms. A glossary or short introduction into this world might have helped those who aren’t familiar with these subjects.

That being said, the story is so powerful that you can still understand without fully grasping the finance or insurance industry.

Why Read Good for the Money?

If you have ever wondered what it felt like to work in AIG during the infamous crisis, Good for the Money will provide an excellent view into that world at that time. Benmosche details a little about the history of AIG, how it grew to its massive size, and what it did to get out of the pit that it fell into.

Good for the Money is also good for any executive-level manager or business owner. The situation Benmosche faced was high pressure. Benmosche isn’t afraid to share what worked and what didn’t. This unique look at leadership under pressure can offer a lot of insights small business owners who are facing tough decisions, especially situations that involve money.