These Jobs at Small Businesses Are the Least In Demand 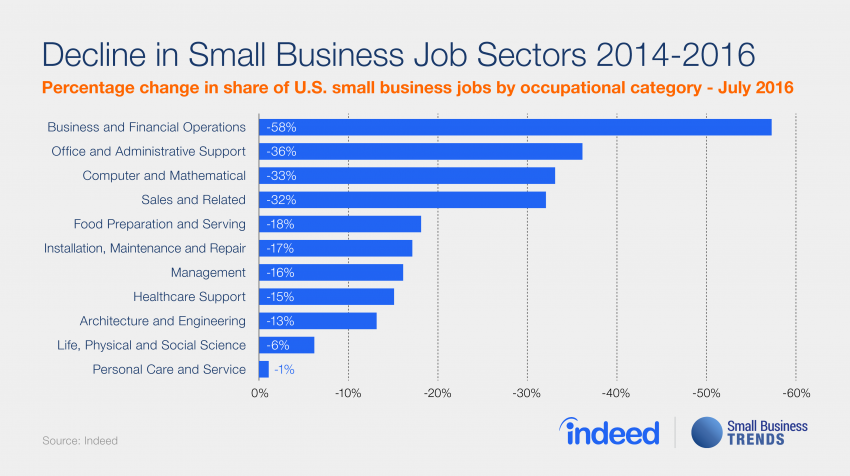 Data recently surfaced about which jobs and positions at small businesses across the U.S. are in high demand.

Small businesses have added tremendous amounts of help in the transportation and material moving categories in the last few years. But it seems automation of a lot of small business operations have led to a decline in the demand for the people that used to fill those jobs.

The latest set of data from Indeed backs that up fairly strongly.

In looking at small business jobs that have declined recently (between the years of 2014 and 2016), Indeed found that business and financial operations jobs have dropped sharply in that time, 58 percent. Office and administrative support jobs have dropped significantly, too, at a rate of 36 percent.

Jobs in the computer and mathematical category also saw a sharp drop, as have sales and related jobs at small businesses, falling 33 and 32 percent, respectively, over the same time.

Though Indeed does not come right out and say why these jobs are in such rapid decline at small businesses, it is reasonable to believe that a big reason behind this is the automation tools available to companies now — that weren’t necessarily available prior to 2014 — that can replace or at least attempt to replace these positions.

Until driverless rigs and drones dominate the roads and skies in this country, jobs in transportation and related categories would appear to be safe.

Other job categories on the decline within small businesses, according to Indeed, are food prep and serving (18 percent), installation, maintenance, and repair (17 percent), management (16 percent), healthcare support (15 percent), and architecture and engineering (13 percent).

Do these numbers relate to your small business? Have you seen less of a need for the positions less in demand most recently? Or is your business bucking the trend? Let us know in the comments below.